POTUS Says: Jihad Is Only a Figment of Our Imagination

Earlier today, Matt Apuzzo, of the Associated Press, led me straight down the rabbit-hole when he wrote that:

“President Barack Obama’s advisers will remove religious terms such as ‘Islamic extremism’ from the central document outlining the U.S. national security strategy and will use the rewritten document to emphasize that the United States does not view Muslim nations through the lens of terror, counterterrorism officials said.” 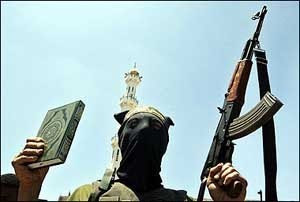 Hasn’t the American State Department learned that we are not at war with “terrorism,” but with “political Islam”? Which is not just a religion, but is also a political, economic, social, and military game plan?

Alright, trying to turn a diplomatic corner, trying a different approach, is understandable as long as we carefully distinguish “Islamism” from Islam. If this document utterly sugar-coats reality then we are, indeed, in deep and lasting trouble. I know that many activists believe that Islam is rotten at the core; that it is, by nature, militantly jihadic, expansionist, xenophobic, and barbaric. But I also know many Muslims who, whether they are secular or religious, describe another kind of Islam entirely, one that is spiritual, ethical, and essentially peaceful. These people believe that their version, or their own lived experience of Islam, has been hijacked, perverted, by “Islamists.” And that Westerners have collaborated with Islamists, have allowed them to become “gatekeepers” who keep the Muslim moderates out of the State Department, for example, and who alone certify who can become a Muslim chaplain in the American military.

I’ve been reading an excellent and important book on this very subject, just out, edited by Dr. Zeyno Baran: The Other Muslims. Moderate and Secular. Many of the contributors carefully distinguish between “Islamism” and Islam, and indeed, describe chilling and important examples of how the Muslim Brotherhood, increasingly funded by Saudi Wahhabi-Salafi oil money, has penetrated the West and has managed to silence the moderate Muslims. The original articles have been written by Muslim scholars, physicians, lawyers, and feminist activists, who grew up in Algeria, Iran, Morocco, Palestine, Syria and Turkey and who now live in Britain, France, Germany, Holland, Italy, and the United States.

They know what they are talking about.

Yes, our State Department wants to reach out to moderates in Muslim countries. However, it will find that many outspoken moderates are living in exile in the West. They will find others in jail, under siege, or censored, in Muslim countries. My suggestion: I urge President Obama and Secretary of State Clinton to start cultivating truly moderate and anti-Islamist Muslims as advisors. And to stop relying upon Islamists for advice.
Posted by jtf at 10:24 AM