There is no greater spur to hyperproliferation than the furling of the American nuclear umbrella. 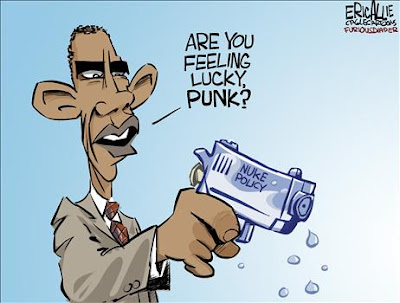 Nuclear doctrine consists of thinking the unthinkable. It involves making threats and promising retaliation that is cruel and destructive beyond imagining. But it has its purpose: to prevent war in the first place.

During the Cold War, we let the Russians know that if they dared use their huge conventional military advantage and invaded Western Europe, they risked massive U.S. nuclear retaliation. Goodbye Moscow.

Was this credible? Would we have done it? Who knows? No one’s ever been there. A nuclear posture is just that — a declaratory policy designed to make the other guy think twice.

Our policies did. The result was called deterrence. For half a century, it held. The Soviets never invaded. We never used nukes. That’s why nuclear doctrine is important.

The Obama administration has just issued a new one that “includes significant changes to the U.S. nuclear posture,” said Defense Secretary Bob Gates. First among these involves the U.S. response to being attacked with biological or chemical weapons.

Under the old doctrine, supported by every president of both parties for decades, any aggressor ran the risk of a cataclysmic U.S. nuclear response that would leave the attacking nation a cinder and a memory.

Again: Credible? Doable? No one knows. But the threat was very effective.

Under President Obama’s new policy, however, if the state that has just attacked us with biological or chemical weapons is “in compliance with the Non-Proliferation Treaty (NPT),” explained Gates, then “the U.S. pledges not to use or threaten to use nuclear weapons against it.”

Imagine the scenario: Hundreds of thousands are lying dead in the streets of Boston after a massive anthrax or nerve-gas attack. The president immediately calls in the lawyers to determine whether the attacking state is in compliance with the NPT. If it turns out that the attacker is up to date with its latest IAEA inspections, well, it gets immunity from nuclear retaliation. Our response is then restricted to bullets, bombs, and other conventional munitions.

However, if the lawyers tell the president that the attacking state is NPT noncompliant, we are free to blow the bastards to nuclear kingdom come.

This is quite insane. It’s like saying that if a terrorist deliberately uses his car to mow down a hundred people waiting at a bus stop, the decision as to whether he gets (a) hanged or (b) 100 hours of community service hinges entirely on whether his car had passed emissions inspections.

Apart from being morally bizarre, the Obama policy is strategically loopy. Does anyone believe that North Korea or Iran will be more persuaded to abjure nuclear weapons because they could then carry out a biological or chemical attack on the U.S. without fear of nuclear retaliation?

The naïveté is stunning. Similarly stunning is the Obama pledge to forswear development of any new nuclear warheads — indeed, to permit no replacement of aging nuclear components without the authorization of the president himself. This under the theory that our moral example will move other countries to eschew nukes.

On the contrary. The last quarter-century — the time of greatest superpower nuclear-arms reduction — is precisely when Iran and North Korea went hellbent into the development of nuclear weapons.

It gets worse. The administration’s Nuclear Posture Review declares U.S. determination to “continue to reduce the role of nuclear weapons in deterring non-nuclear attacks.” The ultimate aim is to get to a blanket doctrine of no first use.

This is deeply worrying to the many small nations that for half a century relied on the extended U.S. nuclear umbrella to keep them from being attacked or overrun by far more powerful neighbors. When smaller allies see the United States determined to move inexorably away from that posture — and for them it’s not posture, but existential protection — what are they to think?

Fend for yourself. Get yourself your own WMDs. Go nuclear if you have to. Do you imagine they are not thinking that in the Persian Gulf?

This administration seems to believe that by restricting retaliatory threats and by downplaying our reliance on nuclear weapons, it is discouraging proliferation.

But the opposite is true. Since World War II, smaller countries have agreed to forgo the acquisition of deterrent forces — nuclear, biological, and chemical — precisely because they placed their trust in the firmness, power, and reliability of the American deterrent.

Seeing America retreat, they will rethink. And some will arm. There is no greater spur to hyperproliferation than the furling of the American nuclear umbrella.

— Charles Krauthammer is a nationally syndicated columnist. © 2010, The Washington Post Writers Group.
Posted by jtf at 6:00 AM