How Much Taxation Is Enough? 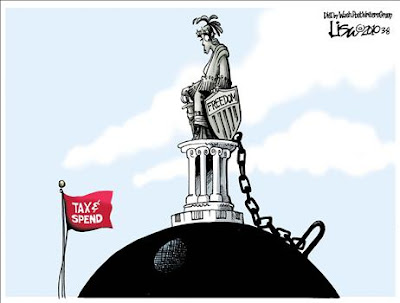 Congratulations! This is your last week working for the man -- at least for this year. The Tax Foundation calculates that Tax Freedom Day for 2010 is April 9, which means that by Friday, Americans will have spent nearly 100 days working just to pay their taxes. If Democrats have their way, Tax Freedom Day will keep getting later and later.

Hold that thought. Imagine for a moment that Tax Freedom Day was Dec. 31. In other words, picture working 365 days a year for the government. Now, the government would "give" you a place to sleep, food to eat and clothes to wear, but all your income would really be Washington's income to allocate as it saw fit. Some romantics might call this sort of arrangement "socialism" or "communism." But another perfectly good word for it is "slavery," or, if you prefer, involuntary servitude.

No one is proposing any such arrangement. But it's an important point conceptually. A 100 percent tax rate would be tyrannical not just because you have a right to own what you create, but because the government would necessarily decide what you can and can't have. Reasonable people can of course differ about where a tax rate becomes tyrannical, and we're far from that line in historical terms. But any amount of taxation can be unjust if it is being used for bad reasons, is applied discriminatorily or if it's taken without representation. (That's how the American Revolution started, after all.)

Individual liberty is far from the only concern, either. The kind of country we want to be is deeply bound up in taxation. The Tax Foundation estimates that some 60 percent of American families already get more from the government than they pay in taxes (and the top 10 percent of earners pay more than 70 percent of the income taxes). If all of President Obama's plans are enacted, that percentage will increase. We are heading toward being a country where instead of the people deciding how much money the government should have, the government decides how much money the people should have.

Only after they passed "ObamaCare" did Democrats clarify that this was one of their motives. ObamaCare's appeal has less to do with saving money -- which it won't do -- and more to do with spreading the wealth around. Senate Finance Committee Chairman Max Baucus, D-Mont., recently admitted that alleviating the "maldistribution of income in America" from the haves to the have-nots is one of the legislation's real benefits.

Of course, this will fuel the national debt, which has soared on both parties' watches ($12 trillion now and heading for $20 trillion in a decade), choking liberty in another way. We are levying tax obligations for generations to come. Our grandchildren didn't have much representation in that taxation.

There's also the simple fact that taxes impede growth, and low economic growth curtails the pursuit of happiness for everyone. Democrats are increasingly skeptical about this transcendently obvious point because they have convinced themselves that since government is better than the private sector when it comes to spending money wisely, it only makes sense to take money from the dumb private sector and let the smart government sector decide what to do with it. Well, no matter how dumb America's wealth-creators might be, they're smart enough to respond to incentives and disincentives. Indeed, since 1950, no matter where their tax rates have been, from as low as 28 percent to as high as 91 percent, the government's take has held at about 19.5 percent of GDP, suggesting that squeezing taxpayers harder doesn't necessarily yield more juice.

Personally, I have never understood liberalism's blind spot for liberty when it comes to taxation. A 24-hour waiting period before a teenager can have an abortion is an allegedly grotesque violation of individual freedom, but a federal government that takes vast amounts of your money -- the means by which you exercise your every freedom -- to distribute as it sees fit is "progressive"? The USA Patriot Act, whose threat to privacy was somewhere between entirely theoretical and nonexistent for the overwhelming majority of Americans, shocked the liberal conscience. But our income tax system -- made idiotically complex by both parties -- that demands countless hours of preparation and requires law-abiding citizens to reveal (and document!) many of their most private decisions to government inspectors every year is "reasonable." Yet many liberals even think complaining about this is a sign of right-wing dementia.

Now, under ObamaCare, the IRS is going to branch out into the field of health care, enforcing mandates and collecting fees. Perhaps it's not entirely paranoid to fear that this will make the IRS's past intrusions of proctological exactitude even less metaphorical.

I bring this up because many in the Democratic Party and in the news media have a hard time understanding what the "Tea Party" crowd is talking about when it complains of incipient tyranny and intrusive government. This might be why much of the media keep making up motives for the tea partiers rather than taking them at their word (as when a CNN reporter told viewers that the tea parties were driven by "anti-CNN" passions). Again, reasonable people can disagree with where the line between necessary taxation and injustice lies. But the line exists. Tax Freedom Day is going to come later and later, no matter what. Maybe we should figure out now where on the calendar we should mark down that line.

- Jonah Goldberg is editor-at-large of National Review Online.
Posted by jtf at 3:44 PM