We are nearing the climax of "tax season." That's the problem right there, by the way: Summer should have a season, and baseball should have a season, but not tax. Happily, like candy canes and Christmas tree lights on Dec. 26, the TurboTax boxes will soon be disappearing from the display racks until the nights start drawing in, and the leaves fall from the trees and tax season begins anew in seven or eight months' time. 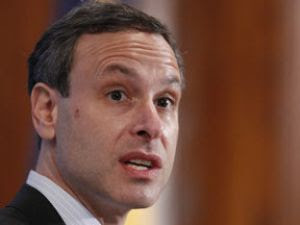 In this April 5, 2010 file photo, Internal Revenue Service Commissioner Douglas Shulman gestures while speaking at the National Press Club in Washington. Tax Day is a dreaded symbol of civic responsibility for millions of taxpayers, but for nearly half of all U.S. households, it's simply somebody else's problem. About 47 percent of U.S. households will pay no federal income taxes for 2009, either because their incomes were too low or because they qualified for enough credits and deductions to eliminate their tax liability, according to projections by a private research group. (AP)

And yet, for an increasing number of Americans, tax season is like baseball season: It's a spectator sport. According to the Tax Policy Center, for the year 2009 47 percent of U.S. households will pay no federal income tax. Obviously, many of them pay other kinds of taxes – state tax, property tax, cigarette tax. But at a time of massive increases in federal spending, half the country is effectively making no contribution to it, whether it's national defense or vital stimulus funding to pump monkeys in North Carolina full of cocaine (true, seriously, but don't ask me why). Half a decade back, it was just under 40 percent who paid no federal income tax; now it's just under 50 percent. By 2012, America could be holding the first federal election in which a majority of the population will be able to vote themselves more government lollipops paid for by the ever-shrinking minority of the population still dumb enough to be net contributors to the federal treasury. In less than a quarter-millennium, the American Revolution will have evolved from "No taxation without representation" to representation without taxation. We have bigger government, bigger bureaucracy, bigger spending, bigger deficits, bigger debt, and yet an ever smaller proportion of citizens paying for it.

The top 5 percent of taxpayers contribute 60 percent of revenue. The top 10 percent provide 75 percent. Another two-fifths make up the rest. And half are exempt. This isn't redistribution – a "leveling" to address the "mal-distribution" of income, as Sen. Max Baucus, D-Kleptocristan, put it the other day. It isn't even "spreading the wealth around," as then Sen. Barack Obama put it in an unfortunate off-the-prompter moment during the 2008 campaign. Rather, it's an assault on the moral legitimacy of the system. If you accept the principle of a tax on income, it might seem reasonable to exclude the very poor from having to contribute to it. But in no meaningful sense of the term can half the country be considered "poor." United States income tax is becoming the 21st century equivalent of the "jizya" – the punitive tax levied by Muslim states on their non-Muslim citizens: In return for funding the Islamic imperium, the infidels were permitted to carry on practicing their faith. Likewise, under the American jizya, in return for funding Big Government, the nonbelievers are permitted to carry on practicing their faith in capitalism, small business, economic activity and the other primitive belief systems to which they cling so touchingly.

In the Islamic world, the infidel tax base eventually wised up. You can see it literally in the landscape in rural parts of the Balkans: Christian tradesmen got fed up paying the jizya and moved out of the towns up into remote hills far from the shakedown crowd. In less mountainous terrain where it's harder to lie low, non-Muslims found it easier to convert. That's partly what drove Islamic expansion. Once Araby was all-Muslim, it was necessary to move on to the Levant, and to Persia, and to Central Asia and North Africa and India and Europe – in search of new infidels to mug. Don't worry, I'm not so invested in my analogy that I'm suggesting the Obama-Reid-Pelosi shakedown racket will be forced to invade Canada and Scandinavia. For one thing, pretty much everywhere else got with the Big Government program well ahead of America and long ago figured out all the angles: Two-thirds of French imams are on the dole. In the Stockholm suburb of Tensta, 20 percent of women in their late 40s collect disability benefits. In the United Kingdom, 5 million people – a 10th of the adult population – have not done a day's work since the New Labour government took office in 1997.

America has a ways to go to catch up with those enlightened jurisdictions, but it's on its way. Congressman Paul Ryan pointed out recently that, by 2004, 20 percent of U.S. households were getting about 75 percent of their income from the federal government. As a matter of practical politics, how receptive would they be to a pitch for lower taxes, which they don't pay, or lower government spending, of which they are such fortunate beneficiaries? How receptive would another fifth of households, who receive about 40 percent of their income from federal programs, be to such a pitch?

And what's to stop this trend? Democracy decays easily into the tyranny of the majority, in which 51 percent of voters can empty the pockets of the other 49 percent. That's why a country on the fast track to a $20 trillion national debt exempts half the population from making an even modest contribution to reducing it. And it's also why the remorseless shriveling of the tax rolls is a cancer at the heart of republican citizenship.

Pace Max Baucus, this isn't about correcting the "mal-distribution" of income. What Mal Max is up to is increasing dependency. In the newspeak of Big Government, "tax cuts" now invariably mean not reductions in the rate of income seizure but a "tax credit" reimbursed from the seizure in return for living your life the way the government wants you to. With Obamacare, we've now advanced to the next stage – "tax debits," or additional punitive confiscation if you decline to live your life in accordance with government fiat. Obamacare requires you, upon penalty of law, to make provisions for your health care that meet the approval of the state commissars. Unfortunately, as they discovered after passing it, the bill didn't provide for any enforcement mechanisms. But not to worry. The other day Douglas Shulman, commissioner for the Internal Revenue Service, announced that, if you fail to purchase the mandated health insurance, he'll simply confiscate any tax refund due to you in from your previous 12 months' employment withholding.

We are now not merely disincentivizing economic energy but actively waging war on it. If 51 percent can vote themselves government lollipops from the other 49 percent, soon, 60 percent will be shaking down the remaining 40 percent, and then 70 percent will be sticking it to the remaining 30 percent. How low can it go? When you think about it, that 53 percent of American households prop up not just this country but half the planet: They effectively pick up the defense tab for our wealthiest allies, so that Germany, Japan and others can maintain minimal militaries and lavish the savings on cradle-to-grave entitlements. A relatively tiny group of people is writing the check for the entire global order. What proportion of them would need to figure out the game's no longer worth it to bring the whole system crashing down?