Flying before 9/11 was already awful, and it has only become worse. 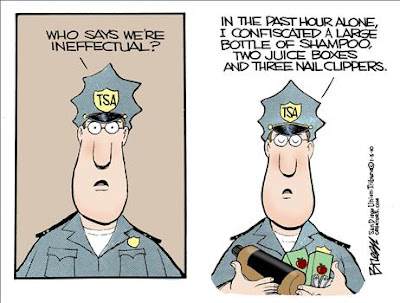 Almost exactly ten years ago, I boarded a Northwest Airlines plane in Minneapolis. As I started toward my veal-pen seat in steerage, I saw the faces of the preboarded aristocrats in business class. But before I could glare at them with proletarian rage and envy, I heard a loud bang and felt a sharp pain on the top of my head. Everyone looked to see what the sound was; even the two flight attendants chatting like village women around the well broke off their no-doubt-vital conversation.

The source of the preflight disturbance? I’d smacked my enormous gourd of a head on a television hanging from the ceiling above the center aisle that hadn’t been stowed for boarding. I lifted my hand to my scalp and drew back a palm glistening with fresh blood.

The response from the flight attendants? A shrug from one and the faint hint of a chuckle from another. They went back to their conversation. Dumbfounded, I proceeded to my seat to nurse my head wound, fuming over the fact that customer service at even the most rancid highway-rest-stop taco joint requires providing a moist towelette for seeping head wounds.

Well, for starters, it’s a small reminder that flying before 9/11 was already awful, and it has only become worse.

Over the weekend, an idiot walked the wrong way through a secure exit for arriving passengers at Newark airport. An entire terminal was shut down so that everybody on the “sterile” side of the security barriers could be herded back out and rescreened. The entire process took just under seven hours. The cascading delays disrupted air travel worldwide. They didn’t even catch the doofus who caused the ruckus. No doubt, if they’d announced his location over the paging system, he’d have been drawn and quartered by a mob of traveling salesmen from 3M and a gaggle of middle-school girls returning from a volleyball tournament.

Now, I should back up. When I referred to the “sterile” side of the security barrier, I was using the term narrowly, to refer to folks who’d been through the metal detectors. Because to use the word “sterile” in its usual context in a sentence with “airports” — those belching Petri dishes of bathroom effluence and unidentifiable noisome miasma — would be a grotesque abrogation of journalistic trust.

According to the latest epidemiological research, airports reside somewhere between no-frills Haitian brothels and Penn State fraternity bathrooms when it comes to hygiene. USA Today recently surveyed the health-inspection records of airport restaurants and found that serious code violations were as commonplace as rat and mouse droppings; 77 percent of 35 restaurants reviewed at Reagan National Airport had at least one major violation.

I could go on, of course. The petty humiliations, the routine deceptions from airline employees desperate to rid themselves of troublesome travelers (“Oh, they can definitely help you at the gate!”), the stress-position seats, the ever-changing rules for what can and cannot be in your carry-on, being charged for food that the Red Cross would condemn if it were served at Gitmo: Air travel is the most expensive unpleasant experience in everyday life outside the realm of words ending in -oscopy.

And speaking of unwelcome intrusions, the current debate over the “underwear bomber” is important and necessary, but it is detached from basic reality. To listen to the experts, the only relevant choice is between privacy and security. But the average person already understands that privacy is something you have to compromise to fly. The white zone has been for unloading your dignity and civil liberties for generations. This isn’t to say that retaining what’s left of our privacy isn’t an important priority. But I, for one, would gladly sacrifice more privacy in exchange for more decency and efficiency. As it stands, Shlomo Dror, an Israeli air-security expert, had it right in 2002 when he said: “The United States does not have a security system; it has a system for bothering people.”

Public-private partnerships are all the rage these days. Progressives insist the judicious application of regulations, the cooperation of “responsible” corporations, and the acquiescence of the American people are all that’s needed to deliver everything from high-quality and affordable health care to “green” cars that run on little more than love for mother Earth.

No realm of American life is as auspiciously fecund with precisely such conditions as air travel. So — put up or shut up.


— Jonah Goldberg is editor-at-large of National Review Online and the author of Liberal Fascism: The Secret History of the American Left from Mussolini to the Politics of Meaning. © 2010 Tribune Media Services, Inc.
Posted by jtf at 10:55 AM