September 10? It’s Worse Than That

We are ignoring the best tools we have for fighting terrorism. Why? 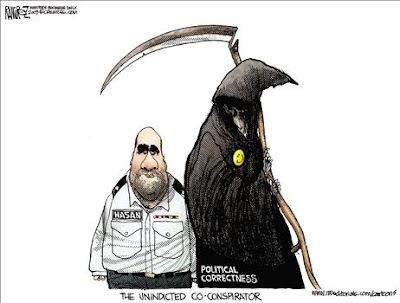 ‘September 10 America.” The phrase signifies a reprise of the “terrorism is just a crime” mindset that reigned in the years before the 9/11 attacks. Like other observers, I’ve groused in recent months that we are back to that self-destructive ethos. I was wrong. If the Fort Hood atrocity tells us anything, it is that things are much worse than they were before 9/11.

For one thing, 9/11 has happened. Before it did, perhaps we had an excuse. But we’ve experienced the wages of consciously avoiding Islamism. To have retreated into puerile fantasies about a religion of peace is, at this juncture, unfathomable.

Fathom it, though, we must. In 2008, I wrote a book called Willful Blindness to describe government’s stubborn refusal to deal with the nature and magnitude of jihadism when it first emerged as a domestic threat in the early Nineties. For a long time, I’d resisted writing about the experience of prosecuting Muslim terrorists. I’m very proud of what we did, but the story is a painful one of warning signs missed and lives lost. Having lived it, I wasn’t anxious to relive it.

Yet, more than a decade after Muslim terrorists declared war on the United States by bombing the World Trade Center, we were still making the same errors, with wishful thinking about Islam still substituting for sober analysis. It seemed important to go back to the beginning, to explore why jihadism is a profound threat, why we’ve underestimated it, and why it is so perilous to treat a national-security challenge as if it were a mere legal problem. In a display of my own wishful thinking, I subtitled the book “A Memoir of the Jihad” — memoir conveying the hope that the worst of the willful blindness was behind us, and that the misjudgments of the past would yield wisdom in the here and now.

The first possibility would not pass the laugh test if this were a laughing matter. Anonymous government officials have suggested that the substance of the conversations was innocuous. That remains to be seen — we can’t know until we learn exactly what was said, how it was acted on, who else may have been in the loop, and so on. But even if you buy the innocent-substance theory (I don’t), the occurrence of the communications — between an Islamist infiltrator in our armed forces and a known al-Qaeda recruiter who ministered to some of the 9/11 hijackers — could not be more significant. The mere circumstances were more than enough to turn up the investigative heat.

That’s so palpable that we must worry that about the second possibility: That the FBI and the Justice Department have convinced themselves that the Constitution really is a suicide pact — that a mainstream construction of Islam, calling for our demise as a free people, is somehow insulated from inquiry because we don’t want to confront the stubborn fact that Islamist terror is instigated by Islamic doctrine.

Journalism in the last week has been a feast of fables about Islam, libels about military culture, and gut-wrenching accounts of sorrow and heroism. But the most disturbing thing I’ve read is Ron Kessler’s Newsmax column. It addressed little not already known about the mass murder, but Ron has singularly good sources in the FBI. He provides a window into Bureau thinking that makes the mind reel.

Besides grossly low-balling the number of U.S. mosques that propagate Islamist ideology — the Feebs say it’s about 10 percent of 2,000 mosques; it’s actually about six to eight times that amount — a top FBI counterterrorism official told Kessler:

Those who actively support extremist causes, say America is evil and deserves what it gets, and celebrate the death of soldiers, know they may come to our attention. So they don’t do it as openly now . . . . There was much more of that [before 9/11] because all of it was considered by Justice Department guidelines to be purely protected speech. We do not have incitement laws in America, but once an imam facilitates someone else taking action, he has crossed the line into material support and becomes our business.

Where to begin? Almost 17 years ago, after the Trade Center was bombed, the Justice Department did not believe a Muslim cleric had to “cross the line into material support” before he became the FBI’s business. Indeed, there were no “material support” laws until 1996. In 1995, as detailed in Willful Blindness, I led the team that convicted Omar Abdel Rahman, the “Blind Sheikh.” In essence, we prosecuted him for inciting terrorism­ — the thing the senior official tells Kessler isn’t a crime. Specifically, the Blind Sheikh was convicted of (among other things) soliciting an attack against a U.S. military installation (like Hasan just committed) and soliciting the murder of Egyptian president Hosni Mubarak.

Solicitation is still a federal crime — and there’s no requirement that the incitement actually lead to a terrorist act. Moreover, even before anyone in America ever heard of al-Qaeda — even before there was a 9/11, or bombings of Khobar Towers, the U.S. embassies in eastern Africa, and the U.S.S. Cole — some of us realized that terrorists fueled by viscerally anti-American Islamist ideology, were at war with the United States. And guess what? There’s a statute for that, too: The Civil War–era seditious-conspiracy law makes the waging of such a terror campaign a 20-year felony. And there’s no carve-out for imams.

How was the Blind Sheikh convicted? By presenting to the jury his fiery sermons and private meetings with the faithful, often in mosques where he urged barbarous strikes against America, swaddled in accurate quotations of the Koran and other Muslim scripture. Of course, he claimed that such exhortations were protected speech. That is, he made exactly the same arguments the Islamist Left has spent the last eight years beating into the country, including into the Justice Department and the FBI. But back in 1995, those arguments were seen for the nonsense that they were.

There is no bar to the use of speech as evidence. The First Amendment generally prohibits the criminalization of speech itself — i.e., the act of communicating. But settled law holds that when prosecutors use your speech to prove crimes, there is no First Amendment violation. When the mafia boss tells the button-man “Whack him!” he doesn't get to lodge a First Amendment objection to the introduction of that statement at his murder trial. He’s not being tried for saying “Whack him!” He’s being tried for murder. The statement is evidence.

Nor does the principle change just because the speech happens to implicate religion. In America, you can believe whatever you want, but your actions must be lawful. Not surprisingly, the Blind Sheikh contended that his incitements to terror were beyond prosecution because he was practicing his religion: Specifically, he claimed he had simply been performing the traditional role of an Islamic cleric called on to determine whether proposed courses of conduct (in this instance, mass-murder plots) were permissible under Islamic law. Fourteen years ago, that contention was properly seen as frivolous. In America, we are not under sharia law — not yet. There is no religious exception for violent acts, conspiracies, and incitements to violence that violate American law.

So what has happened? Why did we know these rudimentary, commonsense principles in the Nineties but not now? Because incitement explodes the government’s “religion of peace” narrative. The incitement to Islamist terror is Islamic scripture. The Blind Shiekh was not a hypnotist or a particularly compelling speaker. His authority over terrorist organizations was rooted exclusively in his acknowledged mastery of sharia. Islamic scripture was the source of his power over Muslims.

To concede this would be to concede the obvious but unspeakable fact that there is a nexus between Islam and terror. That would harpoon the lovey-dovey dream that Islam and Western democracy are perfectly compatible. It would upset Muslims — especially the well-organized, deep-pocketed Islamic grievance industry. Today’s hip, progressive FBI, like Gen. George Casey’s modern, slavishly “diverse” military, doesn’t want to upset Muslims. Besides souring State Department cocktail parties and drying up funding for presidential libraries, upsetting Muslims would put a damper on our government’s lavish “Islamic outreach” efforts. These initiatives are premised on the delusion that we’ll stop more terror by having unindicted co-conspirators like CAIR teach Islamic “sensitivity” to our agents than by turning our agents loose to investigate CAIR and its ilk.

So the FBI ignores the significance of a terrorist cleric’s influence over an unabashed Islamist in our midst. After all, their contacts seemed to be religious in nature. We’re told, moreover, that we can’t do anything about the anti-American vitriol oozing out of Islamist mosques under the guidance of our friends the Saudis. After all, the vitriol hasn’t yet “crossed the line into material support.” By the time it does, you might have 13 corpses to tend to, but at least there will be lots to talk about at the next outreach conference — or the next time the attorney general decides to speak at a CAIR-fest.

The post-9/11 era was supposed to be about knocking down walls that obstructed effective counterterrorism. But behold the new wall, more insidious than its suicidal Nineties forerunner: the arbitrary barrier separating terrorism from “protected” incitement — the cagey, generalized, non-specific jihadist rhetoric that is the Islamist cleric’s stock-in-trade. Aside from not being required by law, this new wall will usually mean you can't go after the worst actors (the Islamic authorities and the terrorists they inspire) until after an attack has happened and Americans have been killed.

In other words, be prepared for more Fort Hoods. We’re not in September 10 America. We’ve managed to land in a much more dangerous place.

— National Review’s Andrew C. McCarthy is a senior fellow at the National Review Institute and the author of Willful Blindness: A Memoir of the Jihad (Encounter Books, 2008).
Posted by jtf at 7:10 PM