A jihadist hiding in plain sight

How many deaths are acceptable for the sake of diversity? 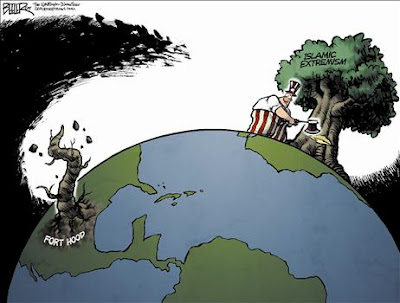 Shortly after 9/11, there was a lot of talk about how no one would ever hijack an American airliner ever again – not because of new security arrangements but because an alert citizenry was on the case: We were hip to their jive. The point appeared to be proved three months later on a U.S.-bound Air France flight. The "Shoebomber" attempted to light his footwear, and the flight attendants and passengers pounced. As the more boorish commentators could not resist pointing out, even the French guys walloped him.

But the years go by, and the mood shifts. You didn't have to be "alert" to spot Maj. Nidal Hasan. He'd spent most of the past half-decade walking around with a big neon sign on his head saying "JIHADIST. STAND WELL BACK." But we (that's to say, almost all of us; and certainly almost anyone who matters in national security and the broader political culture) are now reflexively conditioned to ignore the flashing neon sign. Like those apocryphal Victorian ladies discreetly draping the lasciviously curved legs of their pianos, if a glimpse of hard unpleasant reality peeps through we simply veil it in another layer of fluffy illusions.

Two joint terrorism task forces became aware almost a year ago that Maj. Hasan was in regular e-mail contact with Anwar al-Awlaqi, the American-born but now Yemeni-based cleric who served as imam to three of the 9/11 hijackers and supports all-out holy war against the United States. But the expert analysts in the Pentagon determined that this lively correspondence was consistent with Maj. Hasan's "research interests," so there was no need to worry. That's America: Technologically superior, money no object (not one but two "joint terrorism task forces" stumbled across him). Yet no action was taken.

On the other hand, who needs surveillance operations and intelligence budgets? Maj. Hasan was entirely upfront about who he was. He put it on his business card: "SOA." As in "Soldier of Allah" – which seems a tad ungrateful to the American taxpayers who ponied up half a million bucks or thereabouts in elite medical school education to train him to be a Soldier of Uncle Sam. In a series of meetings during 2008, officials from both Walter Reed and the Uniformed Services University of Health Sciences considered the question of whether then-Capt. Hasan was psychotic. But, according to at least one bigwig at Walter Reed, members of the policy committee wondered "how would it look if we kick out one of the few Muslim residents." So he got promoted to major and shipped to Fort Hood, Texas.

And 13 men and women and an unborn baby are dead.

Well, like they say, it's easy to be wise after the event. I'm not so sure. These days, it's easier to be even more stupid after the event. "Apparently, he tried to contact al-Qaida," mused MSNBC's Chris Matthews. "That's not a crime to call up al-Qaida, is it? Is it? I mean, where do you stop the guy?" Interesting question: Where do you draw the line?

The truth is, we're not prepared to draw a line even after he's gone ahead and committed mass murder. "What happened at Fort Hood was a tragedy," said Gen. Casey, the Army's chief of staff, "but I believe it would be an even greater tragedy if our diversity becomes a casualty here." A "greater tragedy" than 14 dead and dozens of wounded? Translating from the original brain-addled multicult-speak, the Army chief of staff is saying that the same fatuous prostration before marshmallow illusions that led to the "tragedy" must remain in place. If it leads to occasional mass murder, well, hopefully it can be held to what cynical British civil servants used to call, during the Northern Irish "Troubles", "an acceptable level of violence." Fourteen dead is evidently acceptable. A hundred and forty? Fourteen hundred? I guess we'll find out.

"Diversity" is one of those words designed to absolve you of the need to think. Likewise, a belief in "multiculturalism" doesn't require you to know anything at all about other cultures, just to feel generally warm and fluffy about them. Heading out from my hotel room the other day, I caught a glimpse of that 7-Eleven video showing Major Hasan wearing "Muslim" garb to buy a coffee on the morning of his murderous rampage. And it wasn't until I was in the taxi cab that something odd struck me: He is an American of Arab descent. But he was wearing Pakistani dress – that's to say, a "Punjabi suit," as they call it in Britain, or the "shalwar kameez," to give it its South Asian name. For all the hundreds of talking heads droning on about "diversity" across the TV networks, it was only Tarek Fatah, writing in The Ottawa Citizen, who pointed out that no Arab males wear this get-up – with one exception: Those Arab men who got the jihad fever and went to Afghanistan to sign on with the Taliban and al-Qaida. In other words, Maj. Hasan's outfit symbolized the embrace of an explicit political identity entirely unconnected with his ethnic heritage.

Mr. Fatah would seem to be a genuine "multiculturalist": That's to say, he's attuned to often very subtle "diversities" between cultures. Whereas the professional multiculturalist sees the 7-Eleven video and coos, "Aw, look. He's wearing ... well, something exotic and colorful, let's not get hung up on details. Celebrate diversity, right? Can we get him in the front row for the group shot? We may be eligible for a grant."

The brain-addled "diversity" of Gen. Casey will get some of us killed, and keep all of us cowed. In the days since the killings, the news reports have seemed increasingly like a satirical novel that the author's not quite deft enough to pull off, with bizarre new Catch-22s multiplying like the windmills of your mind: If you're openly in favor of pouring boiling oil down the throats of infidels, then the Pentagon will put down your e-mails to foreign jihadists as mere confirmation of your long-established "research interests." If you're psychotic, the Army will make you a psychiatrist for fear of provoking you. If you gun down a bunch of people, within an hour the FBI will state clearly that we can all relax, there's no terrorism angle, because, in our over-credentialized society, it doesn't count unless you're found to be carrying Permit #57982BQ3a from the relevant State Board of Jihadist Licensing.

Ezra Levant, my comrade in a long battle to restore freedom of speech to Canada, likes to say that the Danish cartoons crisis may one day be seen as a more critical event than 9/11. Not, obviously, in the comparative death tolls but in what each revealed about the state of Western civilization. After 9/11, we fought back, hit hard, rolled up the Afghan camps; after the cartoons, we weaseled and equivocated and appeased and signaled that we were willing to trade core Western values for a quiet life. Watching the decadence and denial on display this past week, I think in years to come Fort Hood will be seen in a similar light. What happened is not a "tragedy" but a national scandal, already fading from view.