The notorious No.6 died this past February, and this has made for a quiet autumn rutting season nearly concluded among the elk (C. Canadensis nelsoni) on Yellowstone's northern range. The late bull has been described in the local media as the "Elvis of elk." He was quite popular with the girls, er, cows. "It was certainly eerily calm this fall compared to when No.6 was around," Yellowstone elk biologist P.J. White told AP. When found last winter, it seems No.6 had attempted to jump over a barbed wire fence on a ranch just north of the Park, got tripped-up, and ended up on his back with his great antlers underneath him, and suffocated while trapped between two boulders. He was approximately fifteen years old (some elk live to be twenty, so he was on the cusp of old age) and weighed 725 pounds (average mature bull -- 700). No.6 got his numerical moniker because he was studied and eartagged by wildlife biologists a few years ago as he was maturing to be the dominant bull in the area around Mammoth Hot Springs, the administrative headquarters of Yellowstone National Park. 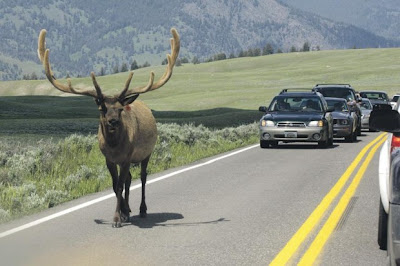 No.6 had a long tenure as King of the Bull Elk. In his heyday during the annual fall rut he was attended by a large harem of cow elk (approximately 25), and his instinctual possession of them made him the jealous type, normal for the species. Every year, No. 6 jousted with up-and-coming bulls by the common ungulate modus operandi of locking horns in a pushing and shaking struggle, and he always prevailed. When bulls engage in these contests, the level of testosterone-fueled aggression is extreme. Hence the Darwinian theory of survival-of-the-fittest plays out. The dominant bull breeds with many cows over a period of weeks (as he attracts the harem by high pitched "bugling"), and is responsible for the births of many healthy calves in the late spring. Thus the gene pool is strengthened. But No. 6 took his paternal-pugilistic instincts a bit too seriously.

Something in his walnut-sized brain couldn't come to terms with certain aspects of life in the modern world. Nothing in millions of years of elk evolution had prepared No. 6 to understand the essence of a motor vehicle. Cars have been cruising through Yellowstone for almost a century, rolling past mostly unimpressed wildlife, especially the bison that habitually stand in the middle of roads serenely eyeing the traffic jams they initiate.
Although No. 6 wasn't the first elk on record ever to do it, he excelled at an activity that only enhanced his legend. During the rut he routinely terrified tourists by attacking their cars.

He stood by the road or in it near Mammoth and watched vehicles slow down and crawl by him. Sometimes visitors stopped for a photo op, occasionally annoying him. He seemed to zero in on SUVs, as if the bigger the automobile, the more of a threat it was to him and Yellowstone's future elk gene pool. No. 6 took them head on, his favorite approach was lowering his massive horns and charging straight at the front grill and headlights. He punctured radiators as if he knew that doing so would disable the vehicle.
He caused thousands of dollars worth of insurance claims to be filed. He attacked two men in separate incidents; knocking down one man, and causing another to need stitches. It got so bad in his prime that Yellowstone elk biologists tranquillized him twice -- in 2004 and 2005 -- and cropped his antlers to make them less dangerous. Bulls shed their antlers in early winter and grow new ones (initially in "velvet") the following summer, so for every rut they sport new horns. 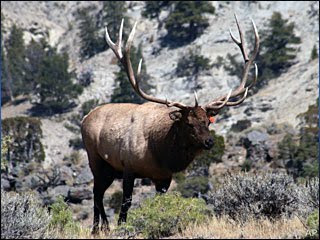 According to AP, No. 6's dressed carcass is in possession of the woman who owns the ranch near Gardiner, Montana, where he died. The Rocky Mountain Elk Foundation is offering the services of a taxidermist to do a head and shoulder mount, as it seeks permission to display No. 6's regal head at its headquarters in Missoula. So if all goes well, No.6 will attain the sort of elk immortality that would have suited his bull elk ego.

After the usual genetic head-butting among surviving bulls this fall, another dominant one has emerged in the Mammoth Hot Springs area. The Yellowstone wildlife pointyheads have identified him as the previously tagged No.10. As far as anyone knows, No. 10 -- though an impressive bull -- has never attacked a motor vehicle.

Bill Croke, formerly of Cody, Wyoming, is a writer in Salmon, Idaho.
Posted by jtf at 6:10 PM