The violence at Fort Hood, President Obama told mourners on Tuesday, was "incomprehensible." The "twisted logic that led to the tragedy," he reiterated, may be "too hard to comprehend." If the Bush administration suffered a systemic failure of imagination on homeland security, the Obama administration is suffering a willful failure of comprehension. 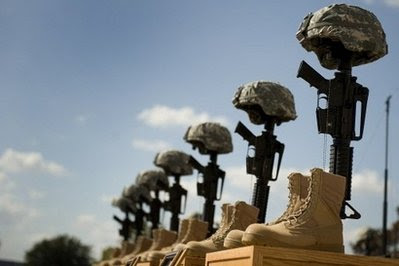 A fallen soldiers memorial at Fort Hood, Texas. US President Barack Obama has vowed justice as he eulogized those who were killed at the base and warned that even twisted faith could not explain such "craven" mass murder.(AFP/Jim Watson)

What exactly is so hard to comprehend? Fort Hood jihadist Maj. Nidal Hasan made his means, motives and inspiration all too clear for those willing to see and hear. In his 2007 slide presentation to fellow Army doctors on "The Koranic World View As It Relates to Muslims in the Military," Hasan spelled it out: "We love death more then (sic) you love life!"[Slideshow Gallery]

Hasan exposed the deadly tension between his adherence to Islam and his service in the U.S. military. Slide 11 stated: "It's getting harder and harder for Muslims in the service to morally justify being in a military that seems constantly engaged against fellow Muslims." Slide 12 cited Koranic sanctions for killing fellow believers. And Hasan made clear he wasn't alone among Muslim soldiers who "should not serve in any capacity that renders them at risk to hurting/killing believers unjustly."

Slide 13 ominously listed "adverse events" involving Muslim soldiers—including the fatal 2003 fragging attack on American soldiers in Kuwait by Sgt. Hasan Akbar (who was sentenced to death but remains alive while his case is on appeal); the desertion case of Lebanon-born Muslim Marine Wassef Ali Hassoun; and the espionage case of Muslim chaplain James Yee (the charges were dropped, but the case raised lingering security concerns about Muslim chaplains at Gitmo and elsewhere trained by terror-linked Saudi-subsidized institutes).

Hasan missed a few "adverse events" that have faded from public memory in our reflexive age of "Islam is peace" emotionalism-over-comprehension:

* John Muhammad, the Beltway jihadist put to death Tuesday night, was a member of the Army's 84th Engineering Company. As I've reported previously, Muhammad was suspected of throwing a thermite grenade into a tent housing 16 of his fellow soldiers as they slept before the ground-attack phase of Gulf War I in 1991. Muhammad was admitted to the Army despite being court-martialed while serving in the Louisiana National Guard for willfully disobeying orders, striking another noncommissioned officer, wrongfully taking property and being absent without leave.

Although Muhammad was led away in handcuffs and transferred to another company pending charges for the grenade attack, an indictment never materialized. Muhammad was honorably discharged from the Army in 1994. He later brainwashed young Lee Malvo in black nationalism and jihad—and the two carried out the three-week killing spree that left 10 dead in 2002 in the name of Allah.

* Muslim American soldier Hasan Abujihaad was convicted last year on espionage and material terrorism support charges after serving aboard the USS Benfold and sharing classified information with al-Qaida financiers, including movements of U.S. ships just six months after al-Qaida operatives had killed 17 Americans aboard the USS Cole in the port of Yemen.

* Jeffrey Leon Battle was a former Army reservist, convicted of conspiring to levy war against the United States and "enlisting in the Reserves to receive military training to use against America." He had planned to wage war against American soldiers in Afghanistan.

* Egyptian Ali A. Mohamed joined the U.S. Army while a resident alien despite being on a State Department terrorist watch list before securing his visa. An avowed Islamist, he taught classes on Muslim culture to U.S. Special Forces at Fort Bragg, N.C., and obtained classified military documents. He was granted U.S. citizenship over the objections of the CIA. Honorably discharged from the Army in 1989, Mohamed then hooked up with Osama bin Laden as an escort, trainer, bagman and messenger.
Mohamed used his U.S. passport to conduct surveillance at the U.S. Embassy in Nairobi. He later pleaded guilty to conspiring with bin Laden and admitted his role in the 1998 African embassy bombings that killed more than 200 people, including a dozen Americans.

Political correctness is a gangrenous infection. My generation has submitted to a toxic diet of multiculturalism, identity politics, anti-Americanism and entitlement. The problem festered under the Bush administration. Despite 9/11, government at all levels refused to screen out jihadi-apologizing influences in our military, at the FBI, in prisons and even fire departments. Despite the bloody consequences of open borders, the Bush Pentagon allowed illegal aliens to enter the military. The grievance lobby has plied the Muslim jihadist-as-victim narrative for nearly a decade now.

They prevail. In June, Muslim domestic terror suspect Abdul Hakim Mujahid Muhammad went on another shooting spree at an Arkansas recruiting station that left one serviceman dead. The Obama Justice Department response: to redouble its efforts to use "criminal and civil rights laws to protect Muslim Americans."

Next week, Attorney General Eric Holder will speak at a banquet featuring the Council on American-Islamic Relations, an unindicted co-conspirator in the terrorism financing case against the Holy Land Foundation for Relief and Development.