The rate at which Russian journalists are being murdered suggests they are getting close to something big. 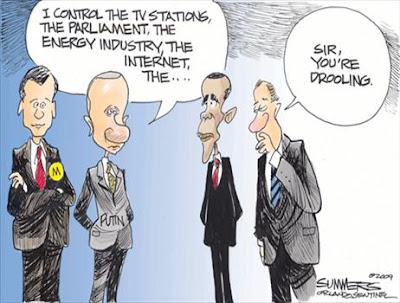 Natalia Estemirova, a top human rights activist, is the latest critic of the Russian government to have met an untimely demise. She was kidnapped and then killed in Ingushetia on July 15, the latest casualty in a long list of murders making Russia the third deadliest country for journalists.

As the Telegraph puts it, “there used to be three key people when it came to uncovering human rights abuses in Chechnya — the journalist Anna Politkovskaya, the lawyer Stanislav Markelov, and the human rights researcher Natalia Estemirova. In the space of less than three years, they’ve all now been murdered.”

This begs the question: what are they saying that the Russian government is trying to silence?

In 2007, Ivan Safronov “committed suicide” by jumping off a building after reporting on the failures of Russian military equipment. Politkovskaya was killed in an elevator after reporting on human rights abuses and warning of a return to dictatorship. A journalist named Magomed Yevloyev died in police custody after “resisting arrest” in August 2008. He was a critic of the pro-Russian leader of Ingushetia and reported on fraud in the election that brought President Medvedev to power.

The most high-profile assassination widely suspected to have been carried out by the Russian government is that of former high-level FSB officer Alexander Litvinenko, who served in a top position in the Directorate of Analysis and Suppression of Criminal Groups. He died on November 23, 2006, after being poisoned with a lethal dose of polonium-210. The Russians are refusing to extradite Andrey Lugovoy, a former KGB operative suspected in the murder, to the United Kingdom. Lugovoy is currently serving as a member of the Duma.

The lengths to which Russia went to assassinate Litvinenko should make the West ask what he was saying or doing that seemed to threatened Putin and the FSB so much. Like others, he alleged FSB involvement in the 1999 apartment bombings in Moscow that preceded the invasion of Chechnya, as well as other terrorist incidents on the soil of the former Soviet Union. He also accused Romano Prodi, a former prime minister of Italy, of having worked for the KGB. At the time of his poisoning, he was investigating the murder of Anna Politkovskaya, who he said had been killed on orders from Putin.

Litvinenko earlier made some surprising statements about a Russian connection to Ayman al-Zawahiri, the number two man of al-Qaeda, which most found too unbelievable to be true. His assassination gives us reason to give his credibility and claims a second look.

He said that Zawahiri was trained by the FSB in Dagestan for six months, after which he linked up with bin Laden’s forces in Afghanistan. Another former KGB agent, Col. Konstantin Preobrazhenskiy, says that Litvinenko was in charge of making sure Zawahiri’s visit was kept secret. The Russian FSB admits that they arrested Zawahiri and held him from December 1996 to May 1997. Litvinenko said that the training occurred in 1998, an error that can be attributed either to misspeaking or an inability to stick to one story. A fair analyst must note that Litvinenko could have constructed his story based on press accounts, assuming based on his experience that there was more to the arrest of Zawahiri by the Russians. At the same time, there are some anomalies in the conventional story.

J.R. Nyquist has made some interesting observations about Zawahiri’s detainment by the Russians, as detailed in a Wall Street Journal article. The story is that Zawahiri was held and given back all his belongings once released. The Russians, supposedly unaware of who he was, didn’t even go through his computer, a story that is hard to believe considering the nature of the Russian security services. At this time, Zawahiri was making contact with the Russians’ Chechen enemies and supporting terrorists in Bosnia. Either Russian intelligence was astoundingly incompetent and somehow didn’t know who he was — and didn’t look at his computer and find out — or they did know, supporting Litvinenko’s account.

Nyquist further notes that Zawahiri intentionally went to Dagestan, which was known to be controlled by the Russians, as opposed to Chechnya. After he was released, Zawahiri lied about going to Russia to his terrorist colleagues. The authors of the Journal article “admit that Zawahiri lied about his Russian adventure. He made up a story about being kidnapped by a criminal gang. Then Zawahiri ‘developed an ulcer,’” Nyquist notes.
Litvinenko said that his information came from top intelligence officials from Dagestan “who had directly worked with Ayman al-Zawahiri … [who] were called to Moscow and received high posts.”

Without more information, it’s difficult to know what this all means. Litvinenko could be lying or Zawahiri could have struck some sort of deal with the Russians, perhaps acting as an “agent of influence” or informant, although not necessarily under their control. It doesn’t mean Russia engineered 9/11 or directs Zawahiri’s actions, but if true, certainly means Russia is an expert chess player, willing to establish ties with those who are their enemies on the surface. Looking at Russia’s backing of Iran, this shouldn’t be surprising.

The international attention on Litvinenko’s assassination didn’t stop the Russians. Another high-ranking KGB defector named Oleg Gordievsky reported being poisoned on November 2, 2007, causing injuries which leave him partially paralyzed to this day. Although no link to the Russians has been found, the unsolved murder of Paul Joyal, a former security chief for the Senate Intelligence Committee, occurred shortly after he publicly accused Russia of killing Litvinenko.

The murder of Natalia Estemirova is an unfortunate reminder of the nature of the Russian government. Russia is allying with virtually every anti-American country on the planet and assassinating its critics. If Russia’s foreign and domestic policy is the same as that of the Soviet Union, then Russia should be treated as the Soviet Union.


Ryan Mauro is the founder of WorldThreats.com and the director of intelligence at the Asymmetrical Warfare and Intelligence Center (AWIC). He’s also the national security researcher for the Christian Action Network and a published author. He can be contacted at TDCAnalyst@aol.com.
Posted by jtf at 8:01 AM