Obama knows 'stupidly' when he doesn't see it

Encounter between cops and black professor suggests grievance-mongering will always be with us. 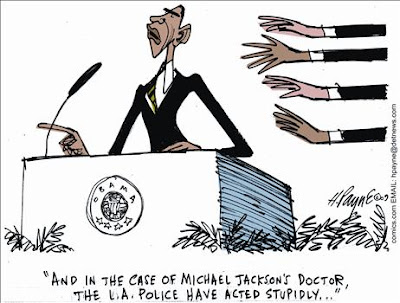 By common consent, the most memorable moment of Barack Obama's otherwise listless press conference on "health care" were his robust remarks on the "racist" incident involving professor Henry Louis Gates and the Cambridge police. The latter "acted stupidly," pronounced the chief of state. The president of the United States may be reluctant to condemn Ayatollah Khamenei or Hugo Chávez or that guy in Honduras without examining all the nuances and footnotes, but sometimes there are outrages so heinous that even the famously nuanced must step up to the plate and speak truth to power. And thank God the leader of the free world had the guts to stand up and speak truth to municipal police Sgt. James Crowley.

For everyone other than the president, what happened at professor Gates' house is not entirely clear. The Harvard prof returned home without his keys and, as Obama put it, "jimmied his way into the house." A neighbor, witnessing the "break-in," called the cops, and things, ah, escalated from there. Professor Gates is now saying that, if Sgt. Crowley publicly apologizes for his racism, the prof will graciously agree to "educate him about the history of racism in America." Which is a helluva deal. I mean, Ivy League parents remortgage their homes to pay Gates for the privilege of lecturing their kids, and here he is offering to hector it away to some no-name lunkhead for free.

As to the differences between the professor's and the cops' version of events, I confess I've been wary of taking Henry Louis Gates at his word ever since, almost two decades back, the literary scholar compared the lyrics of the rap group 2 Live Crew to those of the Bard of Avon. "It's like Shakespeare's 'My love is like a red, red rose,'" he declared, authoritatively, to a court in Fort Lauderdale.

As it happens, "My luv's like a red, red rose" was written by Robbie Burns, a couple of centuries after Shakespeare. Oh, well. 16th century English playwright, 18th century Scottish poet: What's the diff? Evidently being within the same quarter-millennium and right general patch of the North-East Atlantic is close enough for a professor of English and Afro-American Studies appearing as an expert witness in a court case. Certainly no journalist reporting Gates' testimony was boorish enough to point out the misattribution.

I hasten to add I have nothing against the great man. He's always struck me as one of those faintly absurd figures in which the American academy appears to specialize, but relatively harmless by overall standards. And I certainly sympathize with the general proposition that not all encounters with the constabulary go as agreeably as one might wish. Last year I had a minor interaction with a Vermont state trooper, and, 60 seconds into the conversation, he called me a "liar." I considered my options:

Option a): I could get hot under the collar, yell at him, get tasered into submission and possibly shot while "resisting arrest";

Option b): I could politely tell the trooper I object to his characterization, and then write a letter to the commander of his barracks the following morning suggesting that such language is not appropriate to routine encounters with members of the public and betrays a profoundly defective understanding of the relationship between law enforcement officials and the citizenry in civilized societies.

I chose the latter course, and received a letter back offering partial satisfaction and explaining that the trooper would be receiving "supervisory performance-related issue-counseling," which, with any luck, is even more ghastly than it sounds and hopefully is still ongoing.

Professor Gates chose option a), which is just plain stupid. For one thing, these days they have dash-cams and two-way radios and a GPS gizmo in the sharp end of the billy club, so an awful lot of this stuff winds up being preserved on tape, and, if you're the one a-hootin' an' a-hollerin', it's not going to help. In the Sixties, the great English satirist Peter Simple invented the Prejudometer, which simply by being pointed at any individual could calculate degrees of racism to the nearest prejudon, "the internationally recognized scientific unit of racial prejudice." Professor Gates seems to go around with his Prejudometer permanently cranked up to 11: When Sgt. Crowley announced through the glass-paneled front door that he was here to investigate a break-in, Gates opened it up and roared back: "Why? Because I'm a black man in America?"

Gates then told him, "I'll speak with your mama outside." Outside, Sgt. Crowley's mama failed to show. But among his colleagues were a black officer and a Hispanic officer. Which is an odd kind of posse for what the Rev. Al Sharpton calls, inevitably, "the highest example of racial profiling I have seen." But what of our post-racial president? After noting that "'Skip' Gates is a friend" of his, President Obama said that "there is a long history in this country of African-Americans and Latinos being stopped by law enforcement disproportionately." But, if they're being "disproportionately" stopped by African American and Latino cops, does that really fall under the category of systemic racism? Short of dispatching one of those Uighur Muslims from China recently liberated from Gitmo by Obama to frolic and gambol on the beaches of Bermuda, the assembled officers were a veritable rainbow coalition. The photograph of the arrest shows a bullet-headed black cop – Sgt. Leon Lashley, I believe – standing in front of the porch while behind him a handcuffed Gates yells accusations of racism. This is the pitiful state the Bull Connors of the 21st century are reduced to, forced to take along a squad recruited from the nearest Benetton ad when they go out to whup some uppity Negro boy.

As professor Gates jeered at the officers, "You don't know who you're messin' with." Did Sgt. Crowley have to arrest him? Probably not. Did he allow himself to be provoked by an obnoxious buffoon? Maybe. I dunno. I wasn't there. Neither was the president of the United States, or the governor of Massachusetts or the mayor of Cambridge. All of whom have declared themselves firmly on the side of the Ivy League bigshot. And all of whom, as it happens, are African American. A black president, a black governor and a black mayor all agree with a black Harvard professor that he was racially profiled by a white-Latino-black police team, headed by a cop who teaches courses in how to avoid racial profiling. The boundless elasticity of such endemic racism suggests that the "post-racial America" will be living with blowhard grievance-mongers like professor Gates unto the end of time.

In a fairly typical "he said/VIP said" incident, the VIP was the author of his own misfortune but, with characteristic arrogance, chose to ascribe it to systemic racism, Jim Crow, lynchings, the Klan, slavery, Jefferson impregnating Sally Hemmings, etc. And so it goes, now and forever. My advice to professor Gates for future incidents would be to establish his authority early. Quote Shakespeare, from his early days with Hallmark: