70 years on, John Ford’s Stagecoach is an enduring masterpiece 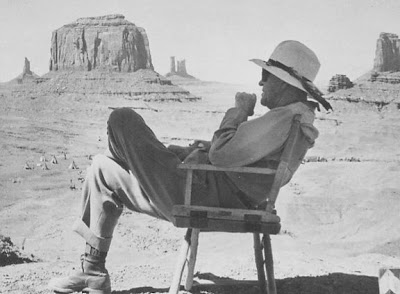 “Would I not then have betrayed my ideals, my thoughts, and my ancestors, if I hadn’t given men like that a well-deserved celebration in my films? If I hadn’t chosen to tell about poor, simple people and their hard struggle for existence?” — John Ford

The year 1939 is widely considered the finest in the history of cinema, with three films anchoring that golden year in our collective consciousness. The first two — Gone with the Wind and The Wizard of Oz — were lavish Technicolor spectaculars based on enormously popular books. The third had a much less illustrious pedigree. Adapted from a Collier’s short story with little more than a Poverty Row budget, it featured character actors, has-beens, and unknowns portraying such a motley assortment of drunks, crooks, whores, and gunslingers that the Depression-era ratings board almost rejected the script. Nevertheless, the film went on to become a critical and financial smash, in the process hurtling a sensitive young actor of rare gifts toward his destiny as the most legendary movie icon of them all: John Wayne.

The film, released 70 years ago today, was Stagecoach. Its director was a hardnosed, mercurial genius named John Ford, who, with six Oscars to his name (four for studio movies, two for wartime documentaries), remains the most honored filmmaker in Hollywood history. “When they ask me what I consider is my best picture,” Ford once growled, “I often say Stagecoach, if I answer at all, because it usually shuts them up without an argument.” In that he wasn’t alone. Orson Welles screened Stagecoach endlessly for inspiration while making Citizen Kane (1941), considering it “classically perfect.” Today’s film critics may cite Kane as the greatest movie of all time, but Welles himself always preferred “the old masters. By which I mean John Ford, John Ford, and John Ford.” Modern filmmakers also revere the film: The famous under-the-truck stunt in Raiders of the Lost Ark was pulled directly from Stagecoach’s even more harrowing under-the-coach scene. And the next time you’re laughing at Ralphie Parker shooting up imaginary bad guys in A Christmas Story, pay attention to the rousing music playing under the scene — that’s the main theme from Stagecoach, offered up in deft homage to one of the great Hollywood westerns. 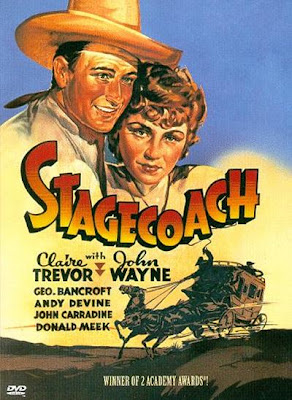 Stagecoach was Ford’s first film foray into Monument Valley, Utah, which he considered “the most complete, beautiful, and peaceful place on earth.” Under the ancient shadows of the valley’s sandstone mesas, the movie unfolds as wiry and muscular as a timber wolf, awash in visual poetry and what Ford called his “grace notes.” Wayne is off-screen for the first third of the film, before rocketing to instant stardom courtesy of one of the most memorable introductions in movie history, spinning his rifle and yelling “Hold it!” as the camera rushes toward his towering figure with such speed that he blurs out of focus. The film’s Apache marauders remain unseen, an almost supernatural danger lurking around every bend, until finally revealed late in the film by a sudden whipcrack pan that still strikes like a death knell seven decades later. Ford teases excruciatingly toward a final gunfight, and then, just as the bullets start flying, he audaciously cuts away to the heroine listening to the far-off gunfire, wondering who has lived and who has perished. Those magnificent cinematic moves, and many more, mark Stagecoach as a masterpiece.

Inevitably, every so often a Lilliputian pops out of the woodwork at this or that magazine or website, arguing that Ford was little more than a tyrannical, maudlin whitewasher of Manifest Destiny, an overwrought throwback to a less enlightened time. These critics resemble the pre-human apes of Kubrick’s 2001: A Space Odyssey, howling in vain at an artifact they cannot hope to understand. When a French admirer once asked Ford why he found “the theme of the family” so important, his reply was caustic: “You have a mother, don’t you?” On other occasions he was more wistful: “Is there anything more beautiful than a long shot of a man riding a horse well, or a horse racing free across a plain? Is there anything wrong with people loving such beauty?”

Those clean, stirring sentiments pulse through Stagecoach, which may be why Pope John Paul II’s Pontifical Council for Social Communications saw fit to include it on its 1995 list of “important films” of the last century. That august body perceived what lesser critics routinely miss — Ford’s unwavering humanity, fueled by a deep sense of Catholic piety. His best movies exude a love — for God and country, for tradition and culture, for family and life — as timeless and eternal as the spires and buttes of his beloved Monument Valley. They are as quintessentially American as the paintings of Norman Rockwell and Frederic Remington, the photographs of Mathew Brady and Ansel Adams, and the music of Aaron Copland and John Philip Sousa. 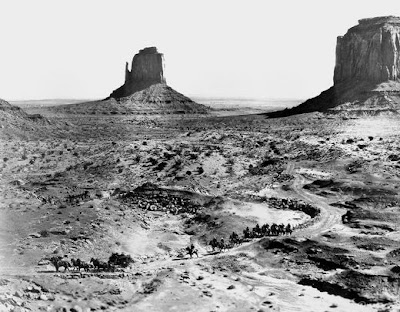 In 1964, as Ford’s career was winding to a close, the old warhorse remained steadfast in the face of a critical establishment that had declared his worldview passé: “As long as I can remember these pictures affectionately and with a little pride, as long as people like them and come to see them, as long as they make money, as long as they are good and honest and attractive and decent films, I’m not going to worry, I’m going to figure they’re wrong and we’re right.”

As Stagecoach celebrates its 70th birthday, John Ford’s potent brand of civilizational confidence remains as valuable as ever, defiantly crying “Hold it!” in the face of a modern, decadent Hollywood seemingly hell-bent on driving our heritage and values out of America’s popular culture.

— Leo Grin is a writer living in Los Angeles.
Posted by jtf at 8:32 AM