President Obama said he is strengthening government 'not because I believe in bigger government — I don't.' Chant: Yes you do.

By George F. Will
NEWSWEEK
From the magazine issue dated Mar 9, 2009
http://www.newsweek.com/ 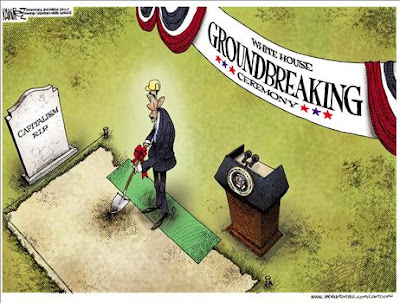 On April 12, 1933, the 40th day of his presidency, Franklin Roosevelt met with reporters and recounted to them "a story that was told to me the other day." The story of what FDR called "a certain little sweater factory in a little town"—"I won't even give you the location of it"—helps to explain why the Depression lingered through the 1930s, and why it is troubling to see the Obama administration auditioning for the role of the New Deal Redux.

The factory, which FDR said was the town's only industry, normally employed about 200 people who "had always been on exceedingly good terms" with the owners. However, "it was difficult to sell enough sweaters to keep them going because there were so many sweater factories" in the nation, all of which had had only about six weeks' worth of work in the past year. The town, FDR said, was "practically starving to death." So the people decided that they all could work if they reduced everyone's wages 33 percent. That would cut the cost of their sweaters and enable them to undersell competitors. FDR said the factory's sales agent went to New York and "in 24 hours" sold "enough sweaters to keep that factory going for six months, 24 hours a day, three shifts."

A heartwarming triumph of community solidarity over adversity? Not as seen through the pince-nez of Roosevelt, who pronounced it "bad business, in all ways." Granted, "they get a good deal of cash into the community." But "they undoubtedly, by taking these orders, put two other sweater factories completely out of business." So:

"That brings up the question as to whether we can work out some kind of plan that will distribute the volume of consumption in a given industry over the whole industry. Instead of trying to concentrate production to meet that consumption into the hands of a small portion of the industry, we want to spread it out … It might be called the regulation of production or, to put it better, the prevention of foolish overproduction."

Well. With the unemployment rate then at 24.9 percent, it was perverse to diagnose the nation's problem as overproduction. But government's confidence in markets and government's confidence in itself vary inversely. FDR's Washington was awash in confidence about government's ability to skillfully engineer a proper allocation of production within each industry. Supposedly the government's knack for economic planning would soon have the nation regulated back to prosperity. This would happen by, among other things, replacing competition with cartelization, the sweater cartel being, presumably, a paradigm.

Note the zero-sum and reactionary assumptions. If one sweater factory prospers, others must fail. And if x number of sweater factories exist, x number should forever exist. Sound familiar?

One of the last acts of the Bush administration was to give loans of $13.4 billion and $4 billion to General Motors and Chrysler, respectively, to save them from formally acknowledging their condition—bankruptcy. As the terms of their bailouts require, they recently submitted plans for regaining viability. The two plans say survival requires another $22 billion, which will tide the companies over until they need to be tided over again. GM's plan assumes that by 2014 Americans will be buying 18.3 million vehicles a year—500,000 more than the record set in 2000. It also assumes that GM, which has been losing market share almost constantly since the 1970s, will continue to do so for six years.

Chrysler's plan assumes 2014 sales of no more than 13 million. Cerberus, the private-equity company that owns 80 percent of Chrysler, has scores of billions to invest but instead is seeking more government money and a lifeline from Fiat, which will not put up any of its money until American taxpayers put up even more of theirs.

Bank of America now has a market capitalization less than half the value of the public money ($45 billion) it has received since October. Citigroup, too, is worth much less than has been pumped into it since then. American International Group's projected 2008 losses (more than $100 billion) are approaching 100 times its current market value. Deemed "too big to fail," it is failing in spite of $150 billion from the government.

The stimulus legislation, a.k.a. No Social Worker Left Behind, offers financial incentives for states to enlarge their welfare rolls. This looks like the beginning of a semi-stealthy repeal of the 1996 welfare reform. So it goes, as government, with a confidence disconnected from its current performance, toils to make more and more people more and more dependent on it.

In one wee particular, congressional Democrats want to shrink government. At the behest of the teachers' unions, the $410 billion omnibus spending bill dooms a $14 million (a rounding error on GM's bailout) scholarship program that enables 1,800 children, mostly low-income and minorities, to escape the District of Columbia's catastrophic public schools. But sinking this lifeboat for the poor serves liberalism's dependency agenda: No poor child left outside the government's education plantation.

Addressing Congress last week, the president said he is strengthening government "not because I believe in bigger government — I don't." Chant it, everybody: Yes you do.