A U.N. resolution seeks to criminalize opinions that differ with the Islamic faith.

The Muslim religion makes unusually large claims for itself. All religions do this, of course, in that they claim to know and to be able to interpret the wishes of a supreme being. But Islam affirms itself as the last and final revelation of God's word, the consummation of all the mere glimpses of the truth vouchsafed to all the foregoing faiths, available by way of the unimprovable, immaculate text of "the recitation," or Quran. 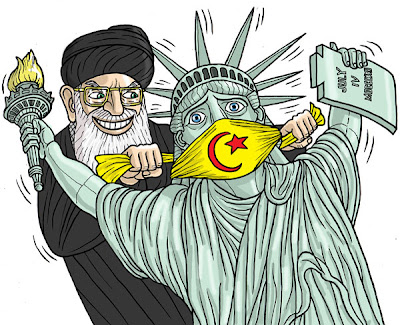 If there sometimes seems to be something implicitly absolutist or even totalitarian in such a claim, it may result not from a fundamentalist reading of the holy book but from the religion itself. And it is the so-called mainstream Muslims, grouped in the Organization of the Islamic Conference, who are now demanding through the agency of the United Nations that Islam not only be allowed to make absolutist claims but that it also be officially shielded from any criticism of itself.

Though it is written tongue-in-cheek in the language of human rights and of opposition to discrimination, the nonbinding U.N. Resolution 62/154, on "Combating defamation of religions," actually seeks to extend protection not to humans but to opinions and to ideas, granting only the latter immunity from being "offended." The preamble is jam-packed with hypocrisies that are hardly even laughable, as in this delicious paragraph, stating that the U.N. General Assembly:

Underlining the importance of increasing contacts at all levels in order to deepen dialogue and reinforce understanding among different cultures, religions, beliefs and civilizations, and welcoming in this regard the Declaration and Programme of Action adopted by the Ministerial Meeting on Human Rights and Cultural Diversity of the Movement of Non-Aligned Countries, held in Tehran on 3 and 4 September 2007.

Yes, I think we can see where we are going with that. (And I truly wish I had been able to attend that gathering and report more directly on its rich and varied and culturally diverse flavors, but I couldn't get a visa.) The stipulations that follow this turgid preamble are even more tendentious and become more so as the resolution unfolds. For example, Paragraph 5 "expresses its deep concern that Islam is frequently and wrongly associated with human rights violations and terrorism," while Paragraph 6 "[n]otes with deep concern the intensification of the campaign of defamation of religions and the ethnic and religious profiling of Muslim minorities in the aftermath of the tragic events of 11 September 2001."

You see how the trick is pulled? In the same weeks that this resolution comes up for its annual renewal at the United Nations, its chief sponsor-government (Pakistan) makes an agreement with the local Taliban to close girls' schools in the Swat Valley region (a mere 100 miles or so from the capital in Islamabad) and subject the inhabitants to Sharia law. This capitulation comes in direct response to a campaign of horrific violence and intimidation, including public beheadings. Yet the religion of those who carry out this campaign is not to be mentioned, lest it "associate" the faith with human rights violations or terrorism. In Paragraph 6, an obvious attempt is being made to confuse ethnicity with confessional allegiance. Indeed this insinuation (incidentally dismissing the faith-based criminality of 9/11 as merely "tragic") is in fact essential to the entire scheme. If religion and race can be run together, then the condemnations that racism axiomatically attracts can be surreptitiously extended to religion, too. This is clumsy, but it works: The useless and meaningless term Islamophobia, now widely used as a bludgeon of moral blackmail, is testimony to its success.

Just to be clear, a phobia is an irrational and unconquerable fear or dislike. However, some of us can explain with relative calm and lucidity why we think "faith" is the most overrated of the virtues. (Don't be calling us "phobic" unless you want us to start whining that we have been "offended.") And this whole picture would be very much less muddied and confused if the state of Pakistan, say, did not make the absurd and many-times discredited assertion that religion can be the basis of a nationality. It is such crude amalgamations—is a Saudi or Pakistani being "profiled" because of his religion or his ethnicity?—that are responsible for any overlap between religion and race. It might also help if the Muslim hadith did not prescribe the death penalty for anyone trying to abandon Islam—one could then be surer who was a sincere believer and who was not, or (as with the veil or the chador in the case of female adherents) who was a volunteer and who was being coerced by her family.

Rather than attempt to put its own house in order or to confront such other grave questions as the mass murder of Shiite Muslims by Sunni Muslims (and vice versa), or the desecration of Muslim holy sites by Muslim gangsters, or the discrimination against Ahmadi Muslims by other Muslims, the U.N. resolution seeks to extend the whole area of denial from its existing homeland in the Islamic world into the heartland of post-Enlightenment democracy where it is still individuals who have rights, not religions. See where the language of Paragraph 10 of the resolution is taking us. Having briefly offered lip service to the rights of free expression, it goes on to say that "the exercise of these rights carries with it special duties and responsibilities and may therefore be subject to limitations as are provided for by law and are necessary for respect of the rights or reputations of others, protection of national security or of public order, public health or morals and respect for religions and beliefs." The thought buried in this awful, wooden prose is as ugly as the language in which it is expressed: Watch what you say, because our declared intention is to criminalize opinions that differ with the one true faith. Let nobody say that they have not been warned.

Christopher Hitchens is a columnist for Vanity Fair and the Roger S. Mertz media fellow at the Hoover Institution in Stanford, Calif.

Email ThisBlogThis!Share to TwitterShare to FacebookShare to Pinterest
Labels: Christopher Hitchens, Islam and The West