Who Was the Real Che? 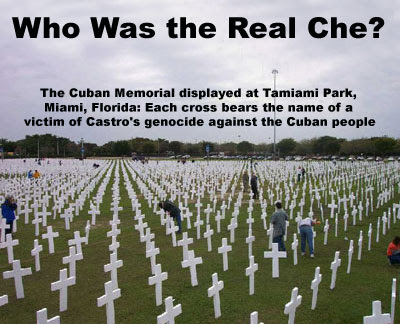 Hollywood is kicking off 2009 with a monumental deception: Steven Soderbergh’s four-hour Spanish-language epic Che, rendering a sadistic Marxist killer as, according to the New York Times, a “true revolutionary through the stations of his martyrdom.”[1] The word “stations” suggests the adoration of Christ in the Stations of the Cross. The movie’s protagonist, Benicio del Toro, does indeed compare “the Cuban Revolution hero Ernesto Guevara” with Jesus Christ.[2]

Soderbergh’s Che is a fiction once created by the KGB community, including my Romanian espionage service, the DIE, and at that time that placed me squarely in the picture. The real Che was an assassin who presided over communist firing squads and founded Cuba’s ghastly gulag system. He was also a coward who called upon others to fight to the death for the communist cause and sent to the scaffold hundreds who did not do that, yet he surrendered himself to the Bolivian army without a fight even though he was armed to the teeth. “Don’t kill me,” Che begged his captors. “I am worth more to you alive than dead.”[3] Soderbergh’s movie omitted this part—it would have demolished his Che.

I could write a book on how the terrorist Che was built into an inspiring leftist idol—like a beautiful monarch butterfly emerging from a disgusting caterpillar—and someday I may well do so. For now, here is a summary of how the KGB community created its fictional Che.

In the 1960s, the Soviet bloc’s popularity stood at an all-time low. The Soviets’ brutal suppression of the 1956 Hungarian uprising and their instigation of the 1962 Cuban missile crisis disgusted the world, and every bloc ruler tried to save face in his own way. Khrushchev replaced the “immutable” Marxist-Leninist theory of the world proletarian revolution with a policy of peaceful coexistence, and pretended to be an advocate for peace. Dubcek gambled on a “socialism with a human face” and Gomulka on “Let Poland be Poland.” Ceausescu announced his “independence” from Moscow and portrayed himself as a “maverick” among communist leaders.

The Castro brothers, who feared any liberalization, decided to just plaster a romantic revolutionary façade over their disastrous communism, which was starving the country. They chose Che as poster-boy, because he had been executed in Bolivia, at that time a U.S. ally, and could be portrayed as a martyr of American imperialism.

“Operation Che” was launched to the world by the book Revolution in the Revolution, a primer for communist guerrilla insurrection written by French terrorist Régis Debray, which praised Che to the skies. Debray dedicated his life to exporting Cuban-style revolution throughout Latin America, but in 1967 a Bolivian special forces unit trained by the U.S. captured him, along with Che’s entire guerrilla band.

Che was sentenced to death and executed for terrorism and mass murder. Debray was sentenced to 30 years in jail, but he was released after three years following the intervention of French philosopher Jean Paul Sartre, a communist romantically involved with the KGB, who was also the ideologue of the Baader-Meinhof terrorist band. Sartre proclaimed Guevara “the most complete human being of our times.”[4] In 1972 Debray returned to France, where he served as adviser for Latin America to French president François Mitterrand, and he dedicated the rest of his life to spreading hatred against the United States.

In 1970, the Castro brothers shifted Che’s sanctification into high gear. Alberto Korda, a Cuban intelligence officer working undercover as a photographer for the Cuban newspaper Revolución, produced a romanticized picture of Che. That now-famous Che, wearing long, curly locks of hair and a revolutionary beret with a star on it, and looking straight into the viewer’s eyes, is the logo advertising Soderbergh’s movie.

It is noteworthy that this picture of Che was introduced to the world by a KGB operative working undercover as a writer—I. Lavretsky, in a book entitled Ernesto Che Guevara, which was edited by the KGB.[5] The KGB entitled the picture “Guerrillero Heroico” and disseminated it throughout South America—Cuba’s area of influence. Italian millionaire publisher Giangiacomo Feltrinelli, another communist romantically involved with the KGB, flooded the rest of world with Che’s picture printed on posters and T-shirts. Feltrinelli became a terrorist himself, and he was killed in 1972 while planting a bomb outside Milan.

I first heard Che’s name in 1959 from General Aleksandr Sakharovsky, the former chief Soviet intelligence adviser to Romania, who afterwards directed Castro’s “revolution” and was rewarded by being promoted to head the almighty Soviet foreign intelligence organization, a position he held for fifteen years. He landed in Bucharest with his boss, Nikita Khrushchev, for consultations on West Berlin and “our Cuban Gayane.” Gayane was the overall code name of the operation for Sovietizing Eastern Europe.

At that time, the Soviet party bureaucracy believed that Fidel Castro was just an adventurer, and it was reluctant to endorse him. But Sakharovsky had been impressed by the devotion to communism of Fidel’s brother Raúl and of his lieutenant, Ernesto Guevara, and he made them the main protagonists in “our Cuban Gayane.” The two were brought black to Moscow to be indoctrinated and trained, and were given a KGB adviser.

Returned to the Sierra Maestra, Che proved to be a real, cold-blooded assassin in the mold of the KGB—which killed over 20 million people in the Soviet Union alone. “I fired a .32 caliber bullet into the right hemisphere of his brain that came out through his temple,” Che wrote in his diary, describing the execution of Eutimio Guerra, a “traitor of the Revolution” whom he shot in February 1957.[6] Guerra was the seventh person Che had killed. “To send men to the firing squad, judicial proof is not necessary,” he explained. “These procedures are archaic bourgeois detail. This is a revolution! And a revolution must become a cold killing machine motivated by pure hate.”[7]

On January 1st, 1959, the “Cuban Gayane” succeeded, and the KGB charged Che to cleanse the whole Cuba of “anti-revolutionaries.” Thousands were sent to “el paredón” (the wall) and shot. Javier Arzuaga, who was chaplain at La Cabaña prison in early 1959, wrote in his book, Cuba 1959: La Galeria de la Muerte, that he had witnessed “the criminal Che” ordering the execution of some two hundred innocent Cubans. “I pleaded many times with Che on behalf of prisoners. I remember especially the case of Ariel Lima, a young boy who was only 16 years old. Che did not budge. I became so traumatized that at the end of May 1959 I was ordered to leave the parish Casa Blanca, where La Cabaña was located. … I went to Mexico for treatment.”[8] 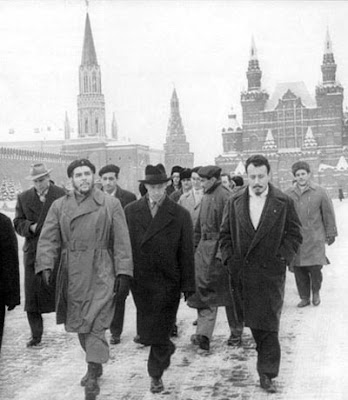 Che in Moscow in November 1964, just before he secretly left to fulfil his dream of spreading communist revolution to Bolivia.

According to Arzuaga, Che last words to him were: “When we take our masks off, we will be enemies.”[9] It is now time to take off Che’s smiling mask and reveal his true face. The Cuban Memorial displayed at Tamiami Park in Miami, Florida contains hundreds of crosses, each bearing the name of an identified victim of Raúl’s and Che’s communist terror.[10]

It is also time to stop the fifty-year-long lie, reinforced by Soderbergh’s movie, that the Castro brothers and their hangman Che were independent nationalists. In 1972 I attended a six-hour public speech in which Fidel preached the same lie. The next day I went ocean fishing with Raúl. The other guest on the fishing boat was a Soviet who introduced himself as Nikolay Sergeyevich. “That's Colonel Leonov,” Sergio del Valle, my Cuban counterpart, whispered into my ear. Earlier he had identified Leonov to me as Raúl’s and Che’s KGB adviser in the 1950s and 1960s. There, on that boat, it hit me more clearly than ever before or since that the KGB was holding the reins of the Castros’ revolutionary wagon. Ten years later, Nikolay Leonov was rewarded for his handling of Raúl and Che by being promoted general and deputy chairman of the whole KGB.

In the 1970s, the KGB was a state within the state. Today the KGB, rebaptized FSB, is the state in Russia, and Soderbergh’s Che is manna from heaven for its Latin American surrogates. A couple of months ago two Kremlin’s puppets, Venezuela’s Hugo Chavez and Bolivia’s Evo Morales, expelled on the same day the U.S. ambassadors to their countries. Thousands of people carrying the portrait of Soderbergh’s Che took to the streets calling for Russian military protection. Russian military ships are now back in Cuba—and newly in Venezuela—for the first time since the Cuban missile crisis.

“Deception works like cocaine,” Yury Andropov, the father of contemporary Russia’s era of deception, used to tell me when he was KGB chairman. Then he would explain. “If you sniff it once or twice, it may not change your life. If you use it day after day, though, it will make you into an addict, a different man.” Mao put it his own way: “A lie repeated a hundred times becomes the truth.” Soderbergh’s movie on Che is proving both correct.

[7] Mark Goldblath, “Revenge of Che: no amount of Hollywood puferry will change the fact that commies aen’t cool,” The Wall Street Journal, December 19, 2008.

- Lt. Gen. Pacepa is the highest-ranking intelligence official ever to have defected from the Soviet bloc. His newest book is Programmed to Kill: Lee Harvey Oswald, the Soviet KGB, and the Kennedy Assassination.