Springsteen has swapped anger for romance on his 24th album. 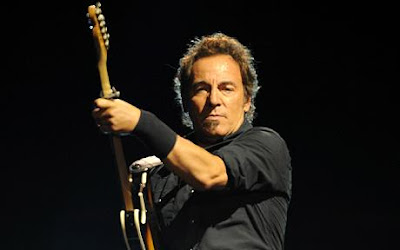 Working On A Dream


Springsteen 24th studio album follows 2007's Magic, a record underscored by fear, disgust and shame at the direction of his country under Bush. But now, as he plays to inaugurate a new president, the weight seems to have been lifted. The most political thing about Working On A Dream is that it is not political at all.

The Boss is in love, and doesn't care who knows it.

On "Queen of the Supermarket", Bruce Springsteen drives a shopping cart rather than a Cadillac, swooning over a check out girl with the wry tenderness of a Midwestern Morrissey. The E Street Band fill the supermarket aisles with a lush update of Roy Orbison-style operatic rock 'n roll.

At times the sentiments come close to Tin Pan Alley cheesiness. In "Kingdom of Days" he rhymes "I love you", "I do", and "blue", while also drawing attention to the moon and sun. Yet Springsteen is too substantial a songwriter to fall into cliché. The dark heart of love is glimpsed in the desperate epic "Life Itself", while even the simplest songs contain hard won wisdom.

On rare occasions when he strays from amour it is to celebrate hearty male friendship. The album's opener, "Outlaw Pete" is a sprawling folk saga, comic and touching, with a wild arrangement that hearkens back to the kind of music Springsteen made in the early 70s, before he really started to define himself.

The epic qualities of the E Street Band's sound is easily pastiched (indeed, others have built entire careers on it, from Bon Jovi to the Hold Steady) but Springsteen is moving forward by looking backwards. He has clearly been listening to '5th Dimension' era Byrds, The Beach Boys, West Coast Psychedelia and even pre-rock big band ballads. The arrangements are as likely to include swoonsome strings and choral singing as Clarence Clemons' trademark ripe sax.

This, I suspect, is Springsteen's idea of a pop album. But don't accuse the Boss of going soft. If anyone can make romance sound like manly business, Bruce can.
Posted by jtf at 11:54 PM