President Obama has demonstrated the rhetorical skills to use the bully pulpit, whether for good or ill. 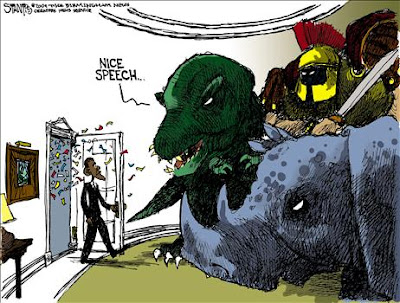 If making speeches is one of the tests of a president of the United States, then Barack Obama has passed his first test with flying colors. He has understood the varied constituencies, and the various hopes and fears he had to address. He said the kinds of things that all these constituencies wanted to hear.

As a speech, it was the best inaugural address since Ronald Reagan. This is not to judge the substantive merits or demerits of what he said. Anyone who judges any political speech by its substance—much less by what actions follow—is likely to be disappointed.

However, a political speech is more than just a theatrical performance of the moment. The ability to make a speech that connects with a wide range of people can be a political power in itself.

That power enabled Ronald Reagan to put through legislation that created “the Reagan revolution,” even though his party never controlled both houses of Congress while he was in the White House.

Nobody wanted the Gipper to go on the air and say that he was one of those in Congress who was obstructing the president’s program. In addition to the powers that automatically come with the office, the president has what Theodore Roosevelt called the “bully pulpit” from which to shape public opinion.

That bully pulpit was nowhere used more powerfully than by TR’s cousin, Franklin D. Roosevelt. During the famous “first hundred days” of FDR’s administration, so much far-reaching legislation was rushed through Congress that it is doubtful if most Congressmen ever read it all, much less had time to think about it.

President Obama now has that bully pulpit and has shown that he has the rhetorical skills to use it, whether for good or ill. The unprecedented throng that filled the vast reaches of the Washington Mall and lined the parade route from the capitol to the White House shows that he has the people behind him as he assumes office.

Secret service agents may have been concerned (or appalled) when the Obamas got out of their limousine and started walking in the middle of Pennsylvania Avenue. But anyone who might have tried to harm them would probably have been torn limb from limb by the crowd before anyone could have gotten there to arrest him.

It was an auspicious beginning. But presidencies are not measured by their beginnings. A long list could be made of presidents who came to the White House with high hopes and left with bitter disappointments.

Inevitably, much is being made of the fact that Barack Obama is the first black president of the United States.

He is indeed the first “African American” president, unlike the millions of other black Americans whose ancestors were here longer than millions of white Americans. By the time that there was a United States of America, most black Americans had never seen Africa and neither had their grandparents.

There is no group less eligible to be called hyphenated Americans. Nevertheless, Barack Obama is one of them—symbolically, at least—and race is part of the symbolism of this moment.

Those who doubted that a black man could be elected to the highest office in the land no longer have a leg to stand on. That can be a force for good, when young blacks can no longer be told that there is no point in their trying to get ahead in this society because “the man” is going to stop them.

In another sense, the Obama presidency may not be nearly as big a change in the country as some might think. Colin Powell could probably have been elected eight years ago. But you don’t know it can happen until it happens.

No doubt the race-hustling industry will continue, and no doubt their chief victims will be blacks, especially young blacks, who buy the paralyzing picture of victimhood and the counterproductive resentments which sap energies that could be better used to improve their own lives.

Now that we have the first black president of the United States, maybe we can move ahead to the time when we can forget about “the first” whatever to do what. There is too much serious work to do to spend more time on that.


— Thomas Sowell is a senior fellow at the Hoover Institution.
Posted by jtf at 8:20 AM