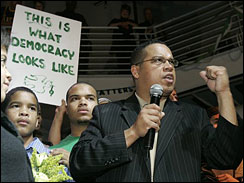 Today, Keith Ellison will be sworn in as United States Congressman from Minnesota’s 5th District, a prestigious title indeed. But prior to him getting to this position, he has carried much radical Islamist baggage – the kind of baggage that could make him (or anyone else) unworthy of such a title. Considering his actions with America’s live-in enemies, whilst running for office and even after being elected, we can most probably expect these dangerous associations of Ellison to continue well into his term.

During Ellison’s campaign for U.S. Congress, the issue of his relationship with the Nation of Islam (NOI) was brought up repeatedly. NOI, under the leadership of Louis Farrakhan, for decades, has been the perpetrator of countless verbal and written attacks against the Jewish community.

On May 26, 2006, Ellison sent a letter to the Executive Director of the local Jewish Community Relations Council (JCRC) acknowledging his participation in the hate group. [Full documentation of his involvement with NOI can be found at the blog Power Line.] In the letter, Ellison wrote, “I have long since distanced myself from and rejected the Nation of Islam due to its propagation of bigoted and anti-Semitic ideas and statements, as well as other issues…Like most people, I look back at my mistakes with regret. That said, my mistakes have not been futile because I have learned from them.”

However apologetic Ellison appeared to be, his words ring false, as he proceeded to cavort with those that not only exhibit the same kind of hatred as the NOI, but that have longstanding ties to terrorist groups as well. And he continues to do so.

Much of the money that was funneled into the coffers of Ellison’s campaign can be traced to the Council on American-Islamic Relations (CAIR), an organization that has ties to Hamas. In June of 1994, three leaders of the Islamic Association for Palestine (IAP), a group that was the brainchild of Hamas deputy Mousa Abu Marzook (Marzouk), incorporated CAIR. One of the leaders was CAIR’s Executive Director and, himself, a Hamas supporter, Nihad Awad.

Awad – who stated at a September 2000 rally, “[The Jews] have been saying ‘Next year in Jerusalem’; we say ‘Next year to all Palestine’” – personally gave thousands of dollars to Ellison’s campaign. The other head of CAIR, the group’s National Chairman, Parvez Ahmed, also gave large sums to Ellison. In addition, CAIR sponsored numerous fundraisers for Ellison – including secret fundraisers held outside the candidate’s state – where the group raised tens of thousands of dollars for him.

In October of 2000, then-candidate for U.S. Senate Hillary Clinton announced that she was returning $50,000 in campaign donations raised by the American Muslim Alliance (AMA), due to the group’s support for terrorism against the state of Israel. Not only did Ellison not give back CAIR’s money, but following his election, he spoke at the group’s November banquet (via video).

At the same time the CAIR banquet was taking place, Ellison found himself speaking at another organization’s event in Minnesota. That organization was the North American Imams Federation (NAIF). This was discovered shortly after six imams coming from the conference were removed from a U.S. Airways flight headed to Arizona. One of the imams, Omar Shahin, was formerly a representative for KindHearts, a “charity” that was shut down in February for raising millions of dollars for Hamas.

On the program for the conference, Ellison’s picture is found alongside two other individuals. One is Siraj Wahhaj, who is currently the imam of the At-Taqwa Mosque in Brooklyn, New York. Wahhaj's name was placed on the U.S. Attorney's list of potential co-conspirators to the 1993 bombing of the World Trade Center. Wahhaj, soon after, served as a witness for Sheikh Omar Abdel-Rahman, the spiritual leader of the attack, during the bombing trial.

The other individual in question is Mazen Mokhtar, currently the Youth Director for the New Jersey chapter of the Muslim American Society (MAS-New Jersey). Mokhtar, prior to 9/11, created a mirror website for one of the main sites raising funds and recruiting fighters for Al-Qaeda and the Taliban – “Jihad in Chechnya.” The site was also a portal to the official website of Hamas. In addition, Mokhtar has posted numerous statements on the web in support of Hamas and suicide bombings.

On Sunday, December 24, 2006, Ellison was the keynote speaker at yet another Islamist venue, the national convention of MAS and the Islamic Circle of North America (ICNA), held in Dearborn, Michigan. Both MAS and ICNA have their roots in the violent Muslim Brotherhood of Egypt and Pakistan, respectively. Mokhtar was also featured at this event, along with a former official from the IAP, Raeed Tayeh. Tayeh, in November of 2001, was fired from his job as a speechwriter for then-United States Representative Cynthia McKinney for referring to the United States Congress as “Israeli-occupied territory.”

One cannot help but question Keith Ellison’s motives for participating in events such as these. In front of crowds, he speaks of tolerance and justice. On his website, he discusses bringing peace to the masses. Yet his actions say something entirely different.

Keith Ellison spent 10 years of his life associating with the Nation of Islam. Since running for office, it seems, he has traded his loyalties to that group for organizations and individuals that are at least equally dangerous. When Congressman Ellison places his hand, today, on the Quran, to which people is he swearing an oath to protect? Is it the American public – many of which went blindly into the voting booths to choose him – or is it his friends, our enemies?

Joe Kaufman is the Chairman of Americans Against Hate, the founder of CAIR Watch, and the spokesman for Terror-Free Oil Initiative.
Posted by jtf at 8:33 AM