Jeff Jacoby: Castro's true legacy is a trail of blood 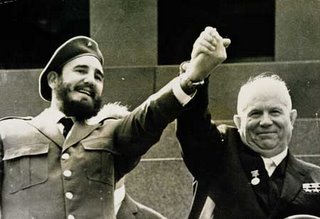 It was on New Year's Day in 1959 that Fidel Castro's guerrillas toppled Fulgencio Batista, and a week later that Castro entered Havana and launched what has become the world's longest-lived dictatorship. This week thus marks the 48th anniversary of Castro's revolution -- and the last one he will celebrate, if the persistent rumors that he is dying prove to be true. Which makes this a good time to ask: What will be said about Castro after his death?

For decades, journalists and celebrities have showered Cuba's despot with praise, extolling his virtues so extravagantly at times that if sycophancy were an Olympic sport, they would have walked off with the gold. Norman Mailer, for example, proclaimed him "the first and greatest hero to appear in the world since the Second World War." Oliver Stone has called him "one of the earth's wisest people, one of the people we should consult."

The cheerleaders have been just as enthusiastic in describing Castro's record in Cuba. "A beacon of success for much of Latin America and the Third World," gushed Giselle Fernandez of CBS. "For Castro," Barbara Walters declared, "freedom starts with education. And if literacy alone were the yardstick, Cuba would rank as one of the freest nations on earth." Covering Cuba's one-party election in 1998, CNN's Lucia Newman grandly described "a system President Castro boasts is the most democratic and cleanest in the world."

During a 1995 visit to New York, writes Humberto Fontova in Fidel: Hollywood’s Favorite Tyrant, a blistering 2005 exposé of Castro and his regime, Cuba's maximum leader "plunged into Manhattan's social swirl, hobnobbing with dozens of glitterati, pundits, and power brokers." From the invitation to dine at the Rockefeller family's Westchester County estate to being literally kissed and hugged by Diane Sawyer, Castro was drenched with flattery and adoration at every turn.

When Castro dies, some of his obituarists will no doubt continue this pattern of fawning hero-worship. But others, more concerned with accuracy than with apologetics, will squarely face the facts of Castro's reign. Facts such as these:

The United States welcomed Castro's ouster of Batista and was one of the first nations to recognize the new government in 1959. Many Americans supported Castro, including former president Harry Truman. "He seems to want to do the right thing for the Cuban people," Truman said, "and we ought to extend our sympathy and help him to do what is right for them."
It was not until January 1961 that President Eisenhower -- reacting to what he called "a long series of harassments, baseless accusations, and vilification" -- broke diplomatic ties with Havana. By that point Castro had nationalized all US businesses in Cuba and confiscated American properties worth nearly $2 billion.

Well before he came to power, Castro regarded the United States as an enemy. In a 1957 letter -- displayed in Havana’s Museo de la Revolucion, Fontova observes -- the future ruler wrote to a friend: "War against the United States is my true destiny. When this war's over, I'll start that much bigger and wider war."

Freedom House gives Cuba its lowest possible rating for civil liberties and political rights, placing it with Burma, North Korea, and Sudan as one of the world's most repressive regimes. Hundreds of political prisoners are behind bars in Cuba today. Among them, writes Carlos Alberto Montaner in the current issue of Foreign Policy, are "48 young people [imprisoned] for collecting signatures for a referendum, 23 journalists for writing articles about the regime, and 18 librarians for loaning forbidden books." Political prisoners can be beaten, starved, denied medical care, locked in solitary confinement, and forced into slave labor. Castro long ago eliminated freedom of religion, due process of law, and the right to leave the country.

He also wiped out Cuba’s once-flourishing free press. According to the Committee to Protect Journalists, Cuba is one of the world’s leading jailers of journalists, second only to China in the number of reporters behind bars.

While Cubans grew progressively poorer under communism, Castro exploited them to become one of the world's richest people. Foreign companies doing business in Cuba must pay a significant sum for each worker they hire -- but most of the money goes to Castro's regime, while the workers receive only a pittance. Castro also controls Cuba's state-owned companies, whose profits account for much of his wealth. Castro insists that his personal net worth is zero, but in 2006 Forbes magazine estimates the amount to be $900 million.

* Castro shed far more blood than the dictator he replaced.

According to the Cuba Archive, which is meticulously documenting the deaths of each person killed by Cuba's rulers since 1952, Batista was responsible for killing approximately 3,000 people. Castro's toll has been far higher. So far the archive has documented more than 8,000 specific victims of the Castro regime -- including 5,775 firing squad executions, 1,231 extrajudicial assassinations, and 984 deaths in prison. When fully documented, the body count is expected to reach 17,000 -- not counting the tens of thousands of Cubans who lost their lives at sea while fleeing Castro's Caribbean nightmare.

"Condemn me, it doesn't matter," Castro said long ago. "History will absolve me." But Castro's ultimate day of judgment draws near, and history is not likely to be so kind.

Jeff Jacoby is an Op-Ed writer for the Boston Globe, a radio political commentator, and a contributing columnist for Townhall.com.
Posted by jtf at 9:57 AM