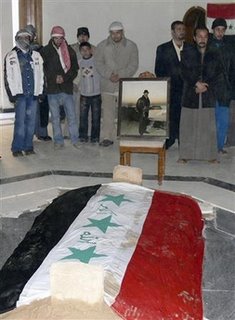 [This piece was written before Saddam Hussein's execution. - jtf]

Many data, historical and analytical, are being thrust at us, following the pronouncement of the death sentence on Saddam Hussein. What one might loosely call "the prosecution," anxious to defend this mite of justice handed down by the Iraqi court, reminds the world that it is incorrect to assume that the execution of Saddam can measure up to what Saddam did. Remember, we are told, the court ruled on only a single barbarity, namely the Dujail massacre.

That involved murdering about 150 Shiites. They were being punished for conspiring against Saddam. Most of them were, simply, shot. But not all. Some, we learned, were inserted into meat grinders. If the trial revealed what were Saddam's motives in this alternative means of execution, word of what they were has not got out. Most would think it naive even to ask. The idea — alternative means of execution — wasn't a scientific experiment: Execution by bullet, or by giant blades that tear bone and flesh apart — which is better? The idea, manifestly, was to exhibit the lengths to which Saddam was routinely prepared to go in order to discourage dissent.

We are reminded that there is no mathematically satisfying way to measure the life of Saddam up against all the lives he destroyed. As well suggest that an execution of Hitler or Stalin or Mao could ever have balanced the scales on what they had done. Capital punishment is exacted, in modern law, as punishment for taking a single life. Taking hundreds, thousands, millions of lives mocks the very idea of executable justice. But the symbol of Saddam on the gallows is a symbol of justice pursued, even if plenary satisfaction is not possible.

The date is not set, but we are advised that under Iraqi law, execution is required to take place not more than 30 days after the affirmation of the sentence. And so we pause to anticipate the cries against capital punishment. Thoughtful citizens, especially those dutifully inclined to listen to the teachings of the Christian church, acknowledge that to endorse the sentence on Saddam is to endorse the capital punishment decried by a very large school of ethicists and, indeed, by the pope himself.

Let's go ahead and acknowledge that taking a life, even under civil sanction, asserts an authority over human life not lightly assumed. In the arguments of the abolitionists — and that includes most Western governments and 110 percent of the world's professional ethicists — this is never justifiably done in cold blood.

A formal philosophical-moral manifesto, seeking to annul the authority of the Iraqi court, has not yet been enunciated, but it will be. So far we have only the meanderings of Ramsey Clark, routinely dismissed. In plain fact, only the U.S. Army could exercise the power to freeze Saddam's trap door, and this isn't going to happen.

What is going to happen is an outcry against capital punishment, and we are obliged to listen to what will be said and to weigh the arguments, even if we have wrestled with the dilemma before. But we are entitled, also, to satisfaction from what is about to happen.

For all that the Arab world seems crowded with young men who are prepared to blow themselves up provided they can simultaneously blow up other people, the indications are pretty clear that Saddam Hussein himself has no appetite to go to the gallows. His aggressive, contemptuous conduct during the trial, the scorn he has shown for the very idea of a tribunal that presumes to question his sacrosanct judgments, balances ironically with his claims to innocence. I didn't do it, and if I did I was entitled to do it. Saddam Hussein does not want to die on the gallows any more than the Nuremberg gang did.

But this is the point at which we are entitled to a measure of satisfaction precisely over what Saddam is going to experience. Even if it is prideful to take his life, it is something other than sinful to take satisfaction — pleasure, even — at its forfeit.

It was rumored, in 1946, that the hangman in Nuremberg adjusted the nooses of some of the condemned to magnify the pain of suffocation. Such sadism was not called for then and is not called for now. But if fornication is wrong, there is no denying that it can bring pleasure. The death of Saddam Hussein at rope's end brings a pleasure that is undeniable, and absolutely chaste in its provenance.
Posted by jtf at 7:41 PM