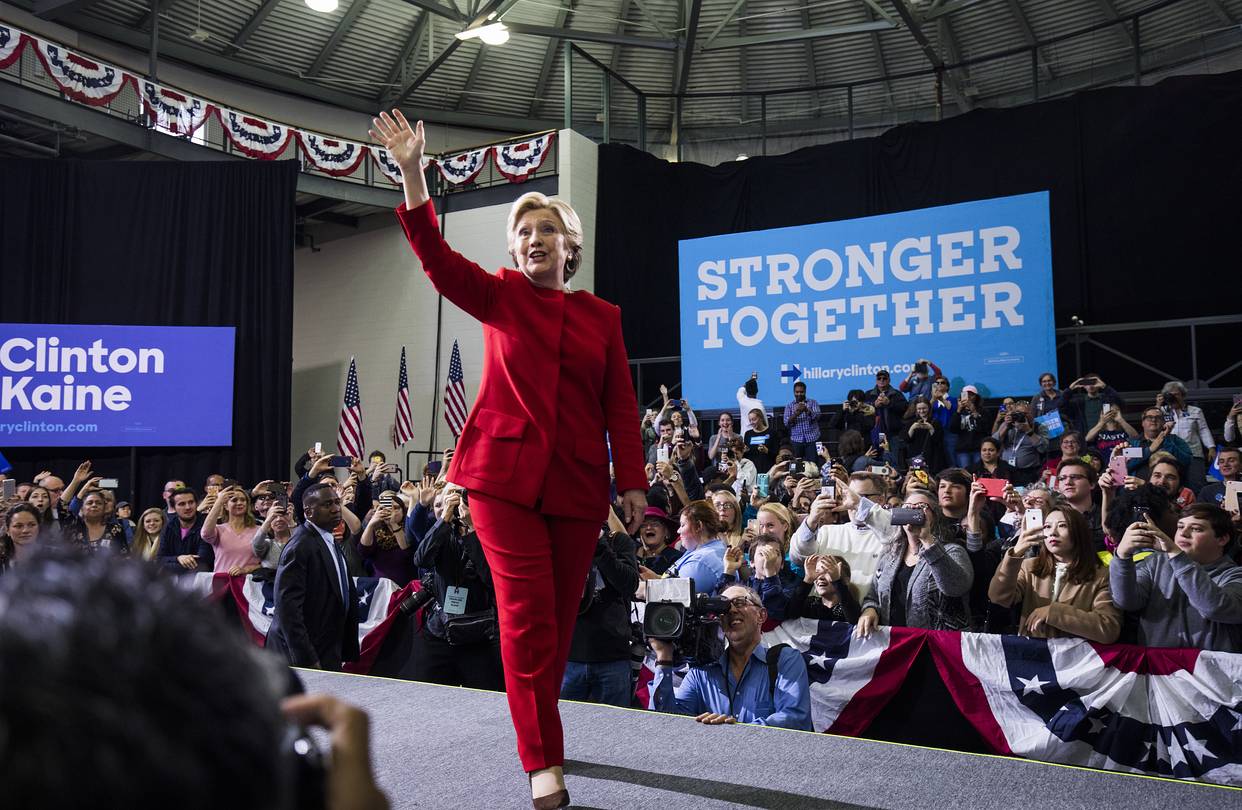 For more than two years, the campaign, presidential transition, and official government administration of Donald Trump operated under a cloud of suspicion that they had engaged in a treasonous conspiracy to steal the 2016 election from former secretary of state Hillary Clinton. Trump and his top associates were accused of collusion and of conspiring with the Russians to subvert American democracy.
The former director of the Central Intelligence Agency publicly declared Trump to be guilty of treason, an offense punishable by death. The former head of the Federal Bureau of Investigation, the country’s premier law enforcement agency, intimated that the president had illegally obstructed justice.
In the end, none of it was true. After a nearly two-year-long investigation that issued 2,800 subpoenas, interviewed 500 witnesses, and used nearly 300 wiretaps and pen registers, Special Counsel Robert Mueller concluded that there was no evidence of collusion by Trump or his associates.
But that doesn’t mean 2016 was free of Russian collusion. To the contrary, there is clear evidence that a 2016 presidential campaign willfully and deliberately colluded with Russians in a bid to interfere with American elections. It wasn’t Trump’s campaign that colluded with shady Russia oligarchs and sketchy Russian sources to subvert American democracy: it was Hillary Clinton’s.
In fact, the entire Russian collusion conspiracy that held the nation hostage for more than two years was the brainchild of a foreign national who was working on behalf of a sanctioned Russian oligarch with close ties to the Kremlin. At the same time he was telling the media that Trump was the undisclosed agent of Russia, that foreign national was lobbying the U.S. Department of Justice (DOJ) to ease up on his Russian benefactor.
As it turns out, the DOJ official being lobbied was the spouse of one of that foreign national’s co-workers at the firm that hired the two of them to foment Russian hysteria on behalf of the Clinton campaign. And in a twist almost too absurd for even the most bizarre Franz Kafka novel, that firm was itself working on behalf of a Russian billionaire’s corporation that had been charged by U.S. federal prosecutors with illegally evading U.S. sanctions.

That foreign spook-turned-international political provocateur was none other than Christopher Steele, the author of the infamous and utterly debunked Steele dossier that ignited a domestic firestorm after it was briefed to president-elect Trump in January 2016 and subsequently published in full by BuzzFeed. His Russian benefactor at the time was Oleg Deripaska. His co-conspirator at DOJ was Bruce Ohr, whose wife Nellie Ohr received more than $40,000 for her work for Fusion GPS, the Clinton campaign-sponsored opposition research firm that just so happened to be working on behalf of Prevezon, a company owned by Russian billionaire Denis Katsyv, during the 2016 campaign.
The curious Clinton campaign collusion connections don’t end there. Somehow it gets worse. The Russian attorney for Prevezon, which later settled charges of laundering money and violating sanctions in exchange for $5.9 million in fines paid to the DOJ, was none other than Natalia Veselnitskaya, who arranged the Trump Tower meetingwith Donald Trump Jr. and Jared Kushner, a meeting that was alleged to be proof-positive that the Trump campaign had illegally colluded with the Russians during the 2016 campaign.
Unlike the fabulist musings of Steele, who by his own admission colluded with Kremlin officials as he prepared and disseminated his anti-Trump dossier, the Clinton-Russian connections are not the delusions of a deranged conspiracy theorist. They are documented and verified facts which for some reason escaped the attention of the scores of journalists and investigators who purported to root out any and all instances of foreign collusion during the 2016 election.

How It All Went Down

Fusion GPS was hired in April 2016 by the Clinton campaign’s law firm to do opposition research against the Trump campaign after it became clear that Trump would be the Republican presidential nominee. The campaign expenditures to Fusion GPS were never disclosed in campaign finance reports.
At the same time, it was also working on behalf of Prevezon, a company owned by Kremlin-connected Russian oligarch Denis Katsyv, in the company’s battle with U.S. prosecutors over Magnitsky Act sanctions against the company. Shortly after Fusion was hired to work for the Clinton campaign and the Democratic National Committee, it retained the services of Steele and directed him to dig up dirt on connections between the Trump campaign and Russia. The series of reports and memoranda prepared and peddled by Steele collectively became known to the public as the so-called Steele dossier.
Nellie Ohr, wife of top DOJ official Bruce Ohr, was also hired by Fusion GPS to assist with its Russia-related anti-Trump research. And it was Ohr who later became the secret conduit between Steele and the FBI after Steele’s status as a confidential human source for the FBI was terminated when the bureau learned he had lied about his contacts with the news media. Andrew McCabe, Peter Strzok, Bruce Ohr, Nellie Ohr
Natasha Veselnitskaya, the Russian attorney for Prevezon with whom Fusion GPS founder Glenn Simpson worked directly, just so happened to be responsible for setting up the June 2016 Trump Tower meeting that was touted as evidence that the Trump campaign was going out of its way to collude with corrupt Russian officials in order to take down Hillary Clinton. Veselnitskaya met with Simpson both before and after the meeting, although both claim that they never discussed that meeting, only the Prevezon matter.
However, information Veselnitskaya provided during the Trump Tower meeting — the “dirt” which was promised to the president’s oldest son — was actually produced by Fusion GPS, raising questions about the claims that Simpson and Veselnitskaya never discussed the Trump Tower meeting with each other. Veselnitskaya was indicted by federal authorities early this year for obstructing justice during the course of the same Prevezon litigation that she and Fusion GPS worked on together.

In addition to funneling unverified allegations from his dossier to the FBI and the media, Steele also repeatedly intervened with Ohr, the DOJ official, on behalf of Oleg Deripaska. Transcripts of Ohr’s congressional testimony show that Steele referred to Deripaska as “our favorite business tycoon” and tried several times to broker a meeting between Deripaska and DOJ.

Although Deripaska was prohibited from traveling to the United States, he used diplomatic cover to enter the United States at least twice in 2016, once in June and again in September. Federal agents interviewed him in New York during his September visit,according to Deripaska’s attorney andregistered foreign agent Adam Waldman.

The relationship between Steele and Deripaska’s team continued well past the election into 2017, when Waldman offered himself to Sen. Mark Warner (D-Va.) as the middleman between Steele and the Senate Select Committee on Intelligence. Waldman’s offer to Warner to broker access to Steele came to light when secret, encrypted text messages between Waldman and Warner were published by Fox News in February 2018.

Waldman also previously registered as a foreign agent for former Russian minister Sergey Lavrov. Federal records show that his formal lobbying on behalf of the Russian politician ended on May 31, 2017. Separate federal filings required by the Foreign Agents Registration Act show that Waldman collected nearly $1.1 million from Deripaska in 2016 and 2017.

It is beyond dispute that the Clinton campaign and the DNC funded an opposition research firm that was working on behalf of a company owned by a Kremlin-connected Russian oligarch. To dig up dirt on alleged connections between the Trump campaign and Russia, that firm then hired a foreign national who was working on behalf of another Russian oligarch. At the same time he was providing his unsubstantiated allegations of Trump campaign malfeasance to federal authorities, that same foreign national was trying to get those same federal officials to allow that sanctioned oligarch entry to the United States.

Meanwhile, the Russian attorney whose presence at a Trump Tower meeting with top Trump campaign officials was taken as proof-positive of collusion was also secretly meeting with the founder of the firm used by the Clinton campaign and DNC to allege that it was the Trump campaign that was improperly communicating with the Russians. And if that weren’t enough, the most salacious allegations in the infamous dossier that was a primary basis for secret federal surveillance of a political campaign were sourced to various anonymous officials with the Kremlin.

As the Mueller investigation reportedly concluded, though, there was no illegal conspiracy within the Trump campaign to collude with the Russians to subvert our democracy. There was collusion, alright, but it was committed by the presidential campaign of Hillary Clinton.

Sean Davis is the co-founder of The Federalist.