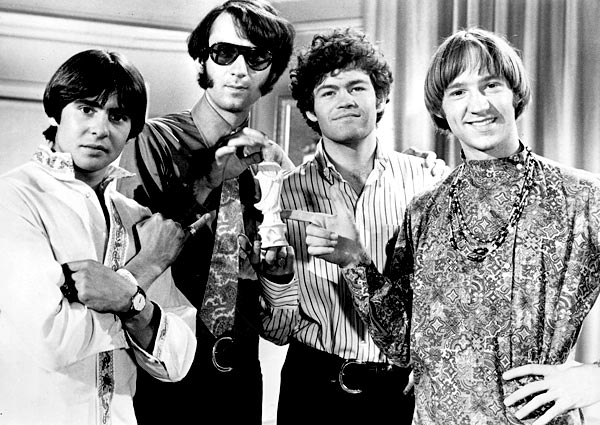 Peter Tork had the funniest line at the Monkees’ 50th Anniversary Tour show, three years ago: “If you’ve been following us from the beginning, just remember one thing. Any one thing.” If you were lucky enough to see the Monkees live over the past decade, you know being in the room with Peter Tork was one of the planet’s happiest places to be. He was the funniest Monkee, their Ringo, their truest hippie, always happy to pitch in with a banjo solo or a bit of his dazed flower-child wisdom. This man knew how to rock a black-velvet silver-button tunic. That’s why fans around the world are grieving his death Thursday at 77. As he promised all those years ago in “For Pete’s Sake,” he made the world shine.
Before the Monkees, Tork was a folkie on the Greenwich Village coffeehouse circuit, scrounging and passing the hat for tips. When he auditioned for the TV show in 1965, he played the clown, a summer-babe blonde with a simple mind but a heart of gold, on guitar with his bandmates Micky Dolenz, Mike Nesmith and the late Davy Jones. The Monkees were famously assembled by Hollywood producers for kiddie TV — Tork and Nesmith were the musicians, Dolenz and Jones were the actors. But their music turned out to be far more lasting and influential than the show. The Monkees ran just two seasons, but “Pleasant Valley Sunday” and “Last Train to Clarksville” and “Sunny Girlfriend” and “Star Collector” are forever.
Tork was a crucial reason why. He co-wrote the theme song “For Pete’s Sake,” turning his peace-love-and-understanding plea into a pop classic. He was always their hippie conscience, adding his plucky vocals to “Shades of Grey” and “Your Auntie Grizelda.” “With all due modesty since I had little to do with it, the Monkees’ songbook is one of the better songbooks in pop history,” he told Rolling Stone’s Andy Greene in 2011, correctly. “Certainly in the top five in terms of breadth and depth.”
Tork got hired on the advice of Stephen Stills, who remembered him from back in the old folkie days. “Stephen was the guy who looked like me on Greenwich Village streets,” Tork said in Eric Lefcowitz’s band history Monkee Business. “That’s how I recognized him — I walked up to him and said, ‘You’re the guy that looks like me.’ And he said, ‘Oh, you’re the guy I’m supposed to look like.’” They sounded alike, too, but Tork got the Monkees gig; Stills went on to Buffalo Springfield and CSNY. In the Seventies, they were housemates in Laurel Canyon’s most infamously decadent hippie pad, an experience they both miraculously survived.
At first, the Monkees were dismissed as phonies. Tork, who paid his dues in the Village scene, took the backlash a lot harder than the others. But the band took control of their music on the gem Headquarters, famously the second-biggest album of 1967, behind the Beatles’ Sgt. Pepper. As Lillian Roxon wrote presciently in 1969, in her pioneering Rock Encyclopedia, “It was the music people who first discovered that the Monkees were good guys. Everyone else followed. By 1968 it was distinctly not done to put down the Monkees.”
He wrote “Can You Dig It?” on the TV set, in his dressing room, for the band’s 1968 movie Head. As he told Greene in 2016, “The basic lyrics came to me and these changes I had stored in the back of my brain spring forth and dictated that kind of vaguely Spanish/North African harmonic sense. I was writing about the great unknown source of all.” The Ben Stiller Show did a great 1992 parody called “The Grungies,” with Ben Stiller as a Chris Cornell figure and Bob Odenkirk as Mike Nesmith; the bandmate called “Tork” looked exactly like Kurt Cobain in the “Smells Like Teen Spirit” video and blew the band’s advance on $50,000 worth of Chinese food. In later years, as the band toured in various incarnations, the Tork Factor was always key. (Micky: “I dressed up in my hippie regalia.” Peter: “I almost drowned in one of those!”)
The Monkees were always a fractious collection of personalities. As Tork diplomatically put it in Rolling Stone, “If you stop to think about it, there are six pairs in a quartet.” A 2001 tour fell apart; Tork took the blame, admitting, “I had a meltdown and I messed up.” He bowed out of the current Nesmith/Dolenz tour, saying it was to concentrate on his Lead Belly tribute album Relax Your Mind, though there were already worries about his health.
But he lived long enough for the 2016 reunion Good Times!, easily the best Monkees album since the Sixties. Producer Adam Schlesinger was the first actual Monkees fan ever to make a Monkees album. At the 50th-anniversary show in NYC, Papa Nez joined Dolenz and Tork via Skype to sing “Papa Gene’s Blues.” “Me and Magadelena” was a career-capping ballad written by another fan, Death Cab for Cutie’s Ben Gibbard, with Nesmith, Dolenz and Tork all rising to the occasion. Some of us Monkees fans spent years waiting for that song. “I’ve never heard Michael be so emotionally available as a singer before,” Tork told Rolling Stone. “It’s astounding to be in the middle of it. I look around and go, ‘What is this?'”
My favorite Monkees song is on the Head soundtrack, “As We Go Along,” a Carole King ballad with guitar glaze from Ry Cooder and Neil Young. In the movie, it comes right after a lonely moment for Tork; he sits sad in the corner, covered in confetti, frowning in his dashiki and love beads. Then, as the song begins, he’s in a dream sequence where he’s walking in the snowy mountains. It’s a breathtakingly beautiful moment — this blonde hippie boy in this wide open space, looking around at it all with wonder. It’s how I will all remember Peter Tork.
Posted by jtf at 10:03 AM