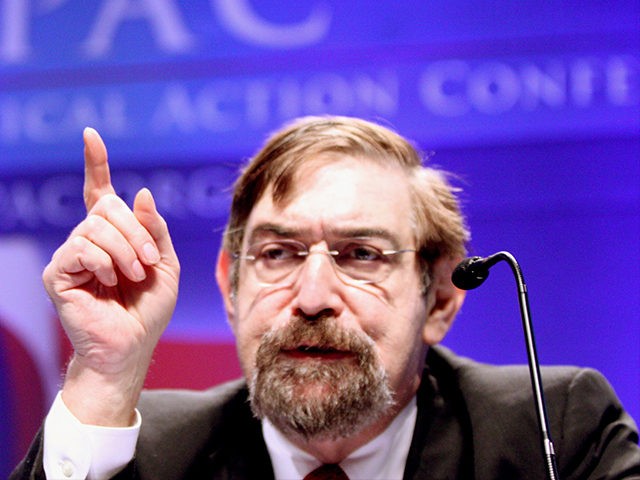 Pollster and political analyst Pat Caddell died from a stroke on Saturday at the age of 68.
Few people had more to do with Donald Trump’s amazing victory in 2016. The Washington Post concluded that Caddell “first wrote the instruction manual” for Trump when, entirely on his own, he conducted polls showing that the public “was ripe for an outsider candidate to take the White House.” No one I know in public life better grasped the angry voter mood that lifted both Bernie Sanders and Donald Trump in 2016.
During National Review’s Alaska cruise in August 2015, Caddell gave a seminar on the updated results of his “Smith Project,” a series of polls he had conducted since 2013 and named after the outsider senator in the 1939 Frank Capra classic Mr. Smith Goes to Washington. I will never forget Caddell self-confidently declaring that the country was “in a pre-revolutionary moment,” with 84 percent believing that political leaders were more interested in protecting their power and privilege than doing what is right. Caddell noted that seven out of ten Americans no longer believe that the government receives its authority from the consent of the people, despite  the words of the Declaration of Independence.
In his polling, Caddell had tested a hypothetical Candidate Smith, whom he didn’t identify by party, age, race, or religion. He only said of him:

Candidate Smith’s beliefs are not based on liberal or conservative ideas, just fundamental American common sense. Smith says we can’t change anything with the usual politics, the usual politicians, and the usual interest groups. We need new leaders from mainstream America, like Candidate Smith, who take on the political elites and special interests, and put the American people in charge again.

Smith’s “favorable/unfavorable” numbers after reading that paragraph to voters was 77 percent favorable and only 11 percent unfavorable. Lee Hanley, the conservative donor and NR friend who financed Caddell’s research, told me on the cruise that “everyone else in politics is ignoring the volcano rumbling beneath them.”
Indeed. While I was impressed with Caddell’s analysis, I didn’t incorporate it nearly enough into my own writing on the 2016 election.
Caddell wasn’t a fan of Donald Trump. He was a fan of giving the sclerotic U.S. political system a kick in the rear and forcing it to respond to the concerns of millions of ordinary voters who felt ignored. In polling he conducted at the very beginning of the 2016 primary season, he found that none of the candidates fully satisfied voters or fit the description he gave of Mr. or Ms. Smith. But he knew that upstarts such as Bernie Sanders and Donald Trump would do much better than anyone thought. He was right.
In September 2016, after Trump won the GOP nomination, Caddell told me that he thought that Trump had a 40 percent chance of beating Hillary Clinton, even though he was being vastly outspent and his campaign was unconventional and run by outsiders and novices. As Caddell told The New Yorker at the time: “People didn’t think Trump had the temperament to be president. He clearly wasn’t the best Smith, but he was the ONLY Smith.”
In late 2017, Caddell told an audience at David Horowitz’s Restoration Weekend conference that it wasn’t clear just how successful a president that Donald Trump would be. But he had no doubt about the power of the message that brought him to the Oval Office. “Make America Great Again was the greatest slogan of my lifetime,” he said. “And I think that the most powerful idea was ‘Drain the Swamp.’”
All of this carries with it a measure of irony, given that Caddell began his career as the 21-year-old Boy Wonder who helped secure liberal George McGovern the 1972 Democratic presidential nomination. He was also the pollster for Joe Biden’s remarkable upset victory for the Senate in Delaware that year. Back then, Caddell felt Richard Nixon and the fossilized Democratic establishment were the major obstacles to progress.
McGovern lost in a landslide, but Caddell persevered and found an outsider candidate he felt could overcome the nation’s post-Watergate cynicism: former Georgia governor Jimmy Carter. His role in shaping Carter’s anti-Washington message was so successful that in the summer of 1976, his campaign manager, Hamilton Jordan, told reporters: “You know why Jimmy Carter is going to be president? Because of Pat Caddell — it’s all because of Pat Caddell.”
Of course, Carter’s presidency didn’t go well, and he lost to Ronald Reagan in a landslide in 1980. Caddell was harshly criticized for urging Carter to deliver his famous “malaise” speech in the summer of 1979, which created the indelible impression of a president accepting an American decline he saw as inevitable.
Though he rarely admitted to any mistakes, Caddell conceded that this speech weakened Carter’s position. But he argued that Carter’s failure was part of the overall problem of the Democratic party’s turning on America and losing confidence in it. He told Breitbart Radio in 2016: “What’s missing is a positive vision of restoring my party to what it once was, truly the party of the common man, as opposed to a hollowed-out party of . . . bicoastal elites that relies on divisive identity politics to win.”
Some Democrats believe that their party would be much better off if they had listened to Caddell. “Pat Caddell was not only a giant of polling and political consulting, he literally created and shaped the current polling industry,” Doug Schoen, a pollster for both Bill Clinton and Michael Bloomberg, told me. “He is in large measure responsible for the election of Donald Trump in 2016.”
From another side of the political spectrum, free-market pollster Scott Rasmussen praises Caddell’s insights:

He never lost sight of the disconnect between the American people and the political elites. He spent a lifetime raising the alarm about this growing problem and the threat it represented to America. He was a constant irritant to anyone comfortable with the status quo because he knew our nation could be so much better.

As for the future, Caddell may have been estranged from the Democratic party but he had contempt for the Republican party’s leadership. He accurately predicted that the GOP would lose the House in the 2018 midterms, caustically explaining the loss to Breitbart News as follows:

The Republican party is essentially wusses. They will not fight. They don’t believe in fighting. They just lay down and roll over, and usually for their donor class, who are basically antithetical to 90 percent of Republicans and what they want.

Pat Caddell was a man with a short temper, who like many brilliant people insulted some adversaries he might instead have ignored. He angered the establishment of both major parties, ultimately becoming a man without a party. Critics will say he alienated so many in politics that his influence in the circles of the powerful eventually vanished. But he kept surveying people and honing his warnings about an alienated America, even if few would listen.
We now live in a country where the political landscape is almost exactly what he predicted it would be.
Posted by jtf at 9:14 AM