Frank Robinson wasn't easy to get to know, but he was certainly worth the effort

Frank Robinson was one of the toughest players in the history of baseball, but the hard shell you had to break through to get to know him was just a very effective disguise.
I found that out the hard way soon after I was hired by The Sun to take over the Orioles beat in January of 1990. The team was coming off its heart-warming “Why Not?” season and I was excited to get started. I was living in Southern California at the time, so I called Frank at his home in Los Angeles, introduced myself and asked him if I could take him to lunch and get acquainted.
“I don’t want to have lunch with you,” he said brusquely. “Talk to me in Florida.”
And he hung up.

So, imagine how I felt when I finally tiptoed up to him at the Orioles’ minor league facility at Twin Lakes Park in Sarasota a few weeks later. He was sitting in a golf cart watching some of the team’s young prospects and I started to introduce myself.
“I know who you are,” he said in the same tone as before, then motioned for me to get into the cart. Within a few minutes, I knew I was in for a great ride.
“The whole thing was cracking that shell,” said former Orioles public relations director Rick Vaughn, who worked closely with Robinson throughout the 3 ½ seasons that Frank was Orioles manager. “He had that tough exterior and you had to be persistent to get through it, but what was inside was a really great person.
“There was a real big heart in there, but he didn’t always let you see it.”
When Robinson died at 83 on Thursday after battling a long illness, he was already one of baseball’s immortals. He remains among the truly elite players in the history of the sport and was the first African-American manager in both the American and National Leagues.
Though he spent less than a third of his playing career here and his managerial tenure with the Orioles also was relatively short, he will always hold a special place in the sports history of Baltimore and Baltimore always held a special place in his heart.
He spent much more time playing for the Cincinnati Reds, where he broke in as the National League Rookie of the Year in 1956, and made history when he broke the managerial color barrier in Cleveland, but he insisted on entering the National Baseball Hall of Fame as an Oriole when he gained induction in 1982.
“Today is a very sad day because I lost not only my teammate, but also a very dear friend,’’ fellow Orioles legend Brooks Robinson said in a statement released by the Orioles. “I loved Frank and got to know him so much better after we both retired. … As a player, I put Frank in a class with Willie Mays, Hank Aaron, and Mickey Mantle. He was the best player I ever played with.”
Of course, he’s revered around here because he immediately turned a pretty good Orioles team into a great one after he arrived in Baltimore for the 1966 season. He won his second MVP award that year and led the O’s to their first World Series championship. During his six seasons hammering baseballs all over Memorial Stadium, the Orioles reached the World Series four times. They’ve been back only two times since.
“He brought a new attitude to the Orioles,” Boog Powell said. “Guys would be standing around before a game, talking to players on the other team. Frank said, ‘Cut that crap out — they’re not your friends until we’re done.’ ”
Robinson made many long-standing friendships during those years, so he felt right at home when he returned to Baltimore during the 1980s to coach, manage and serve as front office executive. He is the only former player ever to serve in all those post-playing roles for the Orioles.
“He was like a brother to me,” said teammate Don Buford, who had stayed in close contact during Robinson’s long illness. “I saw him a week ago. He didn’t complain, just took it one day at a time. Frank was a strong-charactered individual and was prepared for [death]. In life, he gave back to his fellow man in every way that he could — a trailblazer in his own right.” 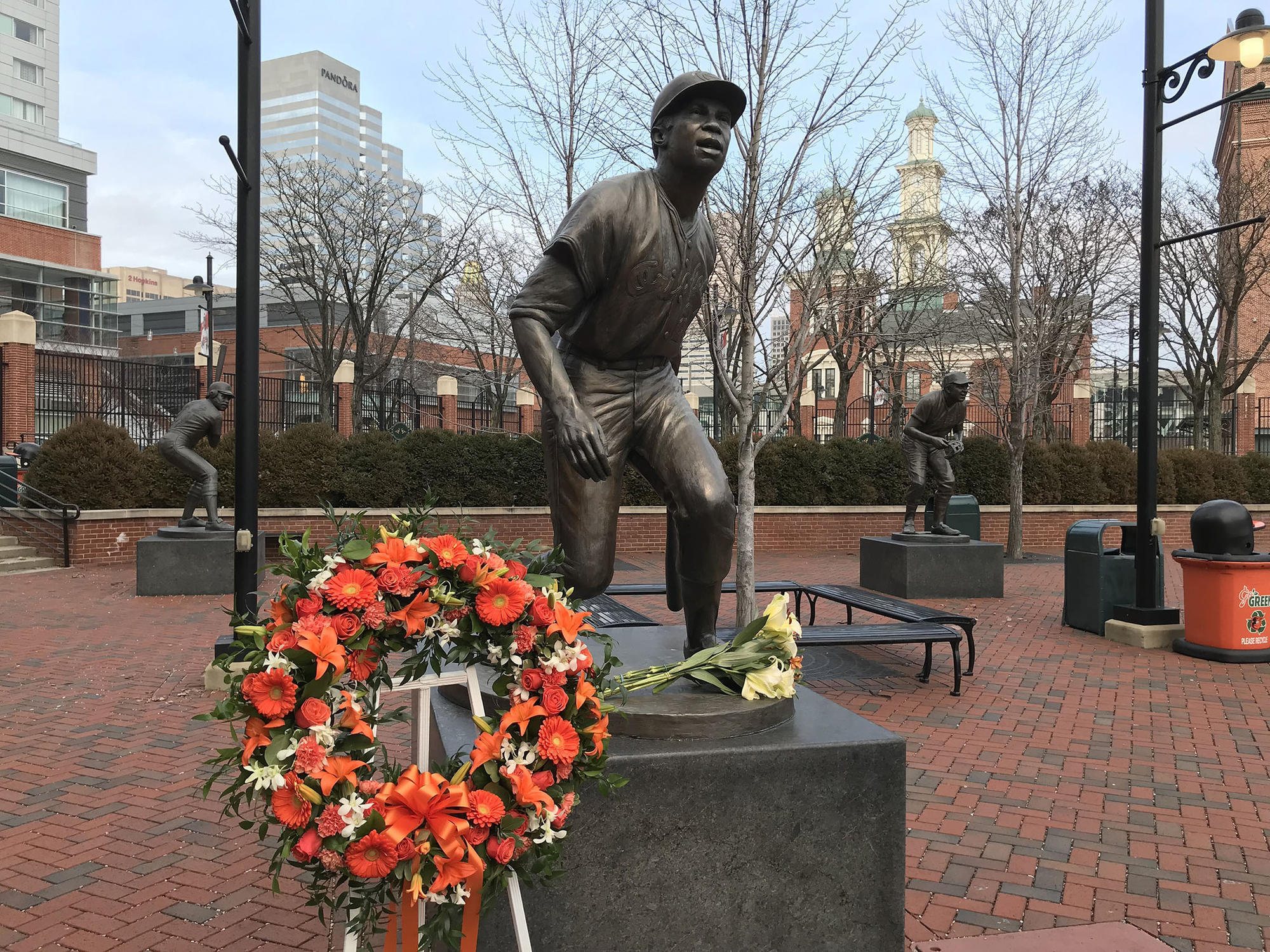 Frank Robinson statue at Camden Yards
He was a fierce competitor who tolerated nothing less from the players he coached and managed, which might explain how an Orioles team that lost 107 games in 1988 reached the final weekend of the 1989 season still in contention for a playoff berth.
Why not, indeed. Robinson had to stare down the racism that confronted all of the African-American players of his day. He even faced resistance in Baltimore when he tried to buy a home here during the turbulent civil rights era.
Still, he enjoyed a long love affair with Baltimore and you didn’t have to crack through that hard shell to figure that out.
He also had a sharp sense of humor that became obvious during his time way back when he was the chief judge of the famous Orioles “Kangaroo Court.” Decades later, he clearly enjoyed calling me only by my last name and I could tell by his intonation whether he approved of one of my questions or had an issue with one of my game stories.
Still, I never had much luck with Frank on the telephone. During his time managing the Montreal Expos, I called the team’s public relations director and asked him to set up a phone interview for me, but didn’t hear back.
I called again and the Expos PR guy said that Frank did not want to talk to me, which made no sense to me since I thought I had a very good professional relationship with him. So, I showed up the next time the Expos passed through Philadelphia and asked him why he wouldn’t take my call.
“Because I wanted to see if you’d fly all the way to Canada to talk to me,” he said.
Frank had a very good memory, but I seriously doubt that was a sarcastic reference to our first phone call 14 years earlier.
Wish I could call him and ask.
peter.schmuck@baltsun.com
twitter.com/SchmuckStop
Read more from columnist Peter Schmuck on his blog, "The Schmuck Stops Here," at baltimoresun.com/schmuckblog.
Posted by jtf at 9:34 AM