Why We Need Voter-ID Laws Now

Voter fraud is a scandal, and the attorney general can’t look away anymore.
By John Fund
http://www.nationalreview.com
April 9, 2012 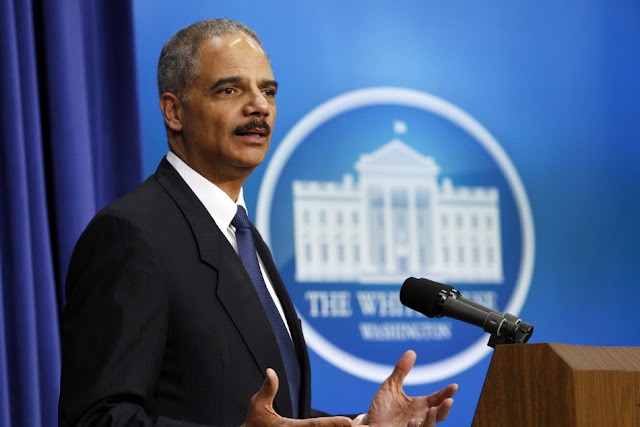 Attorney General Eric Holder is a staunch opponent of laws requiring voters to show photo ID at the polls to improve ballot security. He calls them “unnecessary” and has blocked their implementation in Texas and South Carolina, citing the fear they would discriminate against minorities.
I wonder what Holder will think when he learns just how easy it was for someone to be offered his ballot just by mentioning his name in a Washington, D.C., polling place in Tuesday’s primaries.

Holder’s opposition to ID laws comes in spite of the Supreme Court’s 6–3 decision in 2008, authored by liberal Justice John Paul Stevens, that upheld the constitutionality of Indiana’s tough ID requirement. When groups sue to block photo-ID laws in court, they can’t seem to produce real-world examples of people who have actually been denied the right to vote. According to opinion polls, over 75 percent of Americans — including majorities of Hispanics and African-Americans — routinely support such laws.

One reason is that people know you can’t function in the modern world without showing ID — you can’t cash a check, travel by plane or even train, or rent a video without being asked for one. In fact, PJ Media recently proved that you can’t even enter the Justice Department in Washington without showing a photo ID. Average voters understand that it’s only common sense to require ID because of how easy it is for people to pretend they are someone else.

Filmmaker James O’Keefe demonstrated just how easy it is on Tuesday when he dispatched an assistant to the Nebraska Avenue polling place in Washington where Attorney General Holder has been registered for the last 29 years. O’Keefe specializes in the same use of hidden cameras that was pioneered by the recently deceased Mike Wallace, who used the technique to devastating effect in exposing fraud in Medicare claims and consumer products on 60 Minutes. O’Keefe’s efforts helped expose the fraud-prone voter-registration group ACORN with his video stings, and has had great success demonstrating this year in New Hampshire, Vermont, and Minnesota just how easy it is to obtain a ballot by giving the name of a dead person who is still on the rolls. Indeed, a new study by the Pew Research Center found at least 1.8 million dead people are still registered to vote. They aren’t likely to complain if someone votes in their place.

In Washington, it was child’s play for O’Keefe to beat the system. O’Keefe’s assistant used a hidden camera to document his encounter with the election worker at Holder’s polling place:

Poll Worker: I do. Xxxx 50th Street NW. Okay. [Puts check next to name, indicating someone has shown up to vote.] Will you sign there . . .

Man: I actually forgot my ID.

Poll Worker: You don’t need it; it’s all right.

Poll Worker: As long as you’re in here, and you’re on our list and that’s who you say you are, we’re okay.

Poll Worker: Sure, go ahead.

Man: I’ll be back faster than you can say furious!

Note that O’Keefe’s assistant never identified himself as Eric Holder, so he was not illegally impersonating him.

Nor did he attempt to vote using the ballot that was offered him, or even to accept it. O’Keefe has been accused by liberals of committing voter fraud in his effort to expose just how slipshod the election systems of various no-ID-required states are, but lawyers say his methods avoid that issue. Moreover, he has only taped his encounters with election officials in jurisdictions that allow videotaping someone in public with only one party’s knowledge.

As for the D.C. Board of Elections, its loose practices are a matter of record. Last year, a community activist uncovered the fact that Andrea Pringle, the new deputy chief of staff to Washington, D.C., mayor Vincent Gray, had voted illegally in the district even though she admitted to living in Maryland. She resigned in the face of the criticism.

Nor is she the only example. State Senator Harold Metts of Rhode Island got a photo-ID law put on the books in his state last year after he was told by several constituents of a pattern of voter fraud in his home town of Providence. Indeed, his own state representative and her daughter had their votes stolen by someone voting in their names in one election. “The old system was not set up to readily weed out fraud, and it would be very hard to prove,” he told the Woonsocket Patch newspaper. Metts, the state senate’s only African-American member, says that he took a lot of heat from national Democrats for getting the ID law approved by an overwhelmingly Democratic legislature. But he says party loyalty only takes him so far. “It’s time to stop crying wolf and make the voter-ID law work for those on both sides of this issue who want to ensure the integrity of the system, while guarding against disenfranchisement.”

Several of the state laws that require photo ID also make new provisions to enhance security for absentee ballots, the tool of choice for many fraudsters. Last year, Lessadolla Sowers, a member of the NAACP’s Executive Committee in Tunica County, Miss., was sentenced to five years in prison for fraudulently casting absentee ballots for ten other people. “This crime cuts against the fabric of our free society,” Judge Charles Webster said at the sentencing hearing.

Scandals such as that one helped convince 62 percent of Mississippi’s voters to approve a photo-ID law last November. The measure passed in a clear majority of counties that are majority-black. As with other ID laws, a free state-issued photo ID is available to anyone who says they can’t afford one.

But the groups opposing voter ID won’t let the facts get in their way. James Clyburn of South Carolina, the third-ranking member in the House Democratic leadership, compares voter-ID laws to “Jim Crow” provisions that blocked people from voting in the last century, and said he is “very, very anxious” that the Supreme Court “as it is presently constituted” will support the new laws. But as previously noted, the Supreme Court already has supported voter ID, with its opinion authored by its most liberal member at the time.

Some criticism of voter-ID laws has morphed into intimidation. This week, Color of Change, co-founded by former Obama special adviser Van Jones, threatened a boycott against Coca-Cola and Walmart because they financially supported the American Legislative Exchange Council, which has helped state legislators draft some of the voter-ID laws. Within hours, Coca-Cola resigned its membership in ALEC. So far Walmart is holding out by arguing that ALEC is involved with dozens of issues, many of them of direct concern to Walmart shareholders.

There is something surreal about the voter-ID issue. As James O’Keefe demonstrates, it is comically easy to commit voter fraud in person, and, unless someone confesses, it’s very difficult to ever detect. With absentee balloting, there is a paper trail that makes it easier to uncover fraud, making it a problem that even some critics of photo ID will admit.

Other than hypotheticals, there are very few cases of legitimate voters who were unable to have their vote counted because they lacked ID. People who show up without photo ID at the polls are allowed to cast a provisional ballot that is counted after proof of identity is offered.

“From voter fraud to election chicanery of all kinds, America teeters on the edge of scandal every November,” says Larry Sabato, the director of the Center for Politics at the University of Virginia and author of a comprehensive survey of voter fraud called “Dirty Little Secrets.” The fact that so many people want to thwart legitimate and prudent efforts to improve ballot integrity has become a scandal in its own right. Attorney General Holder is unlikely to agree with that, but after what happened at his polling place last Tuesday, he should at least understand that voter fraud itself is a scandal worth investigating.

— John Fund, a writer based in New York, is the author of Stealing Elections: How Voter Fraud Threatens Our Democracy.
Posted by jtf at 10:12 AM