Seth Grahame-Smith's New Book Unholy Night Asks: What the Hell Were the Three Wise Doing There? 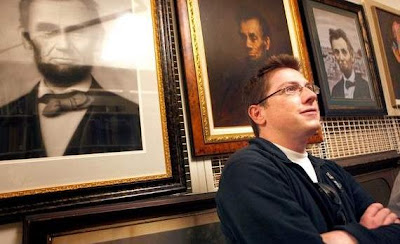 After mixing the Victorian era with the world of the undead in Pride and Prejudice and Zombies and Abraham Lincoln: Vampire Hunter, Seth Grahame-Smith has become the highly profitable king of literature's mash-up genre. Lionsgate is developing P&P&Z into a movie, while the film version of ALVH, produced by Tim Burton, will be out this summer. He's also co-written the script to the upcoming Burton-directed Dark Shadows.

Clearly, stepping on the tender toes of Jane Austen enthusiasts and Lincoln historians has paid off. Now, with his latest novel, Unholy Night (Grand Central Publishing), coming out this Tuesday, April 10, Grahame-Smith treads on the holiest of holy grounds: The Bible, namely the nativity story. You know -- the birth of Jesus Christ, The Messiah, King of Jews. Unholy Night (it, too, snatched up by Warner Bros. last year) turns the little recorded journey of the Three Wise Men into a fictional adventure tale that's equal parts history and mystery and fun.

Unlike the vampire trend of the last couple of years, Grahame-Smith was only very recently hit by the Bible bug. After noting that there are as many Jesus biographies as there as Lincoln ones, Eric Spitznagel asked the author in a 2010 Vanity Fair article if he'd ever tackle religion. "I...hesitate to go biblical," Grahame-Smith said. "It gives me anxiety just thinking about it."

"At the time I said that," Grahame-Smith now says from his L.A. home, "I meant it. And I still do have anxiety." He eventually came around.

"Maybe it was a question in my subconscious," he says. "I was literally driving in Los Angeles in the middle of summer -- not the season where I would be confronted with the imagery -- and a random question popped in: What were they [the Three Wise Men] doing there? It struck me how little there is about them in the scripture, yet they're so revered and such an integral part of the Christmas tradition. It lead me to extrapolate a story and fill in the gaps."

And there are plenty of gaps to fill in. The nativity story is fairly simple: Three kings traveling from the East follow the star of Bethlehem to pay homage to the infant Jesus, bearing gold, incense and myrrh. Instead of hightailing it back to King Herod, who'd just ordered the death of all newborn males in Judea, they take off in unknown directions. Where the scripture ends and Grahame-Smith's imagination takes off is what makes Unholy Night an entertaining read.

In the author's hands, the Three Wise Men are a trio of thieves led by the roguish and randy Balthazar, who gets into as much trouble with the ladies as does the law. After escaping King Herod's prison, they stumble upon Joseph, Mary and the future prophet in the manger and help them flee to Egypt, along the way encountering bloody battles, mythical creatures and even a hot little love interest for the head thief in the form of a spitfire palm reader.

While the campy qualities here are similar to Grahame-Smith's previous books -- Joseph putting a Roman centurion into a head lock, for one -- Unholy Night is ultimately about a man struggling with his faith. Plagued by revenge for a family murder, Balthazar not only doesn't believe in God, but denounces him.

"He represents an increasingly modern view towards faith, the journey that a lot of people go on," says Grahame-Smith. "When people are young, they get absorbed into the pageantry of religion. In their '20s and '30s, they get busy doing other things and become cynical and start questioning. Your religion sort of falls by the wayside. Later in life, people tend to return to religion. Balthazar represents all those stages. He's there to ask the questions that a lot of readers ask."
The author sees a lot of his own upbringing in his anti-hero's transformation from doubt to acceptance. 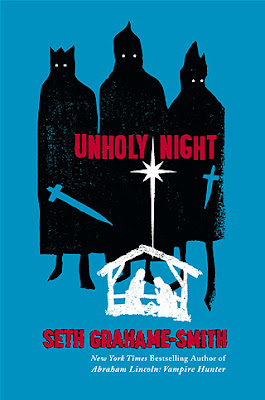 Grahame-Smith was born Seth Greenberg to a Jewish family and grew up in the unironically-named town of Bethel, Connecticut. His parents divorced when he was three and his mother changed her and Seth's last name to Grahame in a nod to one of her favorite authors Kenneth Graham, and later to Smith, after her second husband.
"All of the sudden we started going to Episcopal church," says Grahame-Smith. "My whole life I've been able to see the Judeo-Christian traditions from both sides. Finding a religious identity when you're growing up and picking the things that work and don't work for you -- everyone goes through that. My religious beliefs have always been in flux."
Even after the controversy of revising one of classic literature's greatest characters and America's most revered president, Grahame-Smith knows he tinkering with a much deeper sensibility with Unholy Night (coming out just a few days after Easter).

"There's always going to be a percentage of people who are going to dismiss you out of hand," says Grahame-Smith. "But it's not a book about Jesus or his ideals. I didn't want to make any judgments or preach to anybody or detract from anybody's beliefs. I wanted to focus on Balthazar and built the story around his journey. The challenge was not to ask such damning or damaging questions, or make him so anti-religious that it would turn readers off. I deal in genre literature and I always want the genre to be strong: the action, the adventure, the magic, the fantasy elements. First and foremost, I want it to be entertaining."

Seth Grahame-Smith
Reviewed by Anthony Breznican
Entertainment Weekly
http://www.ew.com/
April 6, 2012
Seth Grahame-Smith is like the world's most deranged history teacher — you can't trust anything you learn from him, but you'll never forget it, either. He kicked off the mash-up genre by besieging Jane Austen's British countryside with hordes of undead in Pride and Prejudice and Zombies and perfected it by pitting our 16th president against Confederate bloodsuckers in Abraham Lincoln: Vampire Hunter. His latest novel, Unholy Night, uses the birth of Jesus as the backdrop for a fantasy action-adventure akin to fusing Game of Thrones with the Gospel of Luke.

There are many mash-ups out there, but most work only as spoof. Grahame-Smith takes his history seriously, using it to add texture and realism before releasing the craziness. Here his main character, Balthazar, one of the trio we now know as the three kings, is a sort of New Testament John Dillinger, a well-known murderous thief who joins with fellow scoundrels Melchyor and Gaspar to escape Herod, the pus-oozing Judean tyrant who wants their heads. Herod also wants to slay every newborn male in the region, which is how the fugitives align themselves with Mary and Joseph, naive new parents whose infant somehow tempers the ruthlessness of the thieves.

After establishing his turn-of-A.D. bona fides, Grahame-Smith bids history adieu, with the nativity gang pursued at various points by a black-magic sorcerer, a young Pontius Pilate's Roman legion, and a mob of Egyptian zombies. The unhinged imagination is fun, but it's Grahame-Smith's depiction of sacred figures as flawed humans that makes the book feel like a secret account of events that have been sanitized by legend. It's risky to turn a holy birth into a bloody sword-and-sandal yarn, but if you can forgive that, I bet you-know-who would. A