It’s Not the Arab Spring, It’s the Nahda

Uprisings in the Middle East are about the “Islamization of life,” not democracy.
By Clifford D. May
http://www.nationalreview.com
April 12, 2012 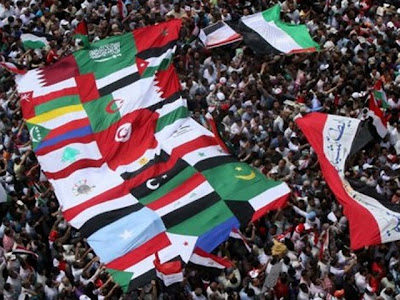 Demonstrators hold the flags of Arab nations aloft during a rally in Cairo's Tahrir Square. PHOTO: AFP
The term “Arab Spring” was born of optimism, not analysis. When a downtrodden fruit monger in Tunisia self-immolated, setting off a series of regional upheavals, many journalists, diplomats, and academics thought they heard an echo of the Prague Spring of 1968. That was when Czechoslovakia boldly initiated democratic reforms — an experiment quickly extinguished by a Soviet invasion.
Americans do not like to see people living under the jackboots of dictators. We instinctively root for the revolutionaries hoping there are George Washingtons and Thomas Jeffersons among them. But the American Revolution was an historical anomaly. The French Revolution, the Russian Revolution, the Iranian Revolution — in these and other instances, one form of despotism simply replaced another.

Are there freedom fighters in the Muslim world? Yes, without question. But not many. And most are Western-educated intellectuals, no match for disciplined Islamic militants operating from an international network of mosques and non-governmental organizations, drawing from a bottomless well of oil money, and more than willing to use violence — or to stand aside as others use it — to achieve their objectives.

Islamists are calling this stormy new season the Nahda, Arabic for renaissance, which is French for rebirth — in this case, they believe, a rebirth of global Islamic power. Khairat Al-Shater, the deputy guide of the Egyptian Muslim Brotherhood and its recently announced presidential candidate, phrased it (in a speech he made a year ago and which was recently translated by the Hudson Institute) this way:


The mission is clear: restoring Islam in its all-encompassing conception; Subjugating people to God; instituting the religion of God; the Islamization of life, empowering of God’s religion; establishing the Nahda of the Ummah [Muslim nation] on the basis of Islam.

Last week, a delegation of Islamists from Egypt, Tunisia, Morocco, Jordan, and Libya paid a visit to Washington. The Carnegie Endowment for International Peace held a one-day conference: “Islamists in Power: Views from Within.” Jessica Mathews, Carnegie’s president, opened the discussion by noting that the “rise of Islamist parties is a political reality,” one which “has sparked a great deal of uncertainty, even trepidation” while “Islamist parties remain poorly understood.” No doubt about any of that.

The panelists ranged from dour to congenial. They used words the audience was eager to hear: “democracy,” “freedom,” “pluralism.” More than one said their goal is a “civil society, not a theocratic state.” They emphasized the desire of their peoples for “justice,” “dignity,” and “Islamic values,” but made little effort to define those terms.

Though they vowed “respect for the rights of minorities,” no one specified what rights minorities are entitled to as subjects of the “Islamic states” they envision. There was not a word about the escalating attacks on Egypt’s Coptic Christians; the Saudi Grand Mufti’s fatwa that more churches be demolished; Sudan’s mass murders of both Christians and the black Muslims of Darfur; the unspeakable atrocities committed by the Taliban; the Iranian regime’s continuing repression at home and support for terrorism abroad; the mounting death toll in Syria; Hezbollah’s power grab in Lebanon; Hamas’ commitment to the extermination of Israel; or al-Qaeda.

That is not to say these Islamists marched in lockstep. Mustapha Elkhalfi, minister of communications for Morocco — where a centuries-old monarchy has so far weathered the storms — said the priority should be to adopt policies that can reduce “poverty, illiteracy, and unemployment.”

By contrast, Abdul Mawgoud Rageh Dardery, a member of parliament from Egypt’s Freedom and Justice Party, said, “Many Egyptians tell me: We would like to live free even if we become hungry.” He did not say whether he thought it would make Egyptians feel less free to have Westerners in Cairo supporting fledgling civil-society groups, or businessmen and tourists sipping cocktails in hotel bars, or to restrain terrorists from firing missiles at Israel from Egyptian territory.

Nabil Alkofhai, of Jordan’s Muslim Brotherhood and Islamic Action Front Party, struck a chord with me when he said that Arab peoples do not want “to remain on the margins of human civilizations.” But a few moments later he insulted the audience’s intelligence by asserting that “the Islamic world . . . did not witness anything in its history [of] over 1,400 years that is called religious oppression.”

Similarly, I thought Dardery had a point when he said that sharia simply means law — and that Islamic law can be variously interpreted. But then he said that jihad means “exerting an effort” and so “I am doing jihad sitting here.” Studying hard, he added, is jihad; not eating too much — that, too, is jihad. I waited for him to add something about jihad as defined by Osama bin Laden, who said it “means fighting only, fighting with the sword,” or Ayatollah Khomeini, leader of Iran’s 1979 revolution, who said:


Those who study jihad will understand why Islam wants to conquer the whole world. . . . Islam says: Kill all the unbelievers just as they would kill you all! . . . Islam says: Whatever good there is exists thanks to the sword and in the shadow of the sword! People cannot be made obedient except with the sword! The sword is the key to paradise, which can be opened only for holy warriors!

The Arab Spring was a mirage. The Nahda is a reality. By all means, let’s talk to the Islamists. But let’s listen carefully to what they say. Let’s not be complicit in our own deception. Let’s watch what they do. Let’s not confuse gradualism with moderation. Journalists, diplomats, and academics might understand all this if they were relying less on optimism and more on analysis.

— Clifford D. May is president of the Foundation for Defense of Democracies, a policy institute focusing on national security and foreign policy.
Posted by jtf at 9:26 AM