He is an enemy combatant, so treat him as one. 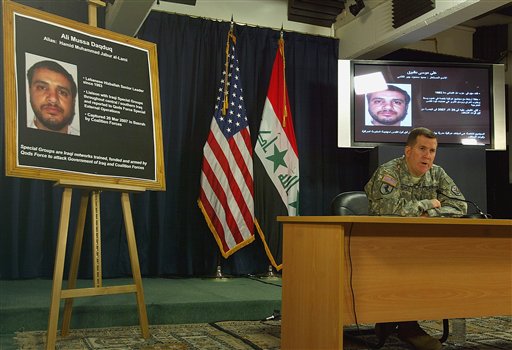 U.S. military spokesman Brig. Gen. Kevin J. Bergner speaks during a press conference in Baghdad, Iraq, Tuesday, July 2, 2007. Iran is using the Lebanese Shiite militia Hezbollah as a "proxy" to arm Shiite militants in Iraq and Tehran's elite Quds force helped militants carry out a January attack in Karbala in which five Americans were killed, Bergner said Monday. On screen and at left is the image of a senior Lebanese Hezbollah operative, Ali Mussa Daqduq, who was captured March 20, 2007, in southern Iraq.

An Iran-backed Hezbollah commander who killed American soldiers in cold blood has been in U.S. custody for four years. Most Americans would see this as a good thing. For the Obama administration, it is a vexing dilemma. This highlights, yet again, why the country can’t afford a second Obama administration.

Ali Mussa Daqduq has been a Hezbollah operative for almost 30 years. He is the hardcore. When he joined back in 1983, the “Party of God” (hizb Allah) was just getting its start as Iran’s forward militia in Lebanon, announcing its allegiance to Ayatollah Ruhollah Khomeini and killing hundreds of Americans in bombings, abductions, and hijackings that targeted U.S. military personnel, intelligence agents, and civilians. Daqduq quickly climbed the ranks, becoming a top terrorist trainer in an organization so adept that al-Qaeda began taking its instruction in the early 1990s. He rose to command Hezbollah’s most lethal cells and even ran the security detail for its leader, “secretary general” Hassan al-Nasrallah.

It was only natural, then, that Iran turned to Daqduq in 2005 when the mullahs decided to reprise in Iraq the strategy that had worked so well in Lebanon. He was tasked with building an Iraqi version of Hezbollah: a jihadist network that would first use terrorist attacks to sap America’s will to remain in the region and then be poised to seize de facto control of the country — to run Iraq as an Iranian satellite.

It worked like a charm. As Bill Roggio recounts at The Long War Journal, Daqduq partnered with Iran’s deadly special-operations unit, the Quds Force, to set up an intricate web of Shiite terror cells.

Battalions of 20 to 60 recruits were brought to Iranian bases for schooling in close combat tactics, kidnapping, and intelligence collection, while also learning to use explosively formed penetrators, mortars, rockets, and sniper rifles. When their training was complete, they were loosed on Iraq. Fueled by Iranian supplies, they targeted and killed American and allied forces. Most notoriously, they carried out the January 2007 Karbala massacre, in which five American soldiers were killed, four of them as captives, handcuffed and shot before U.S. rescue teams could close in.

Daqduq was captured by American forces two months later. He has been in the custody of our military in Iraq ever since. He is not a defendant. He is not a capo in some Iranian Cosa Nostra family. He is a terrorist enemy of the United States, who has committed atrocities against American soldiers during a war authorized by Congress. Compared with him, most al-Qaeda jihadists are pikers. Hezbollah is as bad as it gets, and Daqduq is as bad as Hezbollah gets.

If one accepts that the object of war is to defeat the enemy, there is no doubt about what must happen here. Under the laws of war, Daqduq is an enemy combatant: He may be detained until the conclusion of hostilities, subjected to trial by military commission, and put to death — or, at the very least, imprisoned for the rest of his life.

These laws of war are codified in American statutes. Candidate Obama may have pined for a return to the law-enforcement approach to counterterrorism (i.e., treating alien enemies as mere defendants entitled U.S. constitutional protections and civilian trials), but President Obama has grudgingly accepted — at least on paper — the need to maintain combatant detention and trial by military commission. In 2009, he signed a cosmetic revamping of the Military Commissions Act (MCA). Under it, unlawful enemy combatants — who are now called “unprivileged enemy belligerents,” lest the use of Bush terminology betray the adoption of Bush methods — may be detained by our armed forces and tried by commission if they have “engaged in” or “purposefully and materially supported” “hostilities against the United States.” The definition fits Duqdaq to a tee.

In saner times, this one would be easy. Daqduq should be transferred to Guantanamo Bay. Once the military determines he is no longer of use for intelligence purposes (we’re told Daqduq talked after originally pretending to be a deaf mute), he should be given a commission trial for war crimes and, upon conviction, executed. If there is a lack of sufficient admissible evidence to try him — if, for example, our knowledge of his atrocities comes from intelligence sources or confessions that can’t be used in a trial — he should be detained indefinitely. Case closed.

But for an administration that has politicized justice more than any in history, nothing is that simple. Displaying his familiar penchant for taking one position in public while unleashing the faceless bureaucracy to undermine it, Obama agreed to military commissions strictly for electoral purposes. By signing the MCA, he pandered to a public strongly opposed to civilian trials for enemy combatants; behind the scenes, though, the Lawyer Left that staffs Obama’s Justice and State Departments works to ensure that commissions will not actually be used — or, at least, that they will be used only when public outcry forces the administration’s hand, as it did in the case of Khalid Sheikh Mohammed and the 9/11 plotters.

With their water carriers in the legacy press cooperatively mum, administration officials figure few cases will get the kind of attention paid to KSM. They’re right. Rather than authorize a commission trial, Obama released al-Qaeda terrorist Binyam Mohammed to Britain, where he is free. There was nary a peep, even though Mohammed had plotted with convicted terrorist Jose Padilla to carry out a second wave of post-9/11 attacks. Similarly, the Qazali brothers, two of the top Iraqi terrorists trained by Daqduq, were released, even though they were complicit in the Karbala massacre.

Enemy combatants sprung from Gitmo return to the jihad at a very high rate, but administration officials shrug their shoulders and bleat that criminals recidivate all the time. And right now, little is reported about the Obama Justice Department’s efforts to cut the 23-year sentence of Abdurrahman Alamoudi, a Hezbollah and Hamas supporter who financed terrorist organizations and plotted with the Qaddafi regime to kill Crown Prince (now King) Abdullah of Saudi Arabia. As long as the Obamedia averts its eyes, the president can chest-beat as the fierce, anti-terrorist slayer of Osama bin Laden, while his minions quietly slip jihadis out the back door.

Daqduq is supposed to be no exception. The Obama administration does not want to transfer him or anyone else to Gitmo, because the president and his base ludicrously claim that the existence of Gitmo causes terrorism.

Similarly, the administration doesn’t want to give him a military commission — after all, the president ran against commissions, and successful military prosecutions would create more public pressure to use the commission system, infuriating Obama’s base. Some administration officials, particularly in the Justice Department, would like to transfer Daqduq to the United States for a civilian trial. They know, however, that Americans would react angrily, as they did when Attorney General Eric Holder tried to orchestrate a Manhattan trial for KSM. With the 2012 election looming, the administration realizes this is not the best time to remind people that the last time DOJ whisked an enemy combatant into Manhattan — Ahmed Ghailani, who helped bomb the U.S. embassies in Kenya and Tanzania — a jury acquitted him on 284 out of 285 counts.

In short, the administration is ensnared in a web of its own making. It has politicized terrorist trials just as it has politicized terrorist detention. The latter lunacy means our forces now kill enemy terrorists we’d be better off capturing and interrogating. The former is leading the administration to opt for releasing enemy terrorists — even killers of American troops — so Obama won’t have to hand-wring over whether they get civilian or military prosecution.

The plan was to transfer Daqduq to the Iraqi regime as early as yesterday — without fanfare, the administration hoped, the debt ceiling crisis having saturated news coverage on a mid-summer Friday. But the Associated Press got wind of the transfer, and its brief report provoked outrage. Senate Republicans, joined by independent Joe Lieberman, fired off a letter to secretary of defense Leon Panetta, ballistic at the notion that the United States would surrender “the highest ranking Hezbollah operative currently in our custody.” Inevitably, the senators observed, Daqduq would return to the jihad “to harm and kill more American servicemen and women” when Iraq releases him, as these new “allies” of ours have done with other terrorists.

The unexpected blowback caused the administration to retreat on its release plan . . . at least for the moment. Nevertheless, under the security agreement the Bush administration negotiated with Iraq’s Maliki government, our military will no longer be permitted to detain prisoners in Iraq after the end of this year. Obama cannot vote present on this one: He’ll need to decide whether Daqduq gets military detention and trial outside Iraq, civilian prosecution inside the United States (which would require ignoring the will of Congress, including laws excluding known terrorists from our country), or the release for which Iraq has been clamoring under intense pressure from our Iranian enemy.

For an American president committed to American national interests, this would be a no-brainer. For Obama, it’s a cliffhanger. From how many more cliffs can we afford to hang with this guy?

— Andrew C. McCarthy, a senior fellow at the National Review Institute, is the author, most recently, of The Grand Jihad: How Islam and the Left Sabotage America.
Posted by jtf at 7:29 AM