As Borders fades, so does bookstore magic 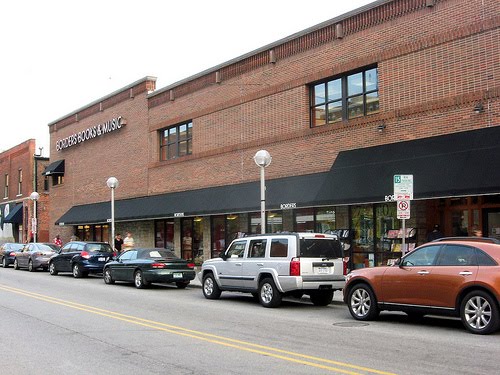 The Borders store on State Street in Ann Arbor, Michigan.

I still remember walking into the original Borders bookstore in Ann Arbor. It seemed to take up the entire block.

"You gotta see this place!" a friend had gushed, and when we pulled open the doors, I knew what he meant. A symphony exploded in my head. This was 1985, a little more than a decade after Tom and Louis Borders, two brothers who were students at the University of Michigan, slapped together a used book operation on the second floor of a building.

Now, here on State Street, was this massive pantheon to the written works of the world. New books. Used books. Local authors. International authors. The classics. The arts. Politics. History. Miles of paperbacks. Endless aisles. As a young writer, you wandered through the place and said, "One day, maybe me..."

Last week I read that Borders is on the brink of liquidation. Barring some final miracle, the company that grew from one Ann Arbor outlet to more than 1,200 stores worldwide would be reduced to scraps, sold in pieces like the bargain-bin books that once sat outside its entrance.

Of all the words I formed when I first walked through those doors, "extinction" was the furthest from my mind.

What has happened to the American bookstore? The cozy yet slightly musty place where a reader could wander among the great storytellers of our time and faintly hear them calling from the shelves, "Read me! I'm a heartbreaking love story! Read me, I'll tell you the history of the Great War!..."

It grew from a dimly lit space to a high-ceilinged warehouse to a coffee-smelling, couch-laden superstore to a multipurpose entertainment outlet. The old bookstores were swallowed by chains. Packaging, bundling, synergizing and the tantalization of profits became the principles. Actual books in these places seemed to be an afterthought, nudged aside by videos, calendars, music and electronics.

But Borders? Surely Borders was safe, right? Didn't we have a soft spot for them? Anyone who ever made that pilgrimage to Ann Arbor on a Sunday afternoon, anyone who ever lost track of the hours while cooing at the sheer enormity of the written word, would insist, absolutely and without hesitation, that Borders, like mankind, would somehow survive.

Instead, we are once again reminded that no matter how lovely the casing, how beautiful the print, how fetching the binding or how stunning the cover, business is still business.

And books are a tough business.

The original Borders operation sold to Kmart in 1992. I guess that was the start of the end. It was somewhat merged with Waldenbooks, was expanded, massaged, made international. It multiplied, went electronic, grew a Web presence, developed an e-reader. It became part of the very expansion that would jeopardize the industry.

But for all the maneuvers, Borders hasn't made a profit in five years, and it keeps getting smaller, losing people, closing doors and praying for a savior. It has been in bankruptcy since February, and its last best chance may have faded last week when a private equity investor deal collapsed.

The problem is people don't love books the way they once did, nor do they read them the same way. Cheaper electronic versions undermine the need for shelf-space. Younger audiences who haven't grown up with rainy afternoons spent inside book pages, don't snap up the latest great read -- unless there's a certain vampire or wizard attached. The backlists of mid-level authors are not lucrative for the balance sheet. And the pressure for profits to keep the stock price high runs diametrically opposite to the slow, meandering, long-term customer approach that used to define bookstores.

I have shopped in Borders, spoken in Borders, done Web programs with Borders, even met a series of Borders CEOs. These are good people who still, for the most part, love books. And for years, we in Michigan always considered it our backyard chain.

But the world has changed. The printed word is gasping. A symphony doesn't play anymore when you pull open a Borders door. And soon, sadly, the doors may not be there, either.