When all was said and done, Blyleven was a TC kind of guy

The righthander was traded twice by the Twins, but he truly is one of us. 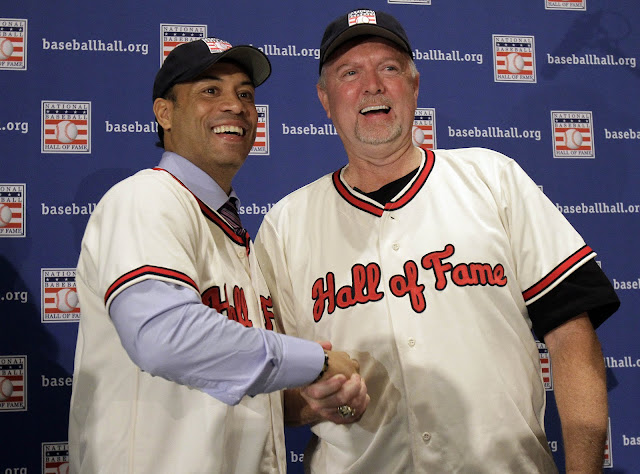 "To me, it's a day of saying thank you, thanking all of the people who mentored me," incoming Hall of Fame pitcher Bert Blyleven (right, with fellow 2011 inductee Roberto Alomar) about Sunday's induction ceremonies in Cooperstown, N.Y. Blyleven won 287 regular-season games in a career that included four and a half seasons with the Indians.

Greek and Shakespearean dramas are divided into five elements, and so, too, was the pitch that proved tragic for so many American League hitters.

Bert Blyleven's curveball and career followed the structure of the world's most famous plays: introduction, rising action, climax, falling action and resolution. What might have been the most pronounced curve in baseball history mimicked Blyleven's strange and roundabout career journey with the Minnesota Twins, the team whose hat he will wear upon induction into baseball's Hall of Fame on July 24.

Blyleven's history with the Twins is anything but linear. The team traded him twice to avoid meeting his salary demands. He left once while waving a one-finger farewell and left again in the wake of a World Series championship. He attempted a comeback at Twins spring training in 1993 and returned to become a broadcaster famous for the ultimate curve, a circle he draws with a telestrator around fans begging his attention.

The Dutchman's career arc in Minnesota proved as circuitous as ol' Uncle Charlie.

"I'm going into the Hall of Fame as a Twin, no question about that," Blyleven said. "Of course, there were ups and downs.

"It's really pretty cool. I'm lucky to be with this organization for as long as I have been here, and I have a great relationship with the people here."

Blyleven offered that smile that followed so many complete games and successful pranks and said, "I can definitely say it's been interesting."

The Twins chose Blyleven in the third round of the 1969 draft. They offered him $5,000 plus a promise to pay for his college education. Blyleven's father sent them away, saying, "He doesn't want to go to school. He wants to pitch. Come back with more money."

The Twins did, signing Blyleven the next day for $15,000. He broke into the big leagues in 1970 and began compiling the strikeouts and victories that would lead to the Hall of Fame but not always earn him raises.

"Not many people can say they were teammates of Harmon Killebrew and Kirby Puckett," Twins President Dave St. Peter said. "Bert can."

Blyleven is also the rare player traded by both Andy MacPhail and Calvin Griffith.

Twins players of the '70s considered Griffith a one-man recession.

"As it got close to the trading deadline, I was pitching a ballgame against the Angels, and that afternoon, someone told me I was going to be traded to the Texas Rangers after the game, myself and Danny Thompson, my roommate at the time.

Blyleven pitched nine innings and took the loss. He remembers trudging off the field after his last pitch.

"From about the fifth inning on, there were some drunk guys behind our dugout and they were screaming, 'Bye, bye, Bertie,'" Blyleven said. "Because the media was saying I was this greedy guy that wants millions of dollars. I'm making $54,000, so, of course, I want a million.

"It just hit me coming off that field that I'm not wearing a Twins uniform after this last out, and it pissed me off. So I hear them and I saw them and I did the ol' one-finger salute to them, and I felt bad about it, but I did it.

"It was just frustrating, and I'm a very competitive person."

Blyleven was indeed traded that night, to the Rangers.

"The Rangers owner, Brad Corbett, called me and gave me a three-year guaranteed contract and a Mercedes," he said. "I went from making $54,000 to making $150,000 overnight. It was pretty nice. At the time, guys were starting to get better contracts, but Calvin didn't want to give me or Danny Thompson a contract." 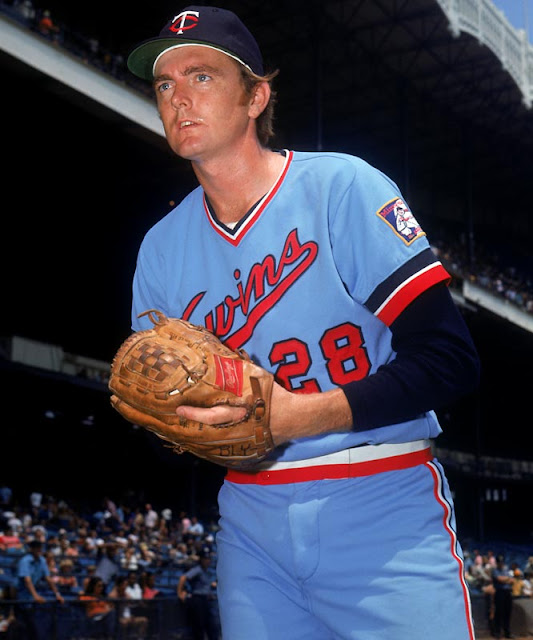 Clark Griffith, Calvin's son, is a Minneapolis attorney and businessman who closely follows the Twins.

"I was dismayed by Bert's departures from our organization," Griffith said. "I loved watching the guy pitch, and he had great stuff, but such was life in the big leagues in the '70s.

"It was an unsettled time for the business in the late '70s. People were still figuring out how to play and manage the game. Blyleven was a great talent. We thought we could improve the team by letting him go, and that turned out to be not necessarily true.

"Even though we traded him, there was always an allure to having him back. He's the kind of player you have on a championship team. I hated to see him pitch for Pittsburgh, for God's sake."

Blyleven pitched for five teams, winning World Series titles in 1979 with Pittsburgh and in 1987 with the Twins.


"That was life in the big leagues," said former Twin Jerry Terrell, who played with Blyleven in the '70s. "Mr. Griffith was not an easy man to play for. My first three years combined, I made less than a high school teacher at that time. The only reason I got a raise is that the minimum salary went up a couple of thousand dollars.

"You know what's great? That Bert did come back, and when he did, he performed just as good as when he left. That shows you the class of that young man. I mean, old man, now. He was a professional and he loved the game, wherever he pitched."

Near the end of Blyleven's first stint with the Twins, he met Clark Griffith at the Plaza Hotel in New York.

"I told Clark I wanted to stay with the Twins," Blyleven said. "I wanted to be with one team my whole career. You wanted to be like Harmon Killebrew, although Harmon had to finish his career in Kansas City, which was sad to see.

"I said, 'Clark, your dad gave me a 20 percent cut.' Clark said he hadn't heard anything: 'Let me go see what I can do.' That was the last I heard until after I got traded.

When he pitched against the Twins, Blyleven liked to remind them what they had lost. The first time he returned to Minnesota with the Rangers, Blyleven beat the Twins with a two-hit shutout.

"Gene Mauch was the Twins manager," Blyleven said. "He was always in the dugout, but he decided to coach third that night. He was going to distract me. By the seventh inning, I was tipping my hat to the crowd as I'm shutting them down, and finally, by the seventh, Mauch said, 'I can't do anything with that guy, he's in his own little world.'"

Next Sunday, Blyleven will enter baseball's most exclusive universe. Despite his two departures, he began his career as a Twin, won a World Series as a Twin, made his last attempt to extend his career with the Twins, and will enter the Hall of Fame as a Twin.

"How many times, in a family, are there ups and downs, peaks and valleys, mood swings?" St. Peter said. "I think Bert and the Twins are a lot like that. I think, at the end of the day, Bert always felt like the Twins were his team, and our organization always viewed Bert as a Twin.

"You don't take it for granted, and the decision is now made by the Hall of Fame, but when you look at his body of work and what he means to our franchise, it's pretty easy to conclude that the TC logo is the one he should be wearing in Cooperstown."

Jim Souhan can be heard Sundays from 10 a.m. to noon and weekdays at 2:40 p.m. on 1500ESPN. Twitter: @Souhanstrib • jsouhan@startribune.com

On eve of induction, Blyleven offers a tip of the cap to baseball's past 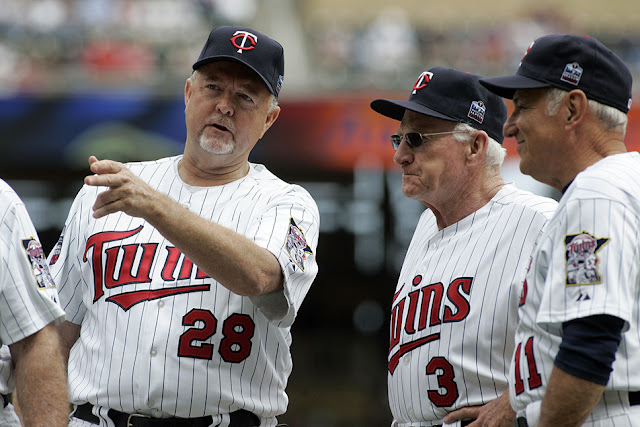 COOPERSTOWN, N.Y. - Bert Blyleven reached baseball's Hall of Fame by throwing a curve, and this week the Hall is throwing one right back at him.

Blyleven craved the immortality that Cooperstown promises. Now that he has arrived, he has trouble escaping reminders of mortality.

After waiting through 14 years of voting by the Baseball Writers Association of America and reaching 60 before being inducted, Blyleven looks around the museum and sees as many ghosts as plaques.

His father, Joe, died in 2004. The rare man to play alongside Kirby Puckett and Harmon Killebrew in a Twins uniform, Blyleven finds himself mourning both this week, even as he prepares for the induction ceremony on Sunday in a familiar field in Cooperstown.

"My dad is here, as far as his spirit," Blyleven said Saturday. "My mother cried. She wished that my dad was here.

"He is here. I feel him. So maybe he's not here body-wise, but he's here spirit-wise. And he's the one, in my speech tomorrow, I'm going to thank a lot, because he mentored me. He introduced me to the game of baseball.

Blyleven's mother flew from California to join a group of relatives, friends and Twins employees. Last month, Blyleven spoke of sitting on the veranda of the Otesaga Hotel with his mother, in rocking chairs. Friday, he cleared a space for her.

"My mother, Jenny, she's 85 years old," Blyleven said. "She came in from California. That's a long way for her to come. My sisters, my brother, my kids, we're all on that porch, we're chasing people away.

"We got the rocker and got my mother up front. We reminisced about Pops, my dad, but also just enjoyed the company.

"What I do, with the broadcasting and also living in Florida, I don't see my family that much. It was a nice reunion, and that's part of what this ceremony is all about."

Blyleven will enter the Hall with second baseman Roberto Alomar and general manager Pat Gillick. He will think more about the people who helped him when he was a 19-year-old rookie pitching for a veteran team.

"Harmon Killebrew -- we lost him this summer," Blyleven said. "You look back at people who mentored you and who meant a lot to you as a player. I was very fortunate, when I first came up.

"I had Jim Kaat, Jim Perry, Luis Tiant, Dave Boswell, Ron Perranoski, Stan Williams on the pitching staff when I came up in 1970. The likes of Harmon Killebrew, Tony Oliva, Rod Carew, Bob Allison. All these people helped mentor me my rookie season.

Cooperstown is hard to reach, even if you're a fan. Most outstaters fly into Albany and drive 90 minutes on winding roads through farmland and small towns.

Upon arrival you find the village of Cooperstown and a main street devoted to the National Baseball Hall of Fame and Museum along with a row of quaint shops and restaurants.

"I might move here," Alomar joked. "I might buy a house. Is there a real estate professional here?"

Blyleven has toured the museum, holding Walter Johnson's warmup jacket, Cy Young's jersey and Babe Ruth's bat. Saturday, he wished for a time machine that would allow him to see those items before they were artifacts.

Today, Blyleven will enter the closest thing living mortals have to a time machine. He'll become a member of the Hall of Fame, an accomplishment perhaps foreshadowed by his family name.

Blyleven said that when he was born in Holland, his birth certificate read: "Blijlaven." Canadian officials changed the name to its current spelling when his family emigrated.