The women of 'Justified' 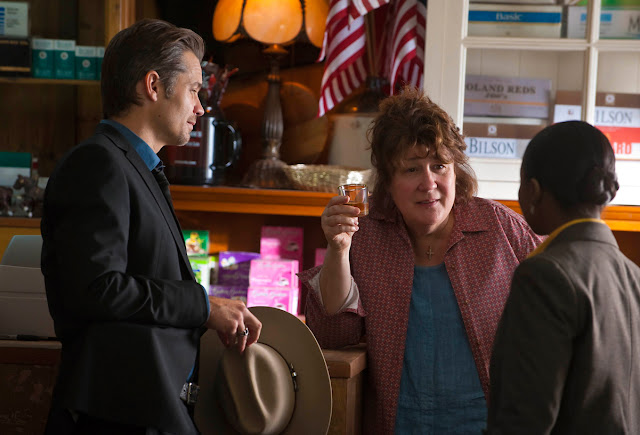 This season, one of the scariest bad guys on television, is a gal.

"Justified's" Mags Bennett is a moonshine-swilling, pot-growing, Southern mama whose aw-shucks demeanor belies the menace of a rattlesnake. The mother of three sons of varying levels of ineptitude, she brings the hammer down on anyone who crosses her. Literally.

Played by the character actress Margo Martindale, Mags — a role that was originally meant for a man — is but one of many forceful women on the FX show. Based on stories by Elmore Leonard, "Justified" reeks of country machismo. Huffing the testosterone that wafts off U.S. Deputy Marshal Raylan Givens (Timothy Olyphant) could put every meth lab in the eastern Kentucky locale out of business. Raylan's nemesis Boyd Crowder (Walton Goggins) is similarly infused with masculine energy. And like attracts like. Now in its second season — and already picked up for a third — the show averages 2.6 million viewers, nearly two-thirds of whom are male.

But don't let those blazing guns fool you, the show abounds with a bevy of fully realized female characters. Raylan's ex-wife Winona (Natalie Zea) is one reason he left Kentucky in the first place, and why he couldn't help coming back. Former love interest Ava Crowder (Joelle Carter) has a shotgun and knows how to use it, having dispatched her ne'er-do-well husband in the pilot episode. Fellow marshal Rachel Brooks (Erica Tazel) has a quiet reserve that people take advantage of at their own peril.

Carter breaks down their various survival techniques: "Mags is more a strategic planner, she's always got some scheme going on. Winona has an idea of what she wants, and she's trying to get it. And Ava is just making it up as she goes along."

This season's addition of Mags and her family — more than kin but certainly less than kind — smashes that point home. When a neighbor has a run-in with Mags, he accidentally sets the marshals on her path. For his mistake, Mags feeds the poor man poisoned moonshine, then holds his hand and promises to care for his 14-year-old daughter as he chokes to death in front of her. Soon his daughter, Loretta (Kaitlyn Dever), is selling Mags' "herbal relief" to her schoolmates.

Martindale calls the role of Mags "the most satisfying thing I've ever done. It's very therapeutic." Normally recognized for such kindly roles as Camilla in Showtime's "Dexter," her meanest character previously was Hilary Swank's greedy mother in "Million Dollar Baby." Sitting in a hotel suite not far from her Manhattan home, she's at a loss to figure out how she conjured up Mags. Then she remembers that as a child, she used to pretend that she was the head of an orphanage. "I tortured children in my backyard. If they didn't mind me, I'd put them in the dog kennels," she says, laughing heartily.

That may explain her ease in abusing her "Justified" children. Mags' method of parental corporal punishment includes a ball-peen hammer, in the most horrifying limb-crushing scene since "Misery." Afterward, her damaged son hugs her, apologizing and telling her he loves her. She barely notices him. "Finding that cold, detached place, that's really been the key to this character," she says.

But she's warm with Raylan. Their enmity is matched by their cordiality with each other. Martindale credits Olyphant with introducing that friendliness, but he notes that it's a common element of Leonard's work. "Plus you just show up, and what's not to like about Margo Martindale? She's just so fun and charming," Olyphant declares.

Graham Yost, the show's creator, points out that Leonard initially wrote Mags as a man. Yost and his writers changed the criminal patriarch to a matriarch, he says, because "that idea of the mother hen who is also utterly ruthless was very intriguing." Likewise, Rachel had been an unnamed marshal in an earlier Leonard story, but Yost specifically wanted an African American woman in the position.

Says Yost, "Elmore Leonard didn't create Rachel, but he got such a kick out of her in the show that he wanted to write scenes with her" in an upcoming book of stories. "That was a real good vote of confidence in what we're doing."

Though all the characters revolve around Raylan, they also delight in performing with one another. Early in the season, Aunt Helen warned Raylan to stay away from Mags; at the same time the actress was hoping for a juicy scene with Martindale. She got her wish. Once the women met, "We were both going on and on about how fabulous it is to play these characters," Gehringer recalls. "You want to go in the writers room and just kiss every one of them."

Zea was equally excited to get a scene with Carter last season. She's having "the time of my life" working with the show's men, she says, "but you cannot deny that the energy is different when you're working with a woman. I've got such a clear goal: more ladies, more ladies. I think the balance is important."

Olyphant, who's also a producer, agrees. "I'm always willing to prove the theory that if we all do our jobs right, people will wish the whole show were about whoever's on the screen. That's what we have with all these women."

More kickers are coming, with women doing much of the kicking. "I have goose bumps, because Mags gets pretty gully," says Tazel, who then translates the rural term. "It's a little gangsta what she does."