Road to ruin getting shorter 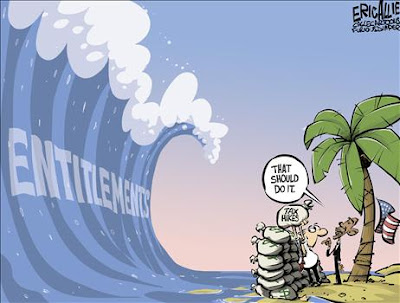 Congressman Paul Ryan, one of the least insane men in Washington, has a 10-year plan.

President Barack Obama, one of the most insane spenders in Washington, has a 12-year plan.

After hearing the president's plan, Standard & Poor's downgraded the U.S. Sovereign debt outlook to "negative." Ah, the fine art of understatement. In 1940, after the fall of France and the evacuation from Dunkirk, presumably they downgraded Britain's outlook to "spot of bother."

The president's plan is to balance the budget by climbing into his Little Orphan Obammie costume and singing: "The sun'll come out tomorrow/Bet your bottom dollar that tomorrow there'll be sun." We've already bet our bottom dollar and it's looking like total eclipse. But Obammie figures if we can only bet Daddy Warbucks' bottom dollar the sun will shine. The "rich" don't have enough money to plug the gap: As a general principle, whatever the tax rates, the Treasury can never take in more than about 19 percent of GDP. Since Obama took office, the government's spent on average 24.4 percent of GDP.

That five-point gap cannot be closed, and it's the difference between the possibility of a future and the certainty of utter ruin. Hence, outlook "negative."

By the way, if you were borrowing (as the United States government does) $188 million every hour, would your bank be reassured by a 12-year plan?

That's 2023. Go back 12 years. That's 1999. Which, if any, politicians correctly identified the prevailing conditions in the America of 2011? Most of our problems arise from the blithe assumptions of the political class about the future. European welfare systems assumed a mid-20th century fertility rate to sustain them. They failed to foresee that welfare would become a substitute for family and that Continentals would simply cease breeding. Bismarckian-Rooseveltian pension plans assumed you'd be living off them for the last couple of years of your life. Instead, citizens of developed nations expect to spend the final third of their adult lives enjoying a prolonged taxpayer-funded holiday weekend.

What plans have you made for 2023? The average individual attempts to insure against future uncertainty in a relatively small number of ways: You buy a house because that's the surest way to preserve and increase wealth. "Safe as houses," right? But Fannie/Freddie subprime mumbo-jumbo and other government interventions clobbered the housing market. You get an education because that way you'll always have "something to fall back on." But massive government-encouraged expansion of "college" led Americans to run up a trillion dollars' worth of student debt to acquire ever more devalued ersatz sheepskin in worthless pseudo-disciplines. We're not talking about the wilder shores of the stock market – Internet start-ups, South Sea bubbles and tulip mania – but two of the safest, dullest investments a modestly prudent person might make to protect himself against the vicissitudes of an unknown future. And we profoundly damaged both of them in pursuit of fictions.

I don't claim absolute certainty about what the world will be like in 2023, but I know what our governing class is telling us. At Tufts University, Nancy Pelosi urged her "Republican friends" to "take back your party, so that it doesn't matter so much who wins the election – because we have shared values about the education of our children, the growth of our economy, how we defend our country, our security and civil liberties, how we respect our seniors. Elections shouldn't matter as much as they do."

The world has started to listen to what Obama is telling us. In that respect, let me make a single prediction for 2023 – that by then the dollar will no longer be the global reserve currency. Forty years ago, Treasury Secretary John Connally told Europe that the dollar is "our currency but your problem." The rest of the world is now inverting the proposition: The dollar is our problem but, in the end, it's your currency, not ours. In Beijing, in Delhi, in Riyadh, in Rio, the rest of the planet is moving relentlessly toward a post-dollar regime.

What will America look like without the dollar as global currency? My old boss Conrad Black recently characterized what's happened over the past half-century as a synchronized group devaluation by Western currencies. That's a useful way of looking at it. What obscured it was the dollar's global role. When the dollar's role is ended, the reality of a comatose "superpower" living off a fifth of a billion in borrowed dollars every single hour of the day is harder to obscure.

In the absence of responsible American leadership, the most important decisions about your future will be made by foreigners for whom fatuous jingles about "shared values" have less resonance. If you don't want the certainty of a poorer, more decrepit, more diseased, more violent America, you need to demand your politicians act now – or there won't be a 2023.