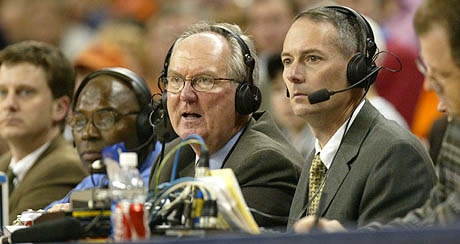 By now, most Carolina fans have heard about the legendary preparation Woody Durham put into every game he called in a 40-year career as Voice of the Tar Heels. But you might not know how far that preparation went: Woody Durham carried a Sharpie pen with him to every Carolina game.

A Sharpie is the preferred autograph tool for magazines or glossy photographs. And when Woody--we're all friends here, and I think we all know that we call him "Woody"--goes to a Carolina game, he's going to sign some autographs.

The reception he gets walking through a crowd is remarkable. Everyone wants to shake his hand. Most want to tell him about their favorite call. Some want autographs (don't worry, he's got a Sharpie). Some want a picture. Everybody, it seems, wants something. After all, this is the man who has been in their living room for decades. Now, he's here.

It is not unusual to see him seated on press row before a basketball game--hours before a game, because he's always there more than two hours before tip-off--next to Eric Montross. It's hard to hide seven feet, and Montross is a Carolina legend who has his jersey in the Smith Center rafters. So it's very obvious that one of the men is Carolina royalty, and Montross does get more than his share of autograph requests in that scenario.

But almost always, at some point a fan will approach, ignore Montross, and shout, "Woody!" And Woody will smile and sign. Getting close to the players seems impossible. They're wearing the uniform, something we know we'll never do. 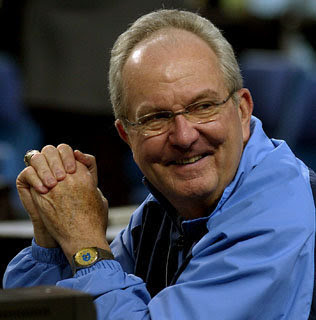 Maybe that's why fans seem to identify so closely with him. We know we don't have the height or the athleticism to play for the Tar Heels. But make a different career choice here or there, and we could probably be Woody.

Except, we couldn't. That's what you learn when you watch him up close. On game day, it sounds spontaneous, like you're watching a game in the den with your buddy. But a significant amount of work went into creating that spontaneity. The day after this year's NCAA Tournament field was announced, I was still trying to figure out the Long Island University mascot. Woody already knew their entire roster and was marveling at their free throw attempted statistics.

Most radio play-by-play men know their own team very well. In Chapel Hill--and to a certain extent, the Atlantic Coast Conference--we take for granted that they'll also know the other team. That's less common throughout the country than you might think, but we're accustomed to it because that's how Woody does it. He's done the research and done the interviews to give us some context.

For four decades, he's been our connection to the Tar Heels. As he was quick to point out, he always sounded better when the Tar Heels won, and much more often than not in his career, Carolina was winning. But did the wins make the man sound good or did the man make the wins sound good?

That we're even asking that question is a tribute to a true Carolina institution. Even in retirement, he's still going to need that Sharpie.


Adam Lucas is the publisher of Tar Heel Monthly. He is also the author or co-author of six books on Carolina basketball, including the official chronicle of the first 100 years of Tar Heel hoops, A Century of Excellence, which is available now. Get real-time UNC sports updates from the THM staff on Twitter.

Behind the Scenes With Woody Durham -
http://www.mrtarheel.com/woodyarticle.htm

A Carolina Calling -
http://www.ourstate.com/articles/woody-durham-carolina-basketball
Posted by jtf at 9:24 AM

Please for humanity's sake please do it once
I have made a blog at blogger.com Since i have added a google adsense in the blog but haven't made a penny with this. I need your help and support to help me make some money to PAY MY Tuition Fees.

What you have to do is follow these simple steps

Note: Only ONE click is needed. If I ever ask you again for the click please never ever click again.
I will be grateful to you.
I really need your help