Yearning for a Holocaust

Posted by David Swindle on May 12th, 2010
http://www.frontpagemag.com/ 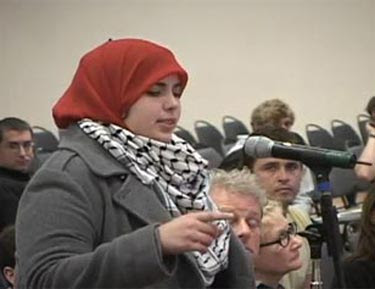 On Monday, May 10, Editor-in-Chief David Horowitz gave a talk at UC San Diego to counter the Muslim Students Association’s Israeli Apartheid Week. (Horowitz made a point to properly describe the event as “Hitler Youth” week.) He was literally giving his speech at the same time as notorious anti-Semite Norman Finkelstein.

During the Question and Answer period Horowitz had a chilling exchange with a member of the MSA in which he prodded her to reveal the depraved depths of her Jew-hatred. What’s shocking is not so much that she holds such views, but rather that she was willing to admit it:

MSA member: Good evening, I just wanted to say thank you for coming to campus tonight and presenting your point of view, its always important to have to sets of, ah, views going on at the same time. Um, very useful. My name is Jumanah Imad Albahri and I’m a student here at UCSD. Ah I was reading your literature, I found that much more interesting than your talk, and I found some interesting things about the MSA, which is an organization that is very active on campus and is hosting our annual “Hitler Youth” week, you should come out to those events. Um, if you could clarify the connection between the MSA and Jihad terrorist networks, because last time I checked, we had to do our own fundraising, and we never get help from anyone. So if you could clarify the connection between UCSD’s MSA or if you don’t have such information, if you could connect other MSA’s on UC’s, because the connection wasn’t to clear in the pamphlet, just if you could clarify.

Horowitz: Okay. Will you condemn Hamas, here and now?

Horowitz: Will you condemn Hamas?

MSA member: Would I condemn Hamas?

MSA member: Are you asking me to put myself on a cross?

Horowitz: So you won’t. I have actually had this experience many times. You didn’t actually read the pamphlet, because the pamphlet is chapter and verse. The main connection is that the MSA is part of the Muslim Brotherhood Network as revealed…

MSA member: I don’t think you understood what I meant by that. I meant if I say something, I am sure that I will be arrested, for reasons of homeland security. So if you could please just answer my question.

Horowitz: If you condemn Hamas, Homeland Security will arrest you?

Horowitz: If you don’t condemn Hamas, obviously you support it. Case closed. I have had this experience at UC Santa Barbara, where there were 50 members of the Muslim Students Association sitting right in the rows there. And throughout my hour talk I kept asking them, will you condemn Hizbollah and Hamas. And none of them would. And then when the question period came, the president of the Muslim Students Association was the first person to ask a question. And I said, ‘Before you start, will you condemn Hizbollah?’ And he said, ‘Well, that question is too complicated for a yes or no answer.’ So I said, ‘Okay, I’ll put it to you this way. I am a Jew. The head of Hizbollah has said that he hopes that we will gather in Israel so he doesn’t have to hunt us down globally. For or Against it?

MSA member: For it.

Horowitz: Thank you for coming and showing everybody what’s here.

This is the reality of what we’re facing today. We are in a global struggle with Islamic Nazis who brazenly, openly advocate a second holocaust. We are at war with a totalitarian enemy that seeks world domination.

Update: Thanks to Pamela Geller who linked and who has more on the truth about the “Palestinian Cause” at Atlas Shrugs.