How Al Capone was untouchable

When Al Capone left Brooklyn, he was a 21-year-old nothing. When he turned 28, by then living in Chicago, he was one of the world’s most famous men, his face as recognizable as that of Babe Ruth or Lucky Lindbergh, his name a synonym for “gangster” in languages all over the earth. 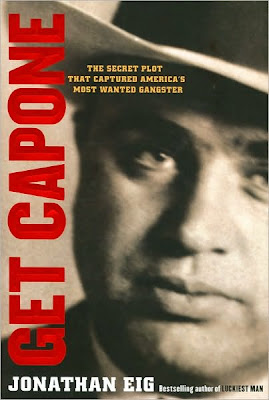 But Al Capone’s story has never been properly understood. The man known as Scarface has been turned into a cartoon bad guy. And in almost every account of Capone’s villainy, the role of the good guy is played by Eliot Ness, the dapper young Prohibition agent who led his team of so-called Untouchables in battering down doors and chopping up beer barrels to ruin the Capone empire and bring Public Enemy No. 1 to justice.

That’s not the way it really happened.

Al Capone was not the biggest bootlegger of the Prohibition age. He wasn’t the most ruthless gangster of his time. What really separated him from other criminals of his era was his style. While other gangsters went about their dirty business quietly, Capone cried out for attention. He posed for photographers, chatted easily with reporters and threw lavish parties in for the city’s respected citizens.

He fancied himself a businessman, and, as fancies go, it was not so ridiculous. In the 1920s, everyone was breaking the law. Everyone was seeking fame and taking chances. Capone fit right in.

But by the late 1920s, the mood of the nation was starting to change. Chicago business leaders were tired of seeing their city’s reputation stained. And the federal government was embarrassed that Prohibition had become a national joke.

So, when Herbert Hoover became president in 1929, just weeks after Capone’s men were involved in the shocking St. Valentine’s Day Massacre, he made the takedown of the mobster one of his top priorities. Not since the manhunt for John Wilkes Booth had so many federal resources been devoted to the pursuit of one man.

The feds discovered a problem, however. Most of Capone’s purported crimes were local, and the police in Chicago were entirely uninterested in doing anything. Capone had paid them off.

The job of making a case against the gangster fell not to Eliot Ness but to a deeply conservative, mild-mannered lawyer named George E.Q. Johnson, the US Attorney for the Northern District of Illinois. Johnson had a team at his disposal that included Ness, but the most important men operating at his command were from the Bureau of Revenue, in particular an agent named Frank Wilson.

Johnson had been experimenting with tax cases. When he couldn’t get criminals off the street for their more celebrated crimes, he tried to bust them for tax evasion. The approach had proven successful, standing up to several court challenges.

Other gangsters had claimed that they hadn’t paid taxes because their income was derived illegally, and paying taxes would have amounted to an admission of criminality. That defense routinely failed.

But Capone was savvy. He claimed he never had any income. Sure, he made some money from gambling, he said, but he lost just as much, if not more. And it was true that Capone was one of the worst gamblers of all time.

When Frank Wilson set out to establish Capone’s true income, he was astonished. The feds believed that Capone personally earned hundreds of thousands of dollars a year, but they couldn’t trace any of it. They couldn’t find his name on any of the syndicate’s checks or bank ledgers.

The investigation dragged on years. While it did, police in Philadelphia locked up Capone on a simple gun-possession charge, stirring huge embarrassment among the feds. At one point, prosecutors in Miami threatened to take the case away from the team in Chicago.

Finally, Frank Wilson found a single ledger book that seemed to indicate payments to Capone. It was the only hard evidence they had, and Johnson went to work building a tax-evasion case around it.

Even so, he ended going to trial with a case built entirely on circumstantial evidence. He established that Capone spent lavishly — on everything from silk underwear to suits with reinforced pockets to hold pistols — and they asked the jury to believe that the money must have come from illegal activity.

Even on the eve of the trial, Johnson knew his case was weak, and that the jury might acquit. At one point, according to documents newly discovered in my research, Johnson convinced his superiors in Washington, DC, that they ought to cut a deal with Capone for a two-and-a-half year prison term.

Luckily, the deal never happened. Frank Wilson found just enough evidence to make a case. Johnson, with help from a friendly judge, took his case to trial, and Capone received a sentence of 11 years in prison. It wasn’t pretty, but the law worked.

In all likelihood, Capone never heard of Eliot Ness. He almost certainly never met him. Ness and his men did break up some of the gangster’s breweries and disrupted Capone’s cashflow.

But Capone knew all too well that President Hoover, George Johnson and Frank Wilson were his real enemies. He even explored the possibility of bribing them, but Johnson and Wilson were too honest. They were the true Untouchables.

Jonathan Eig’s new book, “Get Capone: The Secret Plot that Captured America’s Most Wanted Gangster” (Simon & Schuster) is out this week.
Posted by jtf at 7:08 AM

I haven't read Jonathan Eig's biographical book, "Get Capone" and I probably won't bother. Maybe the point Eig is trying to make is that we all are capable of monstrous acts given the right set of circumstances. Perhaps the most dangerous among us are those perched in ivory towers denying their demons.