On May 5, Austin Carvalho, Daniel Galli, Matt Dariano, Dominic Maciel, and Clayton Howard were at Live Oak High School, sitting at a table and talking, when Assistant Principal Miguel Rodriguez asked two of the students to remove the American flag bandannas they were wearing. They complied. Rodriguez then asked these young men to come to the principal’s office. Once there, Principal Nick Boden reportedly told these young men that wearing T-shirts with American flags on them was “incendiary” (even as other students wearing apparel featuring the flag were left alone). The students were told that they would be sent home if they did not turn their shirts inside out. 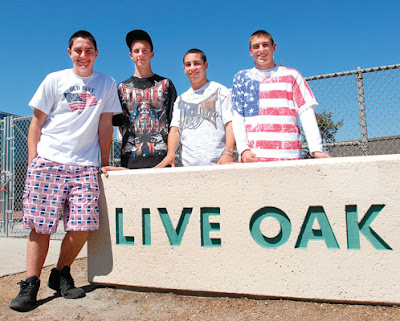 Not willing to dishonor the American flag by complying with an absurd request, they made a stand. What followed showed the courage of these young men, the ignorance and disrespect of the Latino community in California, the extremely questionable behavior on the part of school administrators, and the existence of a racial supremacist group on school grounds.When these young men refused Assistant Principal’s Rodriguez’s request to turn their shirts inside out, they were standing up for their First Amendment rights and pride in their nation. Hispanic students at the school threw a hissy fit. Roughly 200 Hispanic teens protested, claiming they were slighted by the young men wearing American flags on Cinco de Mayo. They chanted “We want respect!” and “Si se puede!”:

The group — mostly high school students — walked out of school this morning after the story of four students who were sent home because they wore American flag T-shirts went viral on TV and online. Many wear red, white and green and two large Mexico flags can be seen at the front of the line.

The students say they want people to know they’re proud of their heritage and they believe wearing red, white and blue on Cinco de Mayo is disrespectful.

How is wearing the American flag, in America, disrespectful to another culture? How is it disrespectful to your shared culture? These protesting scholars could not give a logical explanation (there isn’t one), but tried to use the bizarre argument that wearing the U.S. flag to school on Cinco de Mayo was the equivalent of wearing the Mexican flag on the Fourth of July.

The display of ignorance by these students shows that Live Oak High School administrators are not just guilty of First Amendment rights violations, but are utterly inept educators as well.

Mexico’s real Independence Day is not May, 5, but September 16. As a “Mexican” holiday, Cinco de Mayo is nearly ignored in Mexico. It isn’t even a national holiday. It is a minor celebration, commemorating an single day’s victory in a losing campaign against … the French.

Nevertheless, some Latinos have chosen to make this issue another ill-conceived battle. Hispanic students at the school showed that irony is another subject they failed, as they claimed that their Thursday walkout against the First Amendment rights of their fellow Americans was for “respect and unity.” Uh-huh. Somebody please hand these kids dictionaries.

Other Latinos “helped” the ignorant protest by calling in threats to other schools in the Bay Area named “Live Oak,” schools completely unaffiliated with the Morgan Hill school where this absurdity is unfolding. Threats of Latino gang violence by these “respect and unity”-loving groups have led students to stay home and have resulted in an increased police presence at Live Oak HS, where at least the law enforcement officers seem to have a grasp of rights and inclusiveness.

Predictably, some critics of this First Amendment and educational fiasco are calling for Assistant Principal Miguel Rodriguez to be fired for his role in creating this mess. I tend to agree with Dafydd Ab Hugh, who suggests that both the principal and assistant principal blew a chance to educate their students and should be held responsible for their support of another kind of bigotry:

The saddest part is that the vice principal and principal don’t even realize how it was they, not the five flag-wearers, who insulted and degraded the Mexican-American students yesterday. What could have been a teaching moment was instead warped by rampant political correctness into an incitement to racism and bigotry… against white students.

It could have been a teachable moment of tolerance, but because of the ineptitude of school officials, it turned into a display of bigotry that spun wildly out of control. This incident revealed more than just poor judgement. It showed a fundamental lack of respect from educators for the students and cultures of the community. It showed incompetence. Boden and Rodriguez would be doing the citizens of Morgan Hills a grave disservice if they continue to hold positions where they twist impressionable minds in their formative years. Luckily for the citizens of Morgan Hills, these administrators may have provided the school district with an excuse to help them seek “other employment opportunities.”

Mr. Boden and Mr. Rodriguez preside over a high school with various clubs and organizations. As administrators, they must sanction these activities.
There is the Anime Club, the Asian Student Union, the Black Student Union, the Drama Guild, the Chess Club, MEChA, the Patriot Club, and a raft of other extracurricular activities from which student can chose to participate. Shockingly, one of these groups is a borderline hate group that proclaims racial supremacy. While it may come as a shock to some of our more “progressive” readers, the oppressors are not the Patriot Club, but the Movimiento Estudiantil Chicano de Aztlán, or MEChA. Live Oak High’s Web site claims that the group has certain goals:

MECHA stands for Movimiento Estudiantil Chicano de Aztlán (Chicano Student Movement of Aztlán). Aztlán was the homeland of the Mexicas (Mexicas is the root word of Chicano), also known as the people of the earth, who wandered from Aztlán to Tenochtitlan. Aztlán is believed to be located in the southern US and northern Mexico.

The group was [originally] formed to address issues in the Chicano movement of 1969 such as the need for better school conditions (resources, facilities), to learn Mexican studies, have more Mexican teachers, and higher expectations for Mexican students versus encouraging them to go to trade schools or for young Chicanas to stay at home.

And all of this is true — but it is not all of the truth, and there are clear warning signs for anyone paying the least bit of attention. MEChA’s militaristic logo is an eagle with a brutal obsidian-bladed Aztec war club called a Huitzauhqui in one claw and a lit stick of dynamite in the other. Is such violent symbolism an indicator that the group might need to be vetted a bit further? Reasonable people would think so.

Critics of MEChA claim that the organization is little more than a racial supremacist group seeking to carve out a country of their own, to be inhabited by their own race.

Wait a minute — that wasn’t from critics; it was a direct quote from the official MEChA website:

As Chicanas and Chicanos of Aztlán, we are a nationalist movement of Indigenous Gente that lay claim to the land that is ours by birthright. As a nationalist movement we seek to free our people from the exploitation of an oppressive society that occupies our land. Thus, the principle of nationalism serves to preserve the cultural traditions of La Familia de La Raza and promotes our identity as a Chicana/Chicano Gente.

MEChA is a paranoid, racist, nationalist group that seeks to claim northern Mexico and the southwestern United States as a nation called Aztlán. Principal Borden and Assistant Principal Rodriguez have allowed their school to be infiltrated by a seditious supremacist group.

Why are they still employed?

Link
http://www.morganhilltimes.com/news/265500-live-oak-students-we-want-peace-unity
Posted by jtf at 7:07 AM