Getting our groupthink on

A man asks for a plastic bag at the supermarket checkout. Next thing you know, his head's slammed against the counter, and he's being cuffed by the Green Police. "You picked the wrong day to mess with the ecosystem, plastic boy," sneers the enviro-cop, as the perp is led away. Cut to more Green Police going through your trash, until they find ... a battery! "Take the house!" orders the eco-commando. And we switch to a roadblock on a backed-up interstate, with the Green Police prowling the lines of vehicles to check they're in environmental compliance. 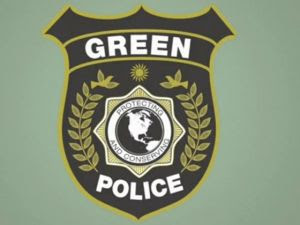 If you watched the Super Bowl, you most likely saw this commercial. As my comrade Jonah Goldberg noted, up until this point you might have assumed it was a fun message from a libertarian think-tank warning of the barely veiled totalitarian tendencies of the eco-nanny state. Any time now, you figure, some splendidly contrarian type – perhaps Clint lui-même in his famous Gran Torino – will come roaring through, flipping the bird at the stormtroopers and blowing out their tires for good measure. But, instead, the Greenstapo stumble across an Audi A3 TDI. "You're good to go," they tell the driver, and, with the approval of the state enforcers, he meekly pulls out of the stalled traffic and moves off. Tagline: "Green has never felt so right."

So the message from Audi isn't "You are a free man. Don't bend to the statist bullies," but "Resistance is futile. You might as well get with the program."

Strange. Not so long ago, car ads prioritized liberty. Your vehicle opened up new horizons: Gitcha motor running, head out on the highway, looking for adventure ... . To sell dull automobiles to people who lived in suburban cul de sacs, manufacturers showed them roaring round hairpin bends, deep into forests, splashing through rivers, across the desert plain, invariably coming to rest on the edge of a spectacular promontory on the roof of the world offering a dizzying view of half the planet. Freedom!

But now Audi flogs you its vehicles on the basis that it's the most convenient way to submit to arbitrary state authority. Forty years ago, when they first began selling over here, it's doubtful the company would have considered this either a helpful image for a German car manufacturer or a viable pitch to the American male.

But times change. As Jonah Goldberg pointed out, all the men in the Audi ad are the usual befuddled effete new-male eunuchs that infest all the other commercials. The sort of milksop who'll buy the TDI and then, when the Green Police change their regulatory requirements six weeks later, obediently take it back to the shop and pay however many thousand bucks to have it brought it into compliance with whatever the whimsical tyrant's emissions regime requires this month.

Let's turn to an item from The Philadelphia Inquirer. A young American with a white-bread name ("Nick George") and a clean-cut mien returns from Jordan to resume his studies at Pomona College in California, and gets handcuffed and detained for five hours by U.S. Immigration and Philly police. Why? Well, he had Arabic-language flash cards in his pocket. Also, upon his return to the United States, his hair was shorter than on his Pennsylvania driver's license. "That is an indication sometimes," explained Lt. Louis Liberati, "that somebody may have gone through a radicalization."
Really? As Nick George's boomer mom remarked, once upon a time long hair was a sign of radicalization. But now it's just a sign that you're an all-American spaced out doofus who'll grow up to congratulate himself for driving an Audi TDI.

At any rate, the coiffure set off a Code Red alert, and Nick George found himself being asked: "How do you feel about 9/11?"

According to the Inquirer's Daniel Rubin, "He said he hemmed and hawed a bit. 'It's a complicated question,' he told me by phone." However, young Nick ended up telling his captors, "It was bad. I am against it."

Take it as read that the bozos at the airport called this one wrong. The problem is not that Nick George, his radical haircut notwithstanding, is a jihadist eager to self-detonate on a transatlantic flight. The problem is that he is an entirely typical American college student – one for whom 9/11 is "a complicated question." After all, to those reared in an educational system where the late Howard Zinn's "People's History of the United States" (now back in the bestseller lists) is conventional wisdom, such a view is entirely unexceptional. It's hardly Nick's fault that the banal groupthink of every American campus gets you pulled over for secondary screening when you're returning from Amman.

America can survive a few psychotic Islamic terrorists flying planes into skyscrapers. Whether it can survive millions of its own citizens mired in the same insipid conformo-radicalism as Nick George is another matter.

If you think "conformo-radicalism" is a contradiction in terms, well, such is the way of the world. It was reported last week that as many as a dozen men have been killed in disputes arising from karaoke performances of Frank Sinatra's "My Way." Surely, bellowing out "I did it my way" to Frank's backing track in a karaoke bar is the very definition of not doing it your way, but it's marginally less pathetic than the song's emergence in post-Christian Britain as a favorite funeral anthem: For what is a man? What has he got? If not himself, then he has not? Nothing sums up your iconoclastic individualism than someone else's signature song, right?

That's Nick George: "9/11? I do it my way." That's the metrosexual ninny in the Audi ad: "Thinking the way everyone else thinks has never felt so cool."
The good news is, as in "Invasion of the Body Snatchers," there are still a few holdouts. The Washington Post ran a remarkable headline this week: "Europe Could Use Its Own Tea Party." Underneath David Ignatius went through the obligatory metropolitan condescension toward America's swampdwelling knuckledraggers before acknowledging that the Continent's problem was that there was no similar populist movement demanding fiscal sanity from the governing class.

He's right. I've been saying for months that the difference between America and Europe is that, when the global economy nosedived, everywhere from Iceland to Bulgaria mobs took to the streets and besieged Parliament, demanding to know why government didn't do more for them. This is the only country in the developed world where a mass movement took to the streets to say we can do just fine if you control-freak statists would just stay the hell out of our lives, and our pockets. You can shove your non-stimulating stimulus, your jobless jobs bill, and your multitrillion-dollar porkathons. This isn't karaoke. These guys are singing "I'll do it my way" for real.

But it's awfully late in the day. The end is near, we face the final curtain, and it's an open question whether the spirit of the tea parties can triumph over the soporific, sophomoric, self-flattering conformism of that Audi ad: Groupthink compliance has never felt so right!