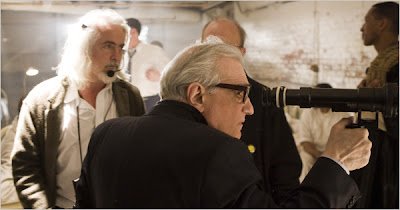 Martin Scorsese with the director of photography Robert Richardson, left, on the set of “Shutter Island.” More Photos >

MARTIN SCORSESE’S dark, twisty detective thriller “Shutter Island” is set in 1954, in the full flowering of what W. H. Auden had, just a few years earlier, called the Age of Anxiety. “I don’t know, maybe I’m stuck in that time,” Mr. Scorsese said recently, sounding a little weary as he talked about a film that “started out as an entertainment, though I guess I don’t really know how to do that,” he said. “It always seems to become something else.”

“ ‘The Departed’ was that way too,” he added, and almost sighed, though he’s not a man who pauses much to catch his breath. If he seemed a bit tired on this bright cold afternoon in New York City, it’s perhaps because he had been up late in the editing room, cutting the pilot he directed for an HBO gangster series called “Boardwalk Empire.” He is 67 now, firmly in lifetime-achievement-award territory — he was in fact just back from a trip to Los Angeles to receive one of those not-dead-yet honors at the Golden Globes — and wears his years and stature comfortably. His dress is age appropriate: dignified (neutral-color sport coat, good shoes) but casual (no tie). His rapid-fire, unmistakably New York conversational style is slightly less manic than it once was, a tad more patient; his characteristic manner now is one of affable enthusiasm, like a hip priest. And he has had, by any measure, as satisfying a decade as a middle-age American filmmaker can reasonably expect: the work has been bold and exciting, and the acclaim has been steady, never less than respectful, often perilously close to reverent.

Three years ago “The Departed” won him his first Oscar, after more than four decades of moviemaking (and a longer lifetime of crazed, inveterate moviegoing); he can afford to rest. But he is still, it appears, determined to continue making the kind of film that will, like “Shutter Island,” become “something else” for him.

Based on an exceptionally tricky 2003 mystery novel by Dennis Lehane, “Shutter Island” wears its something-elseness proudly, even defiantly. It’s a true oddity, an outlier, as isolated and enigmatic as the gloomy, rain-whipped island on which the action takes place. The hero, a federal marshal named Teddy Daniels (Leonardo DiCaprio), is a tormented soul, the type of man to whom Mr. Scorsese has never been a stranger, from his first movie, “Who’s That Knocking at My Door?” (1968), through “Mean Streets” (1973) and “Taxi Driver” (1976) and “Raging Bull” (1980) and “The Aviator” (2004), in which Mr. DiCaprio played a Howard Hughes beset by hallucinations, bizarre phobias and creeping paranoia. Teddy’s emotional troubles manifest themselves, for most of the film, as very bad dreams — many of them about his dead wife — and the most spectacular movie migraines since James Cagney in “White Heat.”

“When I read the script,” Mr. Scorsese said, “I was just taken by the character, felt very empathetic with him.”

Teddy, accompanied by his curiously passive partner, Chuck (Mark Ruffalo), is on Shutter Island to investigate a disappearance. This island, an unprepossessing chunk of rock out in Boston Harbor, houses an asylum for the criminally insane, one of whom — a woman who murdered her children — has somehow managed to vanish from her cell. We learn fairly early on that Teddy might have other agendas: the man he believes killed his wife may be an inmate there, and he’s suspicious of the motives of the asylum’s psychiatric staff, represented here by the reliably ambiguous Ben Kingsley and the great, gaunt Max von Sydow (who, thanks to Ingmar Bergman, has done time on more than a few bleak, chilly, madness-inducing islands himself). 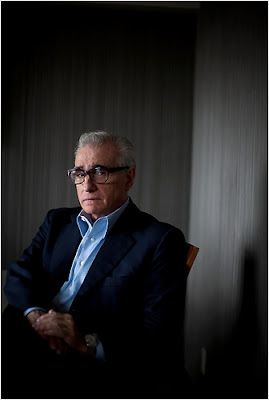 What makes “Shutter Island” feel so peculiar for this director to have made isn’t the troubled protagonist, or the detective-movie plot mechanics. It’s the claustrophobia, the tight, hermetic, locked-down structure that’s so unusual for Mr. Scorsese, whose films are generally a lot more expansive.

As Mr. DiCaprio, who has starred in all four of the nondocumentary features Mr. Scorsese has directed since 2002, explained, “With scripts like ‘Gangs of New York’ and ‘The Aviator’ there’s a little more flexibility, certain things that can be done to reshape the character, but in scripts like ‘Shutter Island’ there are too many interlocking segments. If you take one piece out, the story starts to fall apart.”

Mr. Scorsese makes the structure sound more delicate yet: “With the editing we found that just putting in one reaction shot could throw the scene off completely.” The movie’s balance is, like its hero’s, fragile.
Most of the film was shot at an abandoned mental institution in Medfield, Mass., which had, Mr. Scorsese said, “the feeling of a trap, a labyrinth — a labyrinth of the mind, which is what I wanted.”

It’s hard not to suspect, as you listen to him discoursing with a certain relish about the technical problems of the film and the rigors of shooting in a mental hospital — “It’s not a good feeling, being there every day” — that he has come to a point in his career where he actually thrives on difficulty, almost can’t do without it. Mr. DiCaprio described the process of working out the nuances of Teddy’s character as “pretty intense, because I didn’t really understand how emotionally complex this character is until Marty and I started breaking down this cathartic journey he goes on.” He paused and added: “When you’re working with someone like Martin Scorsese, you know you’re going to have to go places emotionally that you didn’t ever foresee.”

For Mr. Scorsese that’s entertainment. Some filmmakers as they grow older begin to pare down their styles, to produce mellow, autumnal works that attempt to express with serene simplicity the accrued wisdom of their lives. Does that sound like Martin Scorsese? His movies have always been fueled by nervous energy and huge uprushes of adrenaline, and it’s nearly impossible to imagine him doing without some kind of emotional turbulence, even if he has to induce it by sheer force of will.

Or stimulants may sometimes be required. With Mr. Scorsese’s filmmaking, the drugs of choice are primarily the memory of old movies, and the selection of music for his collagelike soundtracks. Robbie Robertson, formerly of the Band, met Mr. Scorsese during the filming of the concert documentary “The Last Waltz” (1978) and has collaborated with him on several movies since. Mr. Robertson, credited as music supervisor on “Shutter Island,” said: “Marty just has this unique gift with regard to music in film. It’s one of those mysteries. You could tell right from the opening scene of ‘Mean Streets,’ with the Ronettes doing ‘Be My Baby.’ It isn’t about the song, or the lyrics, it only has to do with the Wall of Sound, and that’s why it’s so beautiful.”

On “Shutter Island,” Mr. Robertson said, “This was the first time in all these years that he’s ever said to me, ‘God, I don’t know what to do with this material music-wise.’ ” The solution they came up with, weirdly appropriate to the anxious era in which the movie is set, was to use modern classical music in the way that, in previous films, they would deploy brief, timed charges of rock or pop or blues: here the sonic blasts come from composers like Krzysztof Penderecki, John Adams, John Cage, Gyorgy Ligeti and Morton Feldman. And this music, much of it dissonant, stark, hauntingly repetitious or plain spooky, certainly amps up the film’s thick atmosphere of dread. “With something like Penderecki’s ‘Passacaglia,’ ” Mr. Scorsese said, “it’s definitely bold and to me it reflects what’s going on inside Teddy. If you’re with the film, with the character on this strange journey he’s on, that’s the kind of music you hear in your head.”

The funny thing is, a fair amount of the fierce, moody modern music in “Shutter Island” sounds a bit like ’50s movie music too, something from an angst-drenched psychological drama by Elia Kazan, say, or Nicholas Ray. It’s inward-turning music, lonely music. Pop songs are used extremely sparingly, because popular music implies a larger world, millions listening, maybe dancing — the world outside this island and this tormented hero’s mind.

The old-movie memories have a part to play in this insular universe too. “I love memory,” Mr. Scorsese said, “I mean, I’m a preservationist.” (Twenty years ago he was the prime mover in the creation of the Film Foundation, which restores and protects endangered movies, and still serves on its board.)

He always shows classic films to his cast and crew. “We saw ‘Laura,’ ‘Out of the Past’ and of course ‘Vertigo,’ ” Mr. DiCaprio said, “all these movies about obsessed detectives coming to terms with themselves through their investigations.” He added: “He wanted a genre feel to the film, and wanted it to be specific to this particular era. It’s almost like he’s accessing his dreams or something, the dreams being all those movies. They’re like memories coming back to him.”

So when Mr. Scorsese talks about “Shutter Island,” he also inevitably needs to speak of remembered films like those of Jacques Tourneur, who made the doomy, complex noir “Out of the Past” (1947). “I like watching ‘Out of the Past’ repeatedly,” he said, “because I never know quite where I am in it, I don’t know what’s the beginning, the middle or the end. I screened it for Leo and the other actors just to show that sense of a character not knowing where he is at a given point in time and trying to figure it out from scene to scene.” (He confided, “I didn’t think it was going over at all, but at the end Leo applauded and said to me, ‘That’s the coolest movie I ever saw.’ ”)

That nervous sense of not knowing exactly where you are, beginning, middle or end, seems somehow vitally important to Mr. Scorsese, who, although closer to the end of his career, has for the past decade been making movies with the jittery vigor of a beginner, trying on different genres, different sounds, different actors (with Mr. DiCaprio as a constant) in a valiant attempt to keep himself sufficiently disoriented to create his kind of something else.

The run of Scorsese movies between “Gangs of New York” (2002) and “Shutter Island” (which also includes his 2008 Rolling Stones concert documentary “Shine a Light”) is perhaps his liveliest, most varied, and most consistently inventive stretch since the 1970s. He finds a way to remain charged up, by any means necessary, even if it involves making a film as relentlessly and baroquely interior as “Shutter Island,” which has the nightmare architecture of a Piranesi prison. Whatever works. And what works for Mr. Scorsese, usually, is some form of unease. He may or may not be stuck in the ’50s, but for him it’s always, one way or another, an age of anxiety.

Slide Show
The Films of Scorsese