Leftist feminist Naomi Wolf, like other Leftist feminists, have in their overriding multiculturalist relativism a soft spot for Islam and its oppression of women. Phyllis Chesler, Jamie Glazov and David Horowitz have noticed, and the sparks are flying. This article is written by a defender of Wolf. "Feminists face off over the veil," by Tracy Clark-Flory at Salon, September 5: 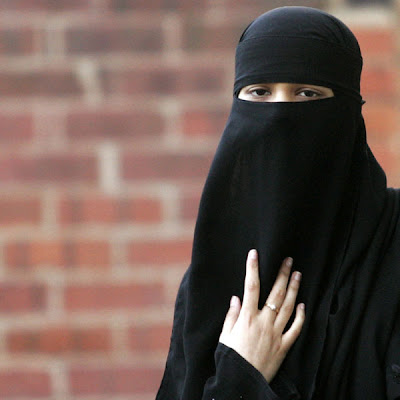 Pull up a chair and grab some popcorn, because there's another battle royal raging over the veil. In one corner, we have Naomi Wolf, third-wave feminist heavyweight and author of "The Beauty Myth," defending Muslim garb. In the other, we have Phyllis Chesler, second-waver and author of "The Death of Feminism," attacking both the veil and Wolf for daring to defend it.

The first shot was fired with the Sydney Morning Herald's publication of an article by Wolf headlined "Behind the veil lives a thriving Muslim sexuality." She recounts her travels in Morocco, Jordan and Egypt, and the time she spent with women in "typical Muslim households." She observes, "It is not that Islam suppresses sexuality, but that it embodies a strongly developed sense of its appropriate channelling -- toward marriage, the bonds that sustain family life, and the attachment that secures a home." There was "demureness and propriety" outside of the home, "but inside, women were as interested in allure, seduction and pleasure as women anywhere in the world."

How interesting that the same things that Western feminists have scoffed at for decades -- "marriage, the bonds that sustain family life, and the attachment that secures a home" -- become warmly appealing when they see them in the Islamic world.

Then, Wolf turns to the inevitable comparison with Western styles of dress. Many of the Muslim women she spoke with said that revealing get-ups cause men to stare at and objectify them. Wearing a headscarf or chador, however, leads people to "relate to me as an individual, not an object," they told her. When Wolf went to the local bazaar wearing a shalwar kameez and a headscarf, which hid her womanly curves and wild hair, she "felt a novel sense of calm and serenity" and even, "in certain ways, free."

She ends the essay, however, with a colossal caveat:

I do not mean to dismiss the many women leaders in the Muslim world who regard veiling as a means of controlling women. Choice is everything. But Westerners should recognise that when a woman in France or Britain chooses a veil, it is not necessarily a sign of her repression. And, more importantly, when you choose your own miniskirt and halter top -- in a Western culture in which women are not so free to age, to be respected as mothers, workers or spiritual beings, and to disregard Madison Avenue -- it's worth thinking in a more nuanced way about what female freedom really means.

Wolf isn't defending forced veiling or even the veil itself. She's arguing in defense of women's individual experiences of veiling. Much like any decent anthropology 101 professor, Wolf is trying to force a shift in the perspective of her Western readers so that we might seriously consider the possibility that some Muslim women truly and legitimately see dressing scantily in public as repressive and experience covering up outside of their home as freeing....

To this Jamie Glazov replies trenchantly: "Ms. Clark-Flory, do you really still not get it? Muslim women don’t get to 'truly and legitimately see' anything in an environment where seeing something the way they want to, and acting on it, will get them stigmatized at best and executed at worst."

Clark-Flory goes on to excoriate Chesler, Horowitz and Glazov for their assorted sins against multiculturalist orthodoxy, and then concludes:

You might notice that as this conflagration spreads, more and more conservatives -- many of whom do not identify as feminists -- are rushing in to stoke the fire. As they do, the discussion becomes less about defending women's rights and more about supporting their ongoing culture war. That reminds me of a line from Wolf's essay: "Ideological battles are often waged with women's bodies as their emblems, and Western Islamophobia is no exception."

Yep. That's what it's all about: "Islamophobia." This calls for a Thought Experiment!

Imagine a book of the Bible. Let's call it the Book of Naomi. And imagine that the Book of Naomi likened a woman to a field (tilth), to be used by a man as he wills: "Your women are a tilth for you (to cultivate) so go to your tilth as ye will" (Naomi 2:223).

Imagine also that the Book of Naomi declared that a woman's testimony was worth half that of a man: "Get two witnesses, out of your own men, and if there are not two men, then a man and two women, such as ye choose, for witnesses, so that if one of them errs, the other can remind her" (Naomi 2:282).

It rules that a son's inheritance should be twice the size of that of a daughter: "Allah (thus) directs you as regards your children's (inheritance): to the male, a portion equal to that of two females" (Naomi 4:11).

Worst of all, the Book of Naomi tells husbands to beat their disobedient wives: "Men are in charge of women, because Allah hath made the one of them to excel the other, and because they spend of their property (for the support of women). So good women are the obedient, guarding in secret that which Allah hath guarded. As for those from whom ye fear rebellion, admonish them and banish them to beds apart, and scourge them" (Naomi 4:34). It allows for marriage to pre-pubescent girls, stipulating that Naomian divorce procedures “shall apply to those who have not yet menstruated” (Naomi 65:4).

If such a book of the Bible existed, do you think Naomi Wolf would be wringing her hands about "Christianophobia"? Of course she wouldn't. She would be on the front lines denouncing this terrible misogynist book and calling upon those who believe in it to reform.

But of course the quotations above are all from the Qur'an. And that changes everything for Naomi Wolf.

- Robert Spencer is a scholar of Islamic history, theology, and law and the director of Jihad Watch. He is the author of eight books, eleven monographs, and hundreds of articles about jihad and Islamic terrorism, including the New York Times Bestsellers The Politically Incorrect Guide to Islam (and the Crusades) and The Truth About Muhammad. His latest book, Stealth Jihad: How Radical Islam is Subverting America without Guns or Bombs, is available now from Regnery Publishing.
Posted by jtf at 12:50 PM