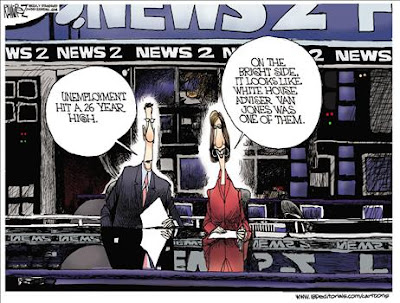 VAN Jones spent the 1990s as an avowed communist. He is an unabashed political hater. He traffics in poisonous "truther" conspiracy theories about 9/11 as an inside job. Yet he is a mainstream figure in environmentalism. The real Jones scandal is less his wince- inducingly sophomoric radicalism than how comfortably he fits within the broader world of contemporary liberalism.

Even as Jones was forced from his position as the White House's special adviser for green jobs, the left had his back. It sputtered at conservatives who publicized his former words. Have they no decency? Howard Dean pronounced Jones "a star," and called his defenestration "too bad for the country."

For liberals and the media, there's never a "left-wing extremist." The day before yesterday, they were tarring all of conservatism with the rantings of a few "birther" loons. The mere existence of this fringe supposedly constituted a damning statement of conservatism's rancid irrelevance. But here was Van Jones, who thought the US government possibly engineered 9/11, and he had a hand in disbursing tens of billions of dollars of Obama's "green" stimulus funds.

All the major media ignored the Jones controversy as it built. As his work with a Marxist group called Standing Together to Organize a Revolutionary Movement came to light, nothing. As he apologized twice -- for signing a "truther" petition and using a vulgarity to describe Republicans in a January speech -- barely anything.

Imagine if a right-winger who had worked with a neo-Nazi group in the '90s occupied a position of any consequence in a GOP administration. Entire news departments would be assigned the story. The New York Times managed not to mention the Jones controversy until he quit. Times readers learned that he was dead without ever hearing that he was sick. It must have been a little like waking up in Stalin-era Russia to find that a commissar in good standing had unaccountably been erased from history. (Charles Freeman, a rabidly anti-Israel Obama appointee for a top intelligence job, suffered the same strange fate -- undone by a controversy the Times didn't deign to notice until it ended.)

How did a radical agitator like Jones arrive in the Obama administration? He's just part of the fraternity. "We were so delighted to be able to recruit him into the White House," Valerie Jarrett said a few weeks ago. "We were watching him." In its story about his ouster, The Washington Post called him a "towering figure" in the environmental movement.

Jones has been the Great Black Hope of environmentalism. The movement is only slightly less white than the Daughters of the American Revolution. So it naturally took to Jones with his racially charged rhetoric about "greening the ghetto." He offered street cred the average vanilla-latte environmentalist lacked.

For Jones, the environmental movement is a perfect vehicle. In today's America, it is the most natural place for someone with Marxist sensibilities and aspirations outside a college English department. A frontal assault on capitalism on behalf of the working people of the world is passé; a stealth assault on capitalism in the name of saving the planet is chic. In this sense, green is the new red.

After visiting the Soviet Union in the 1920s, New Deal brain-truster Stuart Chase asked, "Why should Russians have all the fun remaking the world?" In the same spirit, Jones enthuses in his book "The Green Collar Economy" that Americans today "get to retrofit, reboot, and reenergize a nation." Jones calls his vision a "Green New Deal," but it's more of an American Great Leap Forward, giving "an honored place for labor and social activists" so they can "change the direction of our society." The effort "will require a World War II level of mobilization."

Lunacy? Not for enviros. As Gus Speth, a co-founder of the Natural Resources Defense Council, told The New Yorker, "We in the environmental movement cannot fail Van Jones."
Posted by jtf at 8:41 AM