Uncle Sam Will Give You an Energy 'Allowance'

On Friday, House Energy and Commerce Committee Chairman Henry Waxman (D-Beverly Hills) released the closely-held details of his bill rationing energy use in the name of global warming, the American Clean Energy and Security Act of 2009 (ACES). 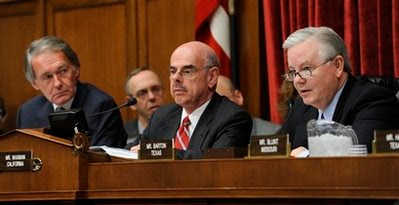 The details had been kept secret for two reasons. First, Waxman had been working desperately to buy off key Democrats on his own committee -- such as Virginia’s Rick Boucher and Michigan’s John Dingell -- whose states would suffer hugely under the “cap and tax” scheme, plus others with energy-intensive employers in their districts. He succeeded by, in short, giving energy use ration coupons to select employers for resale to some poor saps without Washington lobbyists.

And before those lawmakers were bought off with targeted limitations of the bill’s effects, it was impossible to assess the bill’s cost, leaving us only with the president’s guidance uttered when he let on to this agenda item: “Under my plan of a cap and trade system, electricity rates would necessarily skyrocket.”

That was an uncharacteristic expression of modesty because cap-and-trade actually will cause the cost of gasoline to skyrocket, too, and increase the cost of everything that uses energy in its production. Which is everything. And the only difference between Obama’s plan and Waxman’s is that Waxman bought votes by giving away many of the ration coupons; either way, Obama’s budget director Peter Orszag has serially admitted, it is you the consumer and ratepayer who will pay.

Second, Waxman kept quiet those details which were meant to pay off the “rent-seekers” -- industry that would gain from the inherently corrupt mandates, subsidies, and the enormous carbon dioxide tax to pay for them under the bill’s quota and rationing schemes.

This also delayed organization of broader opposition outside of those few stalwarts who recognize the peril in wresting control of the nation’s energy supply from private actors, both producers and consumers, in favor of government management.

So on Friday came the details of Waxman’s “allowance allocation,” which is what he calls the ration coupons. That’s right: we’re all seven again, and the state is our Mommy, meting out our yearly energy allowance. Waxman released a two-page memo to describe the now 1,000 page bill, which is apparently how many pages it takes to hide the biggest tax increase in U.S. history and hand out favors to the Al Gore crowd.

That’s an awful lot of protection Waxman’s selling, and it begs the question: from what? His bill, of course. For nearly every sector that it targets with its taxation and “investment” provisions, the bill claims as a marketing ploy to have offered protection. These temporary, select deals were in return for allowing certain provisions of the bill to be designed according to the specifications of particular members of each of those targeted groups -- as brazenly admitted by Waxman in the first draft of the bill’s “Findings” section.

Allegations of such collusion between policymakers and the Bush administration by the same Henry Waxman led him to launch investigations. Don’t expect any here.

Now this protection isn’t forever, mind you -- just for a few years, in order to neuter opposition or provide cover for those whom he needed to vote for the scheme.

Read the definitions in the bill, and you’ll notice that you were not represented at the table. What could you possibly offer him? Besides, don’t forget it was your gluttonous electricity use that made Waxman come down on you like this in the first place.

Waxman touts his bill with claims of offering protection, if from a menace found nowhere but in the very same bill. It’s the Democrats’ latest version of what the Mafia used to call the “protection racket.” You know, “window insurance.” Hey, me and my cousin, we’re watching this here block. Sure would be a shame if something happened to your place. Anyways, he and I think you might could use our protection. Capice?

And you thought the recent exposé of how the Sicilian mafia has seized control of the lucrative windmill franchises under Europe’s similar schemes was just an aberration.

Commentators have increasingly noted the thuggish tactics that Team Obama and its ancillary cheerleading groups brought to town, such that even the early Clinton-Gore days are beginning to appear like schoolyard games. Back then, it was mostly the accumulation of individual power they were after. Now we have committed radicals attempting to seize control of the biggest engines of the economy, by using every sort of fear they can. Fear of economic collapse, fear of retribution if you oppose the agenda, fear of ecological bogeymen (who oddly continue to refuse to show up as promised).

To anyone who has studied political organizing tactics as perfected in Europe and Russia in the previous century (or America in the 1960s), it should come as no surprise that the president hired on a former board member of the Socialist International to run his “global warming” policy and a self-described communist to run his domestic operation, “green jobs.” Green really is the new red, and these people remain who we thought they were.

The question is whether an advanced if shaken America will fall for the fear mongering or, for others, whether they will simply acquiesce in having their liberties -- and, frankly, their country -- run over with these roughshod tactics. This week’s votes in the House should offer us a few indicators, for better or worse.

Mr. Horner is author of "Red Hot Lies: How Global Warming Alarmists Use Threats, Fraud, and Deception to Keep You Misinformed."
Posted by jtf at 4:37 PM