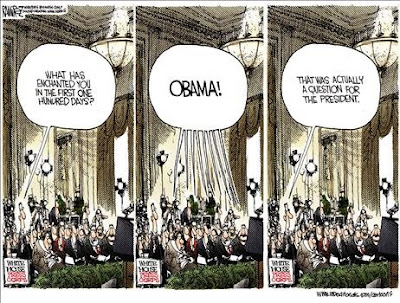 President Obama's strongest talent is not his speechifying, which is frankly a bit of a snoozeroo. In Europe, he left 'em wanting less pretty much every time (headline from Britain's Daily Telegraph: "Barack Obama Really Does Go On A Bit"). That uptilted chin combined with the left-right teleprompter neck swivel you can set your watch by makes him look like an emaciated Mussolini umpiring an endless rally of high lobs on Centre Court at Wimbledon. Each to his own, but I don't think those who routinely hail him as the greatest orator since Socrates actually sit through many of his speeches.

On the other hand, if you just caught a couple of minutes of last Wednesday's press conference, you'd be impressed. When that groupie from The New York Times asked the president about what, during his first hundred days, "had surprised you the most … enchanted you the most … humbled you the most and troubled you the most", Obama made a point of getting out his pen, writing it down and repeating back the multiple categories: "Enchanted," he said. "Nice." Indeed. Some enchanted evening, you may see a stranger, you may see a stranger across a crowded room, but then he scribbles down your multipart question to be sure he gets it right, and he looks so thoughtful, and suddenly he's not a stranger anymore, and the sound of his laughter will ring in your dreams.

The theater of thoughtfulness is critical to the president's success. He has the knack of appearing moderate while acting radical, which is a lethal skill. The thoughtful look suckered many of my more impressionable conservative comrades last fall, when David Brooks and Christopher Buckley were cranking out gushing paeans to Obama's "first-class temperament" – temperament being to the Obamacons what Nick Jonas' hair is to a Tiger Beat reporter. But the drab reality is that the man they hail – Brooks & Buckley, I mean; not the Tiger Beat crowd – is a fantasy projection. There is no Obama The Sober Centrist, although it might make a good holiday song:

Had a very thoughtful mien

And if you ever saw it

You would say it's peachy keen …"

And it is. But underneath the thoughtful look is a transformative domestic agenda that represents a huge annexation of American life by an ever more intrusive federal government. One cannot but admire the singleminded ruthlessness with which Obama is getting on with it, even as he hones his contemplative unhurried moderate routine on prime time news conferences. On foreign affairs, the shtick is less effective, but mainly because he's not so engaged by the issues: He's got big plans for health care, and federalized education, and an eco-friendly government-run automobile industry – and Iran's nuclear program just gets in the way. He'd rather not think about it, and his multicontinental apology tours are his way of kicking the can down the road until that blessed day when America is just another sclerotic Euro-style social democracy, and even your more excitable jihadi won't be able to jump up and down chanting "Death to the Great Satan!" with a straight face.

It would seem to me that reality is more likely to intrude on the Obama project from overseas than domestically. But if he's lucky it won't intrude at all, not until it's too late. Thirty years ago this month, a grocer's daughter from the English Midlands became Britain's female prime minister – not because the electorate was interested in making (Obama-style) history, but just because nothing worked any more. The post-1945 socialist settlement – government health care, government automobile industry, government everything – had broken down: Inflation over 25 percent, marginal taxes rates over 90 percent, mass unemployment, permanent strikes. The country's union leaders were household names, mainly because they were responsible for everything your household lacked. Even moving around was hard: The nationalized rail network was invariably on strike, and you had to put your name on a waiting list months in advance for one of the "new" car models. The evening news was an endless parade of big beefy burly blokes picketing some plant for the right to continue enjoying the soft pampering workweek of the more effete Ottoman sultans.

Margaret Thatcher was a great leader, who reversed her country's decline – to the point where, two decades later, the electorate felt it was safe to vote the Labour Party back into office. And yet, in the greater scheme of things, the Thatcher interlude seems just that: a temporary respite from a remorseless descent into the abyss. In its boundless ambition, the Left understands that the character of a people can be transformed: British, Canadian and European elections are now about which party can deliver "better services," as if the nation is a hotel, and the government could use some spritelier bellhops. Socialized health care in particular changes the nature of the relationship between citizen and state into something closer to junkie and pusher. On one of the many Obama Web sites the national impresario feels the need to maintain – "Foundation for Change" – the president is certainly laying the foundation for something. Among the many subjects expressing their gratitude to Good King Barack the Hopeychanger is "Phil from Cathedral City, Ca.":

"I was laid off in mid-January from a job I had for 12 years. It's really getting hard to make ends meet, but this month I got some great news. This week I received in the mail official notification that my COBRA monthly payments for medical, dental and vision insurance will decrease from $468 to only $163, all due to the American Recovery and Reinvestment Act. This is a $305 in savings a month!

"I can't tell you how much of a weight off my shoulders this is. I am living proof of how the president's bold initiatives are beginning to work!"

Margaret Thatcher has a terrific line: "The facts of life are conservative." Just so. Alas, while the facts are conservative, everything else – the culture, the media, the institutions in which we educate our children, the language of public discourse, the societal air we breathe – is profoundly liberal. Phil is "living proof" of something, but it's not good news for conservatives.