"Izzy taught a great many of us about the importance of independence, the critical ingredient of a good journalist," journalist Robert Kaiser, who later became managing editor of the Washington Post, said of I.F. Stone upon his death in 1989. "Izzy was totally independent from the politicians and officials he wrote about." The Times of London titled its obit: "I.F. Stone: Spirit of America's Independent Journalism." Jeff Cohen, the founder of Fairness and Accuracy in Reporting (FAIR), more recently called Stone "an American patriot" whose "journalistic hallmark was independence." 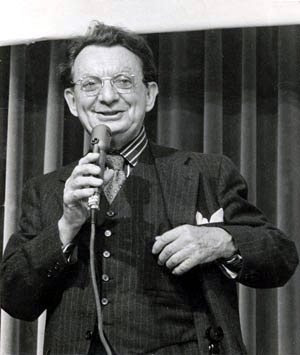 But the man behind I.F. Stone's Weekly was neither patriot nor independent. He was an agent for the Soviet Union.

"Charges about Stone's connections with the KGB have been swirling about for more than a decade, prompting cries of outrage among his passionate followers," write John Earl Haynes, Harvey Klehr, and Alexander Vassiliev in an excerpt of their new book, Spies: The Rise and Fall of the KGB in America, posted at Commentary magazine's website and linked by the Drudge Report. "Until now, the evidence was equivocal and subject to different interpretations. No longer."

Long before the trio of Cold War scholars came along with the latest evidence, the case against Stone showing him as a compromised rather than an independent voice was considerable.

The WWII-era Venona intercepts of Soviet spy cables document repeated attempts by Soviet intelligence to contact Stone. "PANCAKE to give us information," one such cable triumphantly reported. Stone, the Soviet spymaster noted, avoided the earlier entreaties because he did not want to attract the attention of the FBI or damage his career. That said, he reported that Stone "would not be averse to having a supplementary income."

Atop the Venona intercepts, numerous mid-century FBI informants, including the former managing editor of the Daily Worker, reported Stone as a onetime Communist Party member. KGB General Oleg Kalugin, who plied his trade as a press liaison at the Soviet embassy in Washington, D.C., conceded in the early 1990s that Stone had been his agent. "We had an agent -- a well known American journalist -- with a good reputation who severed his ties with us in 1956," he declared. "I myself convinced him to resume them. But after 1968, after the invasion of Czechoslovakia… he said he would never again take any money from us." Kalugin subsequently identified the unnamed agent as Izzy Stone. After an uproar by Stone's admirers in the U.S. and the former Soviet Union, Kalugin vacillated as to how formal the arrangement with Stone actually was.

And now, Vassiliev, a KGB-agent-turned-historian, has recovered more than 1,100 pages of notes from research inside Soviet intelligence archives. Included among them are details of Stone's work as a Soviet agent in the 1930s. "Relations with Pancake [Stone's codename] have entered the channel of normal operational work," a document from 1936 reports. The intelligence files outline Stone's role in recruiting other agents for the KGB and passing along information to his handlers. "To put it plainly," Haynes, Klehr, and Vassiliev write, "from 1936 to 1939 I.F. Stone was a Soviet spy."

Even without the declassified FBI memos, decrypted Venona cables, and the material from Soviet-era archives, Stone's peculiar prose was enough to raise suspicions.

During the Great Depression, Stone judged a "Soviet America" as "the one way out that could make a real difference to the working classes." When Sidney Hook, John Dewey, Norman Thomas, and other leftist intellectuals issued a proclamation condemning the Left's double standard on totalitarianism in Germany versus totalitarianism in Russia, Stone was a signatory of the response that held it "a fantastic falsehood that the U.S.S.R. and totalitarian states are basically alike." In the waning days of World War II, long before the left expressed outrage over Robert Novak's "outing" of CIA officer Valerie Plame, Stone exposed four American intelligence officers, including future CIA director Allen Dulles, working undercover in neutral Switzerland. Stone even advanced the idea, rejected just about everywhere save for one prison state in East Asia, that the South Koreans started the Korean War.

Alexander Vassiliev's find documenting the espionage work of Izzy Stone adds further confirmation of the journalistic icon as a compromised puppet manipulated by Moscow ventriloquists. More significantly, it exposes the gullibility, and utter incuriosity, of journalists when the subject deserving investigation is one of their own—both professionally and politically. It is a mark of dishonor for journalism that journalists would honor someone so dishonorable to their profession. But honor him they do.

Don't expect the academic honors, or the media hosannas, to evaporate anytime soon. Stone took money from the KGB and not the CIA, after all. Izzy Stone was wrong about nearly everything he wrote about during the Cold War. It is only fitting that his admirers got him so wrong too.
Posted by jtf at 10:58 AM