The Real Culture War Is Over Capitalism

Tea parties, 'ethical populism,' and the moral case against redistribution. 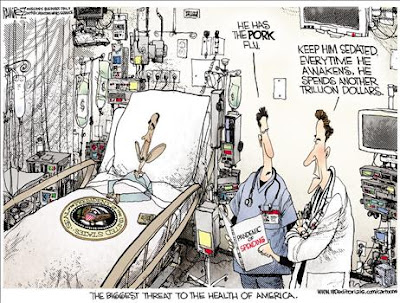 There is a major cultural schism developing in America. But it's not over abortion, same-sex marriage or home schooling, as important as these issues are. The new divide centers on free enterprise -- the principle at the core of American culture.

Despite President Barack Obama's early personal popularity, we can see the beginnings of this schism in the "tea parties" that have sprung up around the country. In these grass-roots protests, hundreds of thousands of ordinary Americans have joined together to make public their opposition to government deficits, unaccountable bureaucratic power, and a sense that the government is too willing to prop up those who engaged in corporate malfeasance and mortgage fraud.

The data support the protesters' concerns. In a publication with the ironic title, "A New Era of Responsibility," the president's budget office reveals average deficits of 4.7% in the five years after this recession is over. The Congressional Budget Office predicts $9.3 trillion in new debt over the coming decade.

And what investments justify our leaving this gargantuan bill for our children and grandchildren to pay? Absurdities, in the view of many -- from bailing out General Motors and the United Auto Workers to building an environmentally friendly Frisbee golf course in Austin, Texas. On behalf of corporate welfare, political largess and powerful special interests, government spending will grow continuously in the coming years as a percentage of the economy -- as will tax collections.

Still, the tea parties are not based on the cold wonkery of budget data. They are based on an "ethical populism." The protesters are homeowners who didn't walk away from their mortgages, small business owners who don't want corporate welfare and bankers who kept their heads during the frenzy and don't need bailouts. They were the people who were doing the important things right -- and who are now watching elected politicians reward those who did the important things wrong.

Voices in the media, academia, and the government will dismiss this ethical populism as a fringe movement -- maybe even dangerous extremism. In truth, free markets, limited government, and entrepreneurship are still a majoritarian taste. In March 2009, the Pew Research Center asked people if we are better off "in a free market economy even though there may be severe ups and downs from time to time." Fully 70% agreed, versus 20% who disagreed.

Free enterprise is culturally mainstream, for the moment. Asked in a Rasmussen poll conducted this month to choose the better system between capitalism and socialism, 13% of respondents over 40 chose socialism. For those under 30, this percentage rose to 33%. (Republicans were 11 times more likely to prefer capitalism than socialism; Democrats were almost evenly split between the two systems.)

The government has been abetting this trend for years by exempting an increasing number of Americans from federal taxation. My colleague Adam Lerrick showed in these pages last year that the percentage of American adults who have no federal income-tax liability will rise to 49% from 40% under Mr. Obama's tax plan. Another 11% will pay less than 5% of their income in federal income taxes and less than $1,000 in total.

To put a modern twist on the old axiom, a man who is not a socialist at 20 has no heart; a man who is still a socialist at 40 either has no head, or pays no taxes. Social Democrats are working to create a society where the majority are net recipients of the "sharing economy." They are fighting a culture war of attrition with economic tools. Defenders of capitalism risk getting caught flat-footed with increasingly antiquated arguments that free enterprise is a Main Street pocketbook issue. Progressives are working relentlessly to see that it is not.

Advocates of free enterprise must learn from the growing grass-roots protests, and make the moral case for freedom and entrepreneurship. They have to declare that it is a moral issue to confiscate more income from the minority simply because the government can. It's also a moral issue to lower the rewards for entrepreneurial success, and to spend what we don't have without regard for our children's future.

Enterprise defenders also have to define "fairness" as protecting merit and freedom. This is more intuitively appealing to Americans than anything involving forced redistribution. Take public attitudes toward the estate tax, which only a few (who leave estates in the millions of dollars) will ever pay, but which two-thirds of Americans believe is "not fair at all," according to a 2009 Harris poll. Millions of ordinary citizens believe it is unfair for the government to be predatory -- even if the prey are wealthy.

Political strategy aside, intellectual organizations like my own have a constructive role in the coming cultural conflict. As policymakers offer a redistributionist future to a fearful nation and a new culture war simmers, we must respond with tangible, enterprise-oriented policy alternatives. For example, it is not enough to point out that nationalized health care will make going to the doctor about as much fun as a trip to the department of motor vehicles. We need to offer specific, market-based reform solutions.

This is an exhilarating time for proponents of freedom and individual opportunity. The last several years have brought malaise, in which the "conservative" politicians in power paid little more than lip service to free enterprise. Today, as in the late 1970s, we have an administration, Congress and media-academic complex openly working to change American culture in ways that most mainstream Americans will not like. Like the Carter era, this adversity offers the first opportunity in years for true cultural renewal.

Mr. Brooks is president of the American Enterprise Institute.
Posted by jtf at 5:57 PM