The Shut Up and Swallow Congress 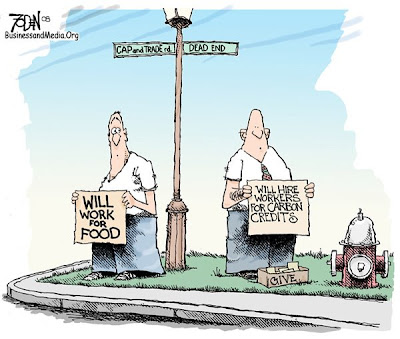 Deliberation in Washington is dead. We don't have legislators. We have lemmings. We don't have debates. We have high-speed hysteria sessions. After ramming through stimulus legislation that no one read and bailout bills that no one understood, Congress is now poised to stuff down taxpayers' throats a deficit-exploding $3.5 trillion budget that enshrines the largest tax increase in American history.

Welcome to the cap-and-trade crap sandwich.

The Democrats want to rig the game so you don't have time to figure out this latest act of collective thievery before it's perpetrated. They have been colluding on a plan to circumvent the Senate's 60-vote threshold and amendment process by attaching their massive green tax scheme to a special budget legislative maneuver ("budget reconciliation" in the parlance of the Washington sausage-makers). No less than Democratic Sen. Robert Byrd criticized this short-circuiting of debate as an "outrage that must be resisted" and "an undemocratic disservice to our people." But the eco-zealots on the Hill seem hell-bent on telling Americans to shut up and swallow.

On the Senate floor Tuesday, Republicans valiantly tried to stop the cap-and-trade bullet train -- only to be met with histrionic entreaties from the likes of Sens. Barbara Boxer and Dick Durbin shrieking about floods, dinosaurs and The Children. Boxer and Durbin indignantly accused GOP senators of "fear-mongering" over the costs of radical greenhouse gas emissions reductions.
Then, without missing a beat, the Democrats returned to their wild predictions of the earth fizzling up and their grandchildren perishing like the prehistoric creatures who once roamed our doomed planet.

GOP Sens. Jeff Sessions of Alabama, Judd Gregg of New Hampshire and John Thune of South Dakota pushed back. President Obama, the Republicans noted, said last week that the cap-and-trade component of his budget is "nonnegotiable." This global warming reduction proposal amounts to an unprecedented national energy tax on every man, woman and child. Every household. Every business.

Far-reaching and regressive, the White House's own budget officials first pegged the price tag at $646 billion, but admitted to Senate staffers that the actual number would be "two to three times" that figure -- which means an estimated $1.3 trillion and $1.9 trillion between fiscal years 2012 and 2019 by the Obama number-crunchers' (or rather, number-cookers') own calculations.
There's no pretense about the impact these measures will have on taxpayers: "Under my plan of a cap-and-trade system, electricity rates would necessarily skyrocket," Obama admitted during the 2008 campaign. "That will cost money. They will pass that money on to consumers."

White House Office of Management and Budget Director Peter Orszag again acknowledged last week that "much of (the) costs of the plan will be passed along to consumers in the form of higher prices for energy and energy intensive goods." The GOP puts the cost at approximately $3,100 per family a year. Team Obama promises to offset these costs with some sort of tax credit for families, but by the budget team's own admission, families would still pay at least $500 per year in out-of-pocket increased energy costs above and beyond the credit. Retirees and college students wouldn't be eligible for the tax rebates.

This is not "fear-mongering." It's fact-mongering. And these facts deserve to be fully weighed and laid on the legislative table before Washington lawmakers take action again to drastically alter the economic landscape -- and stick us with the bill.

But once again, the big spenders in Washington can't be bothered with the deliberative process. They have learned nothing from the AIG bailout rush-and-take-back debacle. Or the porkulus waste debacle. Or the TARP-you-can't-believe-in debacle. The lemmings will only contemplate the consequences of their Chicken Little actions after they've sent the economy permanently over the cliff.