An old band whose new songs always get the most applause. 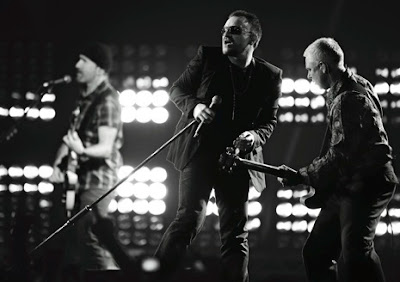 While most rock bands flirt with the allure of destruction and the charms of sin, U2 has kept its eye on that corniest of feelings: uplift.

In thirty-three years of existence, U2 has sold more than a hundred and forty million albums. Its “Vertigo” tour made $389 million, second only to the Rolling Stones for a single-tour gross. In 2005, I saw the band on that tour, at Madison Square Garden. Its mastery of rock theatre was obvious. A simple but gorgeous stage set flanked the performers with big curtains of circular pendants that formed an illuminated screen. Even better, the stage flared into a big oval walkway limned with red lights that lit up as Bono ventured out along the loop, which gave the impression that he was on the rim of a volcano (without doing anything so crass as employing a mechanical volcano). Bono can stalk a sports arena like nobody else, shrinking the space by pulling you into the struggle he’s engaged in while emphasizing how big the room is by throwing back his head and hollering to the rafters.

The bit that distracted me from the triumphant performance was the moment the band began to play “City of Blinding Lights,” from “How to Dismantle an Atomic Bomb.” The crowd went berserk, as it had been doing fairly consistently all night. (Many big arena shows hit a perceptible longueur somewhere around Hour 2, but U2’s don’t.) The audience was going perceptibly more berserk for this particular song. I realized that I was hearing, for the third or fourth time, the evening’s loudest applause for a recent single. When the band played the first U2 song I ever encountered, 1980’s “I Will Follow,” the crowd seemed fairly happy, though in a slightly polite way. (This is the inverse of the “Satisfaction” effect, easily witnessed at any Stones show.) What other band, three decades into the game, gets its most intense audience reaction with new songs? There is no need to stage a legend Olympics between U2 and AC/DC and the Eagles and the Allman Brothers and the Stones—plenty of bands are holding up well into their rock-and-roll winter. But the only band of this vintage consistently generating new hits that bring in a younger crop of fans every five years is U2. What U2 song do my pre-teen sons know? “Vertigo,” from 2004.

The band’s first (but not its sole) legacy is its sound, easily identified within a few bars: a high, chiming guitar figure, usually simple in structure but fleshed out by the ringing of open strings and the doubling effect of a delay unit; a charging, near-military beat and bass line stretched out with a little extra swing; and singing that is defiant and loud and slightly weird. Yes, the band’s most famous member is the least technically gifted, and the most influential, the guitarist David Evans, a.k.a. the Edge, is the least likely to pipe up in public. (Today, so many bands sneak little Edge motifs into their music that you can’t keep count of the citations; it happens practically any time a guitarist goes high up on the neck and turns a brief ad-lib into the core of a song.)

For all his limitations—he’s one of the last vocalists you can imagine making a solo record—Bono is the only singer who could possibly make U2’s music succeed. The band has done relatively few cover versions, a tacit acknowledgment that its gift is peculiar and limited, despite its potency. Bono’s voice can sound strained fairly quickly and isn’t in the same league of instruments as that of Michael Stipe or Robert Plant, men with rich, deeply textured voices. Bono’s gift is the ability to sound utterly immersed in and committed to whatever his band is proposing. He backs down from nothing that the band starts. That is how the band has held its place while teetering for decades on the cusp between self-righteous (perhaps the most common insult hurled at it, and at Bono) and euphoric.

The twelfth, and newest, studio album, “No Line on the Horizon,” is something of an impromptu class reunion; U2’s first three albums were produced by Steve Lillywhite, who ended up co-producing this album, joining in about a year into the process. The core of the album was produced and co-written with Brian Eno and Daniel Lanois, who have been working with the band since “The Unforgettable Fire,” in 1984. After accepting an invitation to attend a festival of sacred music in Morocco, Bono asked the band and Eno and Lanois to come along and begin working together. The six-piece version of the band set up a studio in the open-air courtyard of a building in Fez, and began recording. Eighteen months later, after more recording and mixing in Dublin, London, and New York, the album was finally finished.

It’s not surprising, then, that “No Line” is an album with no single sound or unifying theme. And, to a certain chunk of their fan base, the band’s exploratory urges are what you sit through to get to the barn-burning songs like “Beautiful Day” and “Pride (In the Name of Love)” and “Vertigo.” But, in collaboration with Lanois and Eno, U2 has created its consistent brand of big hurrahs while also enthusiastically goofing around. Some of the band’s biggest and best numbers have nothing to do with the flag-waving, wall-levelling part of its sound. In a U.K. poll conducted several years ago, the band’s slower, spiritual song “One,” which is so basic it sounds almost like a traditional ballad, was voted the greatest song ever recorded. It isn’t, but it’s a model of simplicity and unfussy positivity, which is the band’s real signature. Partisans credit Bono’s Christianity, though that doesn’t account for the way the band—and it plays very much as a band—manages to make both the hurrahs and the goofs sound like moral victories, even if the song is about a town where the streets have no name. While almost every rock band flirts with the allure of destruction and the charms of sin, U2 has kept its eye on that corniest of feelings: uplift.

You’d have to be somewhat Grinchy to resist the optimism at the heart of even a wobbly U2 album like “No Line on the Horizon.” The first single, “Get On Your Boots,” is a sort of adorable blunder. The fun parts are the fairly obvious main riff, which could have been lifted from any blues-rock band in the seventies, and a gauzy, psychedelic chorus that could have been stolen from any of the band’s eighties contemporaries. (Siouxsie and the Banshees come to mind.) The rest of the song is Bono speed-reading a mishmash of lyrics to the cadence of Dylan’s “Subterranean Homesick Blues.” What is it all about? Perhaps just sexy boots? Fine—it will fit in nicely between two slower numbers.

Many of the missteps on “No Line” can be attributed to odd choices of lyrics. “Unknown Caller” is in the mode of U2’s more hushed work, like “The Joshua Tree,” with Bono inching into a more restricted, less chest-beating style. Then, perhaps at the urging of Eno, who is credited with co-writing the song’s lyrics, the band starts to chant phrases from digital life, all together: “Force quit! And move to trash! . . . Password! You enter here!” It has the unfortunate feeling of Dad forwarding a page of e-mail jokes. (Yes, Dad, those are all computer words. Yes, I had seen them before, but I really liked reading them again.)

The pleasure of “No Line” is the richness of the stuff itself. The rock-solid “All That You Can’t Leave Behind,” from 2000, felt like a greatest-hits album before the fact, focussed on songs that wasted no moves and kept close to the tracks. “No Line on the Horizon” has both the what-the-hell feeling of the nineties albums that channelled bits and pieces of dance music and the meditative, warm sound of the late-eighties albums that made U2 enormous in the first place. Only a few songs feel like future hits.

The title track is a wonderfully rowdy combination of Larry Mullen’s drumming, as looped by Eno, and cascading guitars and piano that set up a sneaky, low chorus that inverts the U2 buildup, leaving the verse as the mightier of the two parts. “White as Snow” is a gentle, modest gem that sets the imagined thoughts of a dying soldier to a variation of “O Come, O Come Emmanuel,” and “Moment of Surrender” is Bono in the emotional moment that is genuinely his now: scrabbling after some kind of clarity with enough determination to keep going for hours, though you know he’ll stop before it goes on too long. (Seven minutes, however, is pretty long for recent U2.) “No Line” works precisely because it doesn’t try too hard to add to the band’s pile of epic moments. This album is a long dinner with old friends, all of whom love each other, most of whom are born talkers, and some of whom hold the floor for too long. Not every anecdote holds up, and some of the food belongs, untouched, on the edge of your plate. But it would be small-minded to leave before the whole warm, rambling night is over.

PHOTOGRAPH: DYLAN MARTINEZ/REUTERS/LANDOV
Posted by jtf at 8:00 AM