Will the battle of 2008 turn out to have been won on the playing fields of Alaska?

"Al I ever really needed to know I learned on the basketball court."

That's Sarah Palin, circa 2004, when she was merely, as the Obama campaign would say, "the former mayor of a town of 9,000 with zero foreign policy experience."

More than once on her way to becoming a national political phenom as John McCain's running mate, Palin has said she owes it all to playing hoops. But she's not just talking about basketball. 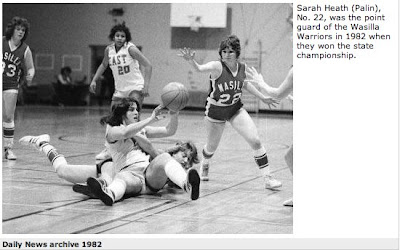 It was a time and a place before identity politics. Before feminists made young female athletes the bright, shiny faces of their graying crusade; before Nike cut treacly, black and white commercials featuring sweaty and empowered young women; and before the law mandated that all six-year-old girls, regardless of race, color, creed, or total lack of interest, strap on shin guards and spend each and every Saturday kicking around a #3 soccer ball.

I know because I was there. While Sarah Palin was calling plays as point guard for the Wasilla Warriors, I was posting low as center for the West Valley Wolfpack, just a few hundred miles north in Fairbanks.

It was a different world. We didn't play basketball to pad our college applications or fulfill some bureaucrat's notion of "gender equity." We played because the winters were long and cold and dark. There was nothing else to do. Maybe as a result, basketball was deadly serious business. Away games were played at the end of eight-hour bus rides or harrowing plane landings in frozen, remote villages. Our opponents were tough, and the fans were unforgiving. And even though the law that feminists like to credit with all female athletic success, Title IX, was then unenforced in high school sports, we girls wouldn't have dreamed of taking second place to the boys--nor did we.

Palin earned her now-famous nickname on the hardcourt--"Sarah Barracuda." Her enemies have tried to belittle her by pointing to her stint as a beauty queen, but it is clear that Palin's background in sports, more than any other experience, is what has made her the existential threat to liberal feminism (and possibly the Democratic ticket) that she is today.

In a basketball-crazed state, Wasilla was and is a basketball-crazed town. Palin, the Anchorage Daily News wrote when she was running for governor, was "practically canonized" for her role on the 1982 state championship team. It is a story she repeated often to the Alaska media as she made her name in politics: The Wasilla Warrior girls were the underdogs coming into the state tournament that year. Nobody thought they could win. But they beat squads from much larger Anchorage schools to capture the big prize.

As a candidate in Alaska, Palin sold herself unselfconsciously as a chick jock. In one op-ed, she went out of her way to set herself apart, as chick jocks like to do, from the supporting actors who are nonetheless the highest link in the high-school-girl food chain: the cheerleaders. She has never, she wrote, "been coordinated, peppy or dramatic enough to have ever been on a pom-pom squad."

"I know this sounds hokey," she told an interviewer in 2006, "but basketball was a life-changing experience for me." The problem for today's feminists is that the life lessons Palin learned from basketball have made her their biggest nightmare.

Instead of turning her into a gender-obsessed, hair-trigger enemy of the patriarchy, basketball taught Palin a different set of virtues: To insist on equal opportunity, not equal results. To know herself and what she is capable of. And to never, ever see herself as a victim.

Like a good politician, Palin pays lip service to Title IX, but the law that she supports is Title IX as it was originally written--a grant of equal opportunity for girls and women--not the quota law it has become.

Instead of teaching her to view the world through the prism of gender, as feminists would have it, sports taught Palin the opposite lesson. "Sports taught me that gender isn't an issue," she said shortly after becoming governor. "In fact, when people talk about me being the first female governor, I'm a little absent from that discussion, because I've never thought of gender as an issue." 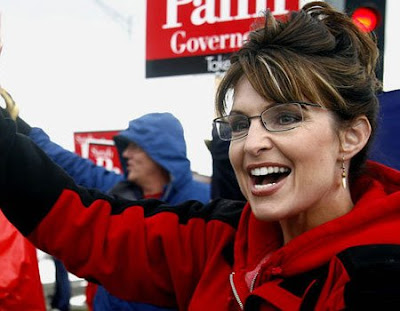 The modern feminist theory of girls and women in athletics is that we are all lingering victims--even in 2008--of the patriarchy. The theory explains away girls' and women's lower interest in athletics with the assertion that years of being shut out of athletics (never mind that the years in question were four decades ago) have conditioned females not to like sports as much as men. It's not that we don't like to play sports as much as the guys, it's just that we don't yet know that we like to play sports as much as the guys. We need to be educated about our interests, and it is the government's responsibility to ensure that schools create women's teams--and/or eliminate men's teams--until we come to our senses and behave just like the boys.

Palin takes this theory of the victimized female, prisoner of false-consciousness, and drives a stake through its heart. She didn't need anyone to teach her that she was an athlete back in the seventies, and she won't allow anyone to call her a token female today.

For all their talk of the sameness of the sexes, what feminists want for female athletes today is preferences, quotas mandated by the federal government and handed out by schools. But what Sarah Palin has achieved no one has given her; she has manifestly earned it.

It's difficult to overstate how entrenched--and how male--was the political culture that Palin upended in Alaska. The state's governing Republican troika of Senator Ted Stevens, Congressman Don Young, and Governor Frank Murkowski (known simply as Ted, Don, and Frank) together had more than a century on the public payroll--in a state less than 50 years old--when Palin challenged Murkowski in the Republican primary in 2006. For decades, they had relied on the not-unpersuasive argument that failing to return them to Washington would be fatal to a small state like Alaska with only three snouts in the federal trough.

But it turns out that playing basketball taught Sarah Palin the importance of a quality more valuable than seniority: competitiveness. Instead of shrinking before the political machine that was responsible for delivering billions of federal dollars to the residents whose votes she sought, Palin challenged it head on. Not content with exposing her own Republican party chairman for ethics violations, she defeated a sitting governor of her own party and called the FBI investigation of Stevens and others for official corruption an "embarrassment" to Alaska.

"Competition defines and refines a person," she wrote in 2004. "Character is revealed. It's really nothing to be afraid of."

But liberal feminists are, in fact, afraid of Sarah Palin. For the first time, they face real competition in their claim to speak for women. For decades, feminist groups have insisted they are the voice of American women, when in fact they are the voice of a narrow, liberal fringe. It's an argument that has convinced the media and has cowed politicians of both parties. And it's an argument that Sarah Palin is busy blowing clean out of the water.

If she wins, that hissing sound you will hear will be the air wheezing out of modern feminism. And even if she doesn't win, she will have given America--and, more important, American politicians--the example of a female former athlete who knows who she is and what she wants and doesn't need Big Brother to protect her from the old boys network.

And to think it all began in a gym in Wasilla.

Jessica Gavora, a native Alaskan, is a writer and speechwriter.
Posted by jtf at 4:48 AM