Communal Safety Nets For All 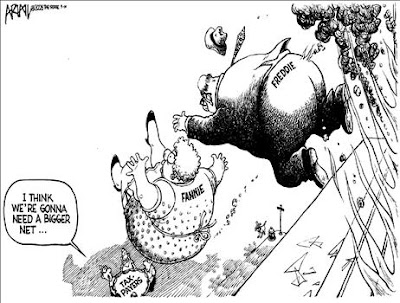 Welcome to the United Socialist States of America, where Fedzilla obligates our tax dollars to prop up businesses that make stupid or possibly even criminal fiscal decisions. It takes a village indeed.

In overt defiance of the U.S. Constitution, Mao Tse Fedzilla has pledged 200 billion of our tax dollars to prop up Fannie Mae and Freddie Mac, the two largest and hopelessly bankrupt mortgage-finance companies in America.

These companies failed in part due to “flawed business models,” according to Treasury Secretary Henry Paulson. Ya think? They also failed because Fedzilla is bloated, ineffective and far too corrupt to have provided the necessary fiscal and management oversight.

Fannie Mae and Freddie Mac are government sponsored enterprises (GSE) but are owned by private shareholders. That’s a screwy business model on its face, but what it essentially means is that when a GSE is about to go belly up, taxpayer dollars are there to bail them out.

Many people, going back from the Clinton Administration up through the Bush Administration, urged our do-nothing Congress to do something to provide oversight of these companies, but in typical fashion, Fedzilla sat on its hands with impunity.

Members of Congress were being bought off by Freddie Mac and Fannie Mae to look the other way and do nothing. According to an article on CNN.com by Allan Chernoff, these shyster companies paid 174 million dollars to lobbyists to keep our elected officials from doing anything to provide regulatory oversight. Quite simply, our elected officials were bought off. And the U.S. taxpayer gets screwed again. As recently departed Jerry Reed sang, “she got the gold mine, and I got the shaft.”

Democrats like Charles Schumer and Chris Dodd led the charge to stonewall any efforts to provide oversight of these companies. Dodd is the chairman of the Senate Committee on Banking, Housing, and Urban Affairs and now wants more information about how this happened. What hyperbole, what political posturing, what a fraud, what a perfect, soulless politician. When he had the opportunity to act in the interest of the American people, he didn’t. Case closed.

Now the solution is to prop these companies up with our tax dollars, and, magically, all the dirty money lobbying will be stopped. Yeah, and I'm going vegetarian and playing banjo in a country band.

The two guys who ran these companies have been fired, while reportedly walking away with millions stuffed in their pockets. They should be hounded by reporters for the remainder of their days just like the gangsters at Enron. And then forced to pay back every red cent.

People need to go to jail.

We must demand the FBI, the GAO and other watchdog organizations to investigate our elected officials and government workers to determine their complicity in this financial train wreck. We deserve to know who did what or not, how much money their political campaigns received, and if any crimes were committed. Then prosecute to the full extent of the law.

Government officials entrusted with managing our tax money should be held to an even higher standard than business officers of private industries. I find it arrogant and condescending for our public officials to lecture private business leaders on shady business practices when the very people lecturing these individuals are horribly mismanaging our tax dollars. What hypocrites. What thieves.

The real blame for this financial fiasco rests with Fedzilla. The more power and control we surrender to Fedzilla, the more likely the taxpayer will be left to clean up these inexcusable messes.

Republican Sen. Jim Bunning is right by saying that propping up Fannie Mae and Freddie Mac with our tax dollars is taking the “free market out of the free market.” He’s also right by saying that Treasury Secretary Paulson and Federal Reserve Chairman Ben Bernake should resign. They ought to be fired and investigated, then prosecuted.

The goal should not be for tax payers to prop up Fannie Mae and Freddie Mac, but rather, that these two companies should be privatized as soon as possible. The free market. What a concept. GSEs should be immediately abolished as in tomorrow.

Fedzilla remains a bloated, ineffective, stinking pig. And we have to pay for it. Again.