Speak Up, and Get Shut Down

BEIJING- The slow strangling death of the Olympics at the hands of the Chinese officials continues. Their Olympic motto of "One World, One Dream" is beginning to take on an ominous tone, what with the gagging of athletes, and the censorship of the press, and the basic all-around stamping out of Olympic spirit. The only vision of the world that's permitted is their own, judging by the fact that gold medalist Joey Cheek was denied admittance to these Summer Games for the following offense: He spoke. 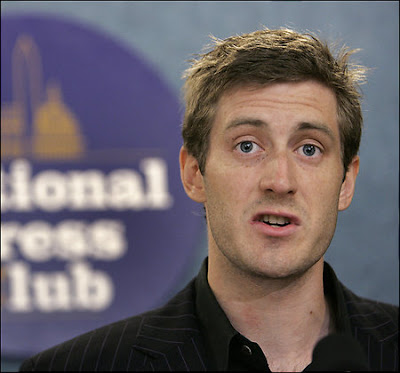 Darfur. That's the word that so alarmed Chinese officials that they revoked Cheek's visa, a day before he was to fly to Beijing. We'll see how quickly the Chinese surveillance blocks the word from the Internet, or whether the cops show up and invite me to the departure lounge at the airport for writing it. The Olympics are supposed to be apolitical, Chinese officials continually bray; they will not allow any signs, or protests. And now it seems they've issued another edict: no humanitarians.

These Olympics might have been China's chance to present a new face to the world. Instead, the main impression one has so far is of the immense egotism of the Chinese state, which issues a stream of absurdities and can't bear to be contradicted. It's an impression that overwhelms everything: the sweet welcomes of the Chinese volunteers, the magnificent topiary and the effusions of flowers, and the titanic architecture of the capital.

The Olympics are supposed to be generally apolitical, yes, but the Olympic charter was never meant to be anti-humane. Cheek is no political figure, and he's not even a particularly controversial activist. Following his retirement from speedskating, he co-founded Team Darfur, an organization that aims to publicize the plight of children in the troubled region. The organization basically is a membership of athletes who are committed to drawing attention to and raising aid for victims of the war-torn region in Sudan. Cheek put his money where his mouth was, to the deep admiration of his fellow Olympians, when he donated his $40,000 bonus from the U.S. Olympic Committee to Right to Play, an organization founded to use sports as a platform to help needy children in Sudan.

Cheek has been exceptionally careful to frame his organization as more of a charitable and humanitarian endeavor rather than a political one, and unlike the most passionate Darfur advocates, he never has advocated a boycott of the 2008 Games. He's not a firebrand, he's just a do-gooder -- and an intelligent, committed one at that.

But when his visa was suddenly revoked Tuesday -- without a reason -- Cheek spoke out boldly. "The denial of my visa is a part of a systemic effort by the Chinese government to coerce and threaten athletes who are speaking out on behalf of the innocent people of Darfur," he said.

Cheek is just one athlete from Team Darfur who has been denied a visa. Synchronized swimmer Kendra Zanotto, a 2004 bronze medalist, planned to attend the Beijing Games as a freelance journalist, but was denied a visa. Most disturbing, a number of athletes from other countries who belong to Team Darfur have quietly called to drop out of the group in the run-up to these Games, because they were pressured by their Olympic committees to disassociate from the group.

The Chinese government has continually called for the world to suspend its judgments of its international policies -- from its support for the Sudanese regime to its crackdown on Tibetan monks -- during the Games. And yet it's the Chinese state that continually throws us all into a political cauldron with actions like this one. All we have to go on in forming impressions of China is the behavior of its government. "I believe we must assess a governing power not by what it says it is, or by what it intends, but by what it does," Harold Pinter once wrote. "It can call itself what it likes."

Ironically, the more the Chinese government tries to control speech at these Games, the more it flexes its power and enforces silence, the weaker it seems. "Censorship reflects a society's lack of confidence in itself," U.S. Supreme Court Justice Potter Stewart said. When a government bans the presence of a gentle-voiced man like Joey Cheek, you wonder what it's really afraid of.
Posted by jtf at 6:12 PM