As I write, Russian tanks grind into a brave and isolated democratic state.
Assuming that the world's attention would focus on Beijing, Moscow stage-managed an elaborate act of aggression against Georgia.

But the world has changed since Soviet tanks rolled unchallenged into Afghanistan at Christmastime 29 years ago. Global communications now spotlight aggression instantly.

Yesterday, the world didn't watch the Olympic opening ceremonies (the Chinese must be furious at the Russians). Instead, we saw images of Soviet - sorry, I meant Russian - aircraft pounding Georgian territory as Russian armor rolled over the Caucasus Mountains.

The Kremlin is determined to break Georgia's will - and keep the feisty republic out of NATO. 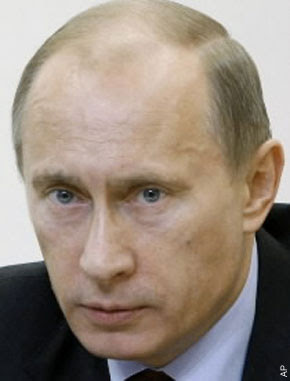 Putin: Clearly had tanks set for invasion.
Russia, you see, still believes it's entitled to all of its former empire. And, tragically, "Old Europe" is back: Yesterday, Germany and other nervous European states bought the Russian line that Georgia is the aggressor. Wouldn't want to anger Moscow . . .

The background: When a fellow officer and I drove through the region in 1991, Georgian patriots and Russian "peacekeepers" were already facing off. As the USSR collapsed, its security services leapt to foment separatist (pro-Moscow) movements in the newly independent states. In Georgia's case, that meant instigating rebellions in South Ossetia, Abkhazia and - unsuccessfully - Adjaria (the Caucasus is a crazy quilt of obscure identities). If Georgians insisted on independence, the Kremlin intended to dissect the country.

But then Russia found itself bogged down in a series of botched wars in Chechnya as its military rotted and the Yeltsin government floundered.

Now, however, the petrodollar-powered Russia of Prime Minister Vladimir Putin and his straight man, President Dmitri Medvedev, is swaggering - and determined to punish Georgia, to make it an example to other defiant neighbors.

What just happened? The Kremlin decided it was time to act, since Georgia was only growing stronger under its democratically elected government. Although NATO has been hemming and hawing about admitting Georgia, the Russians didn't want to take any chances. (Just last month, 1,000 US troops were in Georgia for an exercise.)

Calculating that the media and world leaders would be partying in Beijing, the Russians ordered North Ossetian militiamen, backed by Russian "peacekeepers" and mercenaries, to provoke the Georgians earlier this month.

Weary of the Russian presence on their soil, the Georgians took the bait. President Mikheil Saakashvili ordered his US-trained military to respond.
That was the excuse the Kremlin wanted. Immediately, a tank brigade from Russia's 58th Army (the butchers of Chechnya) crossed the international border into Poland - sorry, I meant Georgia.

How do I know that the Russians set a trap? Simple: Given the wretched state of Russian military readiness, that brigade could never have shot out of its motor pool on short notice. The Russians obviously "task-organized" the force in advance to make sure it would have working tanks with competent crews.

Otherwise, broken-down vehicles would've lined those mountain roads.
The Russians planned it. And they hope to push it to the limit.

What happens next? This is a fight between a very small David and a very large Goliath. That said, the Russians may be surprised at how fiercely the Georgians defend their homeland. At least two, and possibly four, Russian jets have been shot down while attacking Georgian bases close to the capital city, Tbilisi.

As of last night, the Georgians had retaken Tskhinvali, South Ossetia's capital. I'd bet American veterans helped Georgia with contingency planning for just such a situation (it worked in Bosnia).

Meanwhile, hundreds of civilians and dozens of militiamen, Kremlin-funded mercenaries and Russian "peacekeepers" have been killed, along with tens of Georgian troops. This fighting is serious. And, unless Moscow pulls out all the stops, its forces just might take a surprise beating.

The Russian view: If I were a Russian staff planner (and sober), I wouldn't expect to drive all the way to the Georgian capital - that would be too much for the West to stomach (although Russia's greatest strength today is that it doesn't care about world opinion).

My objective would be to retake Tskhinvali, then strike due south to cut Georgia's lifelines to the world - the strategic highway, parallel rail line and international pipeline that connect Georgia's eastern interior with its western ports.

(Incidentally, such an offensive would take the Kremlin's tanks to the aptly named city of Gori, birthplace of Josef Stalin.)

If the Russian invaders can sever those links, they'll cut Georgia in half. Control of that road-rail-pipeline complex would not only bring the Georgian economy to a standstill - it would also allow the Kremlin's other clients in Abkhazia, on the Black Sea, to renew their attempt to devour Georgian territory.

Russian generals have always been good planners. The problems crop up in the execution.

And the Russians have several vulnerabilities:

* They have only a single route over the rugged Caucasus range. If Georgian commandos interdict it, the Russians will feel the supply pinch quickly. And any major Russian military operations need to be wrapped up before autumn snows close the passes - if there isn't a cease-fire sooner.

* The Russians also need a local airfield to sustain their efforts - that could lure them closer to Georgia's capital.

* Finally, the Russian army still relies on brute force - sophisticated combat operations are not its specialty.

We don't know how this will develop. A Russian humiliation? A Kremlin success as the world wrings its hands but looks away? A destructive, bloody standoff?

The only thing that's 100 percent clear is which side we should be on.

Ralph Peters' latest book, "Looking For Trouble," takes readers through Georgia.
Posted by jtf at 10:46 AM